عنوان انگلیسی
Close enough but not too far: Assessing the effects of university–industry research relationships and the rise of academic capitalism
دانلود فوری مقاله + سفارش ترجمه 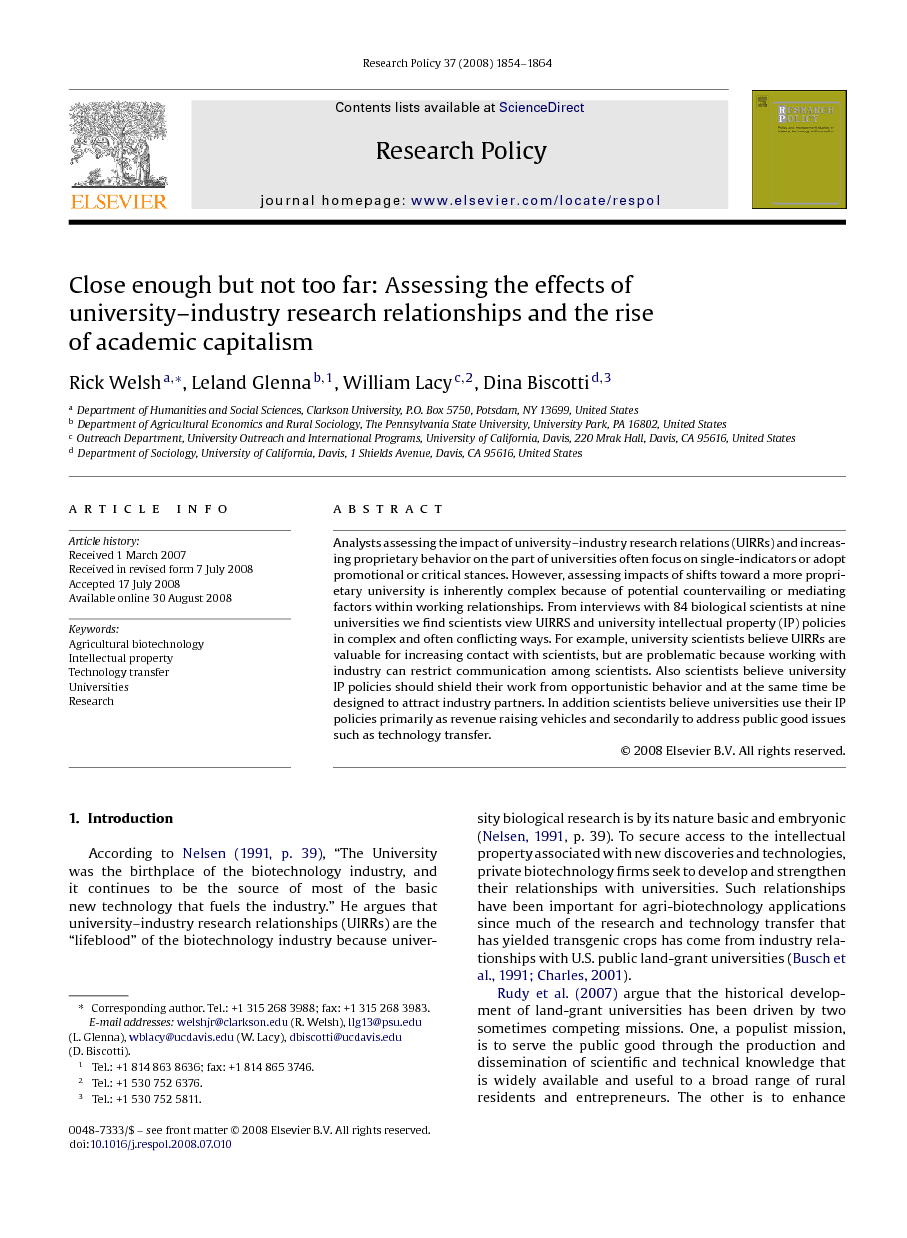 Analysts assessing the impact of university–industry research relations (UIRRs) and increasing proprietary behavior on the part of universities often focus on single-indicators or adopt promotional or critical stances. However, assessing impacts of shifts toward a more proprietary university is inherently complex because of potential countervailing or mediating factors within working relationships. From interviews with 84 biological scientists at nine universities we find scientists view UIRRS and university intellectual property (IP) policies in complex and often conflicting ways. For example, university scientists believe UIRRs are valuable for increasing contact with scientists, but are problematic because working with industry can restrict communication among scientists. Also scientists believe university IP policies should shield their work from opportunistic behavior and at the same time be designed to attract industry partners. In addition scientists believe universities use their IP policies primarily as revenue raising vehicles and secondarily to address public good issues such as technology transfer.

According to Nelsen (1991, p. 39), “The University was the birthplace of the biotechnology industry, and it continues to be the source of most of the basic new technology that fuels the industry.” He argues that university–industry research relationships (UIRRs) are the “lifeblood” of the biotechnology industry because university biological research is by its nature basic and embryonic (Nelsen, 1991, p. 39). To secure access to the intellectual property associated with new discoveries and technologies, private biotechnology firms seek to develop and strengthen their relationships with universities. Such relationships have been important for agri-biotechnology applications since much of the research and technology transfer that has yielded transgenic crops has come from industry relationships with U.S. public land-grant universities (Busch et al., 1991 and Charles, 2001). Rudy et al. (2007) argue that the historical development of land-grant universities has been driven by two sometimes competing missions. One, a populist mission, is to serve the public good through the production and dissemination of scientific and technical knowledge that is widely available and useful to a broad range of rural residents and entrepreneurs. The other is to enhance the productivity of agriculture through the development and transfer of technologies and dissemination of scientific farming techniques. When these two missions have conflicted, administrators have had to negotiate and compromise on their institution's commitment to one or both (Rudy et al., 2007). The relationship between land grants and the agri-biotechnology industry, combined with legislative and policy changes that promote a more market-oriented research and development policy environment, has highlighted the tension between these two missions. The most prominent agricultural example of this tension may be the controversy surrounding the now defunct UC Berkeley-Novartis agri-biotechnology research agreement (see Busch et al., 2004, Kirp and Popp-Berman, 2003 and Rudy et al., 2007). Three interrelated developments lie at the center of the debates concerning the appropriate links between land-grant universities and private firms and their effects on the university's societal role: (1) a series of legislation (beginning with the Bayh-Dole Act of 1980), executive orders and court decisions served to facilitate patenting of federally funded research and drove increases in the number of universities actively engaged in patenting and licensing technologies and discoveries (Mowery et al., 2004); (2) the decrease in state and federal support for agricultural research relative to private sector investment (Caswell and Day-Rubenstein, 2006); and (3) the increasing emphasis on university biotechnology research as an engine of innovation that promises to lead to economic growth through the commercialization of new technologies (Slaughter and Leslie, 1997, Mowery et al., 2004, Rudy et al., 2007 and Shane, 2004). In fact, many of the scholars investigating the emergence and expansion of the biotechnology industry view these three developments as interconnected with economic cycles. These scholars view the biotechnology industry as a response to the realization of the limits of nationalist-centered, mass-production development projects that were dominant in the second half of the twentieth century (McMichael, 2000). As the ability to realize sustained economic growth and profits through such approaches peaked in the late 1960s and early 1970s, the new technologies that comprised the “information economy” provided the opportunity for companies to add value to the production process (Kloppenburg, 2004 and Kenney, 1986). They also facilitated a shift away from nationalist-centered development strategies toward a more global division of labor by increasing the mobility of capital and firms (McMichael, 2000). These developments in turn put pressure on the fiscal situation of national and sub-national governments, making it more difficult to raise funds for financing public investments in such things as agricultural research (Slaughter and Leslie, 1997). In general prior to the 1980s, it was widely perceived that efforts to initiate biotechnology developments in the United States had been hindered by the fact that the labor and expertise that were to spur the commercial biology phenomenon had been located in U.S. research universities, which had, for the most part, been sheltered from labor and commercial market forces (Slaughter and Leslie, 1997, Kenney, 1986 and Sampat, 2006). In the case of agri-biotechnologies, a second obstacle to developing commercial applications emerged as public funding for research universities declined (Buttel et al., 1984, Kleinman and Vallas, 2001 and Caswell and Day-Rubenstein, 2006). A strategy for overcoming these obstacles has been to structure research performed at U.S. universities to be more readily utilized by U.S. firms (Buttel et al., 1984 and Mowery et al., 2004). Through legislative changes such as the 1980 Bayh-Dole Act and the 1986 Federal Technology Transfer Act that promoted university–industry collaborations, and through funding from the federal and state governments and direct investments from biotechnology firms, research universities became the primary source of new biotechnology techniques and products (Busch et al., 1991). Described as the emergence of “academic entrepreneurship” and “academic capitalism,” universities have created and expanded technology transfer and university–industry relation offices to promote collaborations and the marketing of research discoveries, created or revised policies to enable university professors to form start-up companies, and generally pursued a shift in emphasis to producing research for commercial applications (Slaughter and Leslie, 1997 and Shane, 2004). These changes have led to a burgeoning literature (descriptive, promotional and critical) that analyzes and assesses their impact on the functioning of the university and the net benefits to society. In this paper we take a brief historical look at the linkages between universities and industry and the proprietary activity of universities, and then review the descriptive, promotional and critical literatures of the impacts on the university and society from the university's shift toward a more proprietary orientation. After this we provide the outline of a framework for assessing the outcomes linked to academic entrepreneurialism based on our observation that it is often the beneficial aspects of university–industry relations that can also be the most problematic, and vice versa. We support this paradoxical assertion through the use of interview data collected from 84 agricultural scientists with industry connections at nine universities (the majority of the interviews come from six major land-grant universities). We conclude by making the case that university-level policies, especially university IP policies, are critical vehicles for managing the relationships between industry and universities in order to enhance the long-term economic and social welfare of universities, their scientists, and private sector firms.

From interviews with 84 biological scientists at nine universities we find scientists view UIRRs and university IP policies in complex and often conflicting ways. For example, university scientists believe UIRRs are valuable for increasing contact with scientists, but are problematic because working with industry can restrict communication among scientists. Also scientists believe university IP policies should shield their work from opportunistic behavior and at the same time be designed to attract industry partners. In addition scientists believe universities use their IP policies primarily as revenue raising vehicles and secondarily to address public good issues such as technology transfer. Therefore, attempting to untangle the effects of enhanced university–industry relationships and increased proprietary behavior on the part of universities is complicated. The characteristics of UIRRs that make them attractive are also a cause for concern. Contacts with industry can benefit university science through boosts in funding and access to useful data, equipment and facilities. At the same time, this funding and access has limited communication and increased conflicts of interest among university scientists. Likewise, university IP policies are extremely critical vehicles for the protection and durability of scientist academic freedom and technology development, but are also vehicles that can lead universities to value revenue gains over other more public goods oriented outcomes. Therefore, the increasing number and intensity of university–industry partnerships and the emergence of academic capitalism bring with them the paradox of opportunities and problems. In addition, the different scientific behavioral outcomes catalogued and analyzed by Owen-Smith and Powell (2001) under the academic capitalism rubric illustrate that the effects of these changes in policies and practices is not easily predicted. However, as we increase our understanding of the actors involved and the potential outcomes, it might be possible to craft policy that selects for the outcomes the public deems most attractive. For instance, academic capitalism and UIRRs might prove more useful if policies are put in place to promote the “reluctant entrepreneur” scientist. If successful, universities might embrace reluctantly the shift toward academic capitalism, and use the tools that are associated with it to enhance their more traditional mission of producing public goods. As Rudy et al. (2007) have pointed out land-grant universities have, since their inception, grappled with tensions between promoting public goods, and facilitating private accumulation. The public policy changes that have promoted UIRRs and the commercialization of university research are only the latest, but arguably the most far-reaching, iteration in this relationship. The tension lies in the fact that public-interest science is only valuable as a generator of economic development if it maintains a degree of autonomy from industrial interests (Glenna et al., 2007a, Glenna et al., 2007b and Swedberg, 1998). Our research findings indicate that university scientists believe university–industry partnerships are valuable in many ways. However, they also recognize that the positive outcomes are most likely when strong conflict of interest policies are enforced, and when university IP policies are constructed deliberately to establish clear university ownership over important discoveries. They also tend to recognize that the university should de-emphasize the revenue stream to be generated from ownership of a discovery if it is to maintain its reputation as a reliable source of information for both private firms and the general public. Rather, the focus should be on making the discovery available for commercialization and protecting the ability of university scientists to continue to refine and enhance their knowledge of the discovery, as well as understanding the functions and impacts of potential products derived from it. How universities navigate this terrain is important to their success, but also to the economic growth and development in general within the new knowledge economy. In fact David (1994, p. 66) argues that university science is to the 21st Century knowledge economy what the machine tool sector was to the economies of the 19th and early 20th centuries. Maximizing the public benefits of this transformation will require intelligent and creative policies to enhance university interactions with private sector firms while protecting the autonomy and freedom of operation of university scientists. Constructing effective policies at the university level is fundamental for realizing beneficial aspects of UIRRs and for avoiding problems. At the same time, however, developing policies on critical aspects of university operations such as IP protection is inherently complex