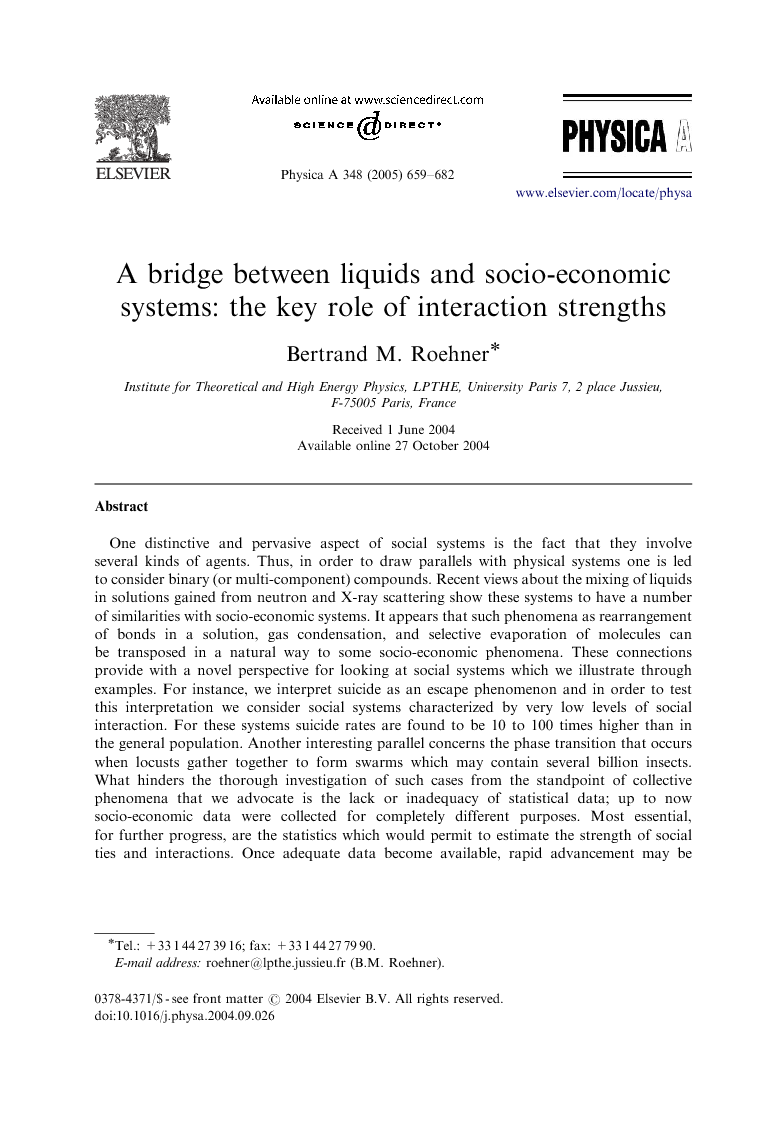 One distinctive and pervasive aspect of social systems is the fact that they involve several kinds of agents. Thus, in order to draw parallels with physical systems one is led to consider binary (or multi-component) compounds. Recent views about the mixing of liquids in solutions gained from neutron and X-ray scattering show these systems to have a number of similarities with socio-economic systems. It appears that such phenomena as rearrangement of bonds in a solution, gas condensation, and selective evaporation of molecules can be transposed in a natural way to some socio-economic phenomena. These connections provide with a novel perspective for looking at social systems which we illustrate through examples. For instance, we interpret suicide as an escape phenomenon and in order to test this interpretation we consider social systems characterized by very low levels of social interaction. For these systems suicide rates are found to be 10 to 100 times higher than in the general population. Another interesting parallel concerns the phase transition that occurs when locusts gather together to form swarms which may contain several billion insects. What hinders the thorough investigation of such cases from the standpoint of collective phenomena that we advocate is the lack or inadequacy of statistical data; up to now socio-economic data were collected for completely different purposes. Most essential, for further progress, are the statistics which would permit to estimate the strength of social ties and interactions. Once adequate data become available, rapid advancement may be expected. At the end of the paper, we will discuss whether or not the ergodic principle applies to social systems.

Over the past decade econophysics and sociophysics have been developed by theoretical physicists mainly coming from statistical physics. Recent research in econophysics is comprised of a large body of empirical inquiries on topics which so far had been largely ignored by economists or sociologists. In addition, a number of theoretical tools developed in polymer physics, spin glass studies, Ising model simulations or discrete scaling were tentatively applied to problems in economics and sociology. This paper develops the idea that there is a connection between some of the phenomena studied in statistical physics and processes which occur in human societies. If persuasive, this argument would strongly support the claim (which is at the root of econophysics) made by physicists that the insight they have gained in studying physical systems can indeed be of value in the social sciences as well. Apart from this broad contention, our investigation will also tell us which phenomena are most likely to provide a good starting point for studying social systems in a fruitful way. In the course of this paper we will see that it is the liquid state which seems to provide the best bridge to social systems. This is easy to understand intuitively. Crystallized solids have a structure whose regularity and symmetries have no match in social systems. On the other hand, gases are characterized by a complete lack of structure which is at variance with the existence of social networks. With their non-trivial and adaptive intermolecular interactions, liquids and more specifically solutions offer a better analog to socio-economic systems. Glasses, that is to say solids without crystal structure, could also be possible candidates but in the present paper we restrict our attention to solutions. Subsequently we give other, more technical, arguments in favor of a parallel between solutions and social systems. Unfortunately, the liquid state is probably the less understood. It has been suspected for a long time (see for instance Moelwyn-Hughes, 1961) that the departure from ideal (or even regular) solution behavior is due to the formation of complex molecular assemblages even for non-ionic solutions. This was the central assumption on which Dolezalek's theory was based; however, it is only in recent decades that neutron and X-ray scattering as well as infrared spectroscopy provided a more accurate picture of such molecular clusters. The new picture which progressively emerged from these studies gave us an insight into microscopic mechanisms at molecular level. It is at this level that the parallel with social systems becomes natural. That is why, throughout this paper, we try to stick to molecular mechanisms and refrain from using such concepts as entropy, energy or temperature which become meaningful only at macroscopic level. So far, these concepts have no clear equivalent in social systems. At molecular level the only notions which make sense are those of distance and molecular attraction, stretching and vibrations, molecular assemblage, and so on. In the first part of this paper I describe some physical phenomena involving liquids in terms which can be easily transposed to social systems; in the second, I invite the reader to take the plunge and outline some social parallels. The paper proceeds as follows. In Section 2, I recall that the key variable which accounts for a whole range of phenomena as diverse as boiling temperature, vapor pressure, surface tension, or viscosity is the strength of the intermolecular interaction. This is particularly true in the liquid state. This observation is a strong incentive to develop methods for measuring the strength of social ties. Then I explain why viewing the mixing of two liquids merely as an irreversible operation, which increases disorder prevents us from seeing the major role played by amalgamating and combining, two mechanisms which play a key role in biological as well as social phenomena. In Section 4, I consider the phenomenon of suicide in situations where one has a good reason to expect a low level of social interaction and accordingly high suicide rates. Then I devote a few words to social or biological situations which are similar to gas condensation or solvation. Needless to say, each of these phenomena would deserve a more detailed study. Our objective in this paper is to draw a possible agenda for future research rather than to offer detailed case studies. Part I. Physical background Studying social phenomena is often frustrating because for each law or regularity that one tentatively tries to propose there are usually many exceptions and outliers. The situation is fairly similar in physical chemistry. No model has a broad validity and exceptions abound even for the most basic effects. In this sense physical chemists are certainly better prepared to cope with social systems than for instance particle physicists or solid state physicists. The background presentation in the first part is entirely based on experimental evidence. The discussions I have had with colleagues in my lab convinced me that even experienced theoretical physicists may not necessarily be familiar with these facts and their interpretations. However, this first part may be safely skipped by physical chemists. The next section about interaction strength offers a pedestrian, and a fairly self-contained approach. In the section about the structure of liquids we limit ourselves to giving a number of important references about salient features.1