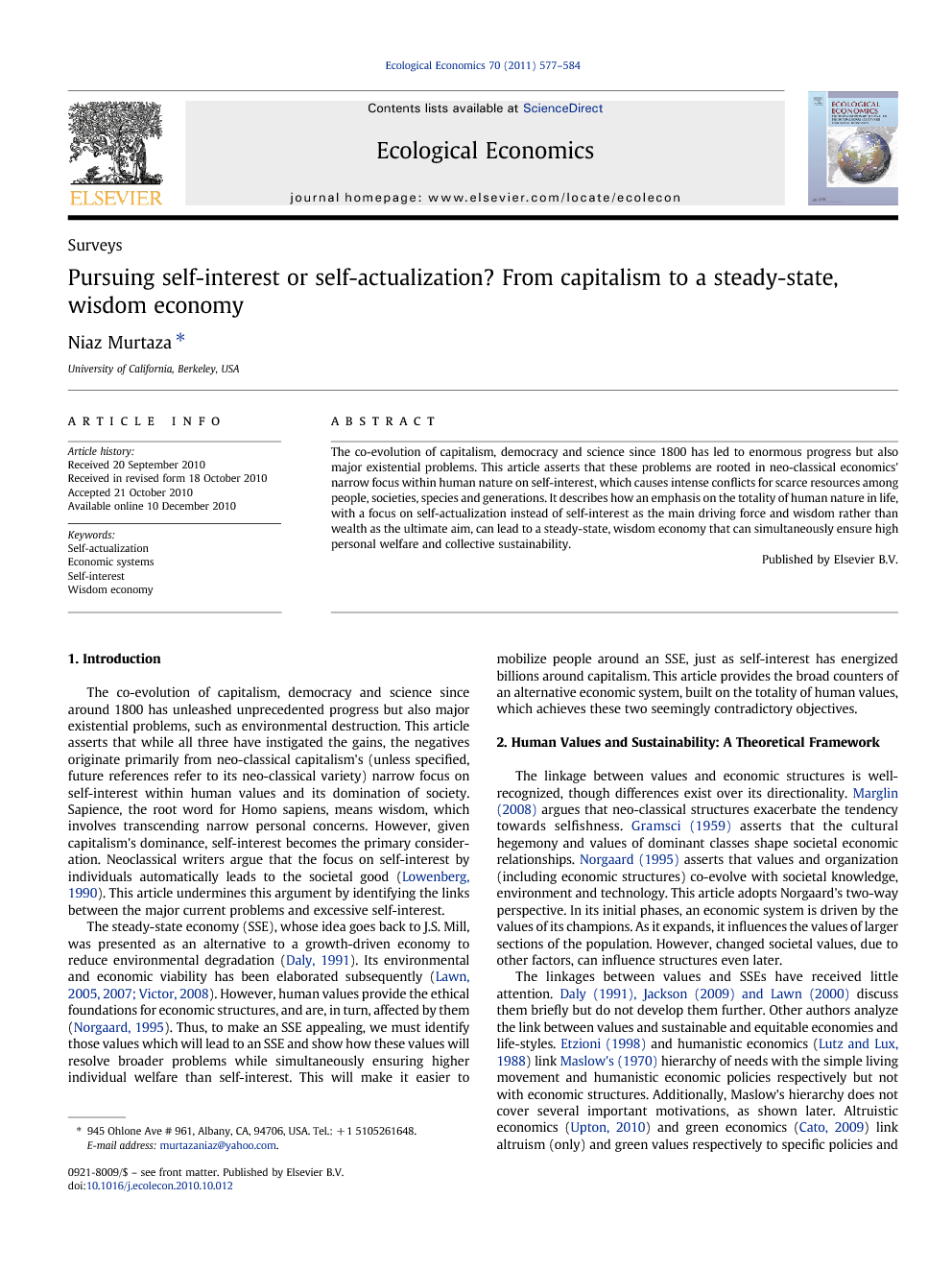 The co-evolution of capitalism, democracy and science since 1800 has led to enormous progress but also major existential problems. This article asserts that these problems are rooted in neo-classical economics' narrow focus within human nature on self-interest, which causes intense conflicts for scarce resources among people, societies, species and generations. It describes how an emphasis on the totality of human nature in life, with a focus on self-actualization instead of self-interest as the main driving force and wisdom rather than wealth as the ultimate aim, can lead to a steady-state, wisdom economy that can simultaneously ensure high personal welfare and collective sustainability.

The co-evolution of capitalism, democracy and science since around 1800 has unleashed unprecedented progress but also major existential problems, such as environmental destruction. This article asserts that while all three have instigated the gains, the negatives originate primarily from neo-classical capitalism's (unless specified, future references refer to its neo-classical variety) narrow focus on self-interest within human values and its domination of society. Sapience, the root word for Homo sapiens, means wisdom, which involves transcending narrow personal concerns. However, given capitalism's dominance, self-interest becomes the primary consideration. Neoclassical writers argue that the focus on self-interest by individuals automatically leads to the societal good (Lowenberg, 1990). This article undermines this argument by identifying the links between the major current problems and excessive self-interest. The steady-state economy (SSE), whose idea goes back to J.S. Mill, was presented as an alternative to a growth-driven economy to reduce environmental degradation (Daly, 1991). Its environmental and economic viability has been elaborated subsequently (Lawn, 2005, Lawn, 2007 and Victor, 2008). However, human values provide the ethical foundations for economic structures, and are, in turn, affected by them (Norgaard, 1995). Thus, to make an SSE appealing, we must identify those values which will lead to an SSE and show how these values will resolve broader problems while simultaneously ensuring higher individual welfare than self-interest. This will make it easier to mobilize people around an SSE, just as self-interest has energized billions around capitalism. This article provides the broad counters of an alternative economic system, built on the totality of human values, which achieves these two seemingly contradictory objectives.

Human beings are endowed with high intelligence. Unfortunately, nature does not have the ecological capacity to satisfy the excessive focus on self-interest by a highly intelligent species. However, it has included a broad range of motivations in the Homo sapiens genome to provide ample avenues for utilizing this high intelligence. Under capitalism, this intelligence has focused excessively on self-interest, causing enormous progress but also huge existential problems. Using the enormous human intellect in the pursuit of self-interest mainly causes conflicts with others as well as a wasted life as we lose the chance to attain our full potential in the form of wisdom. Several alternatives to capitalism have emerged over time. However, they failed to replace capitalism by not basing their structures on the foundations of clear and appealing values. They represented buildings without foundations that could not sustain. Capitalism based its structures on values that appealed to people given the widespread poverty then, but it also inflicted enormous costs. Thus, we need a system based on the highest reaches of human nature. Social scientists from different disciplines over time have developed various pieces of the jig-saw puzzle representing a wisdom-based alternative. However, academic specialization means the pieces are scattered widely. This article addresses this problem by drawing upon ideas from different disciplines to present a system whose main strength is its base in appealing values which simultaneously help ensure individual welfare and resolve major existential problems. Its basic message is that the win–win potential of self-interest is illusory. However, there is an alternative: if everybody pursues self-actualization, this will lead to the individual and societal good. Homo sapiens will then justify their species name and make Homo economicus extinct.