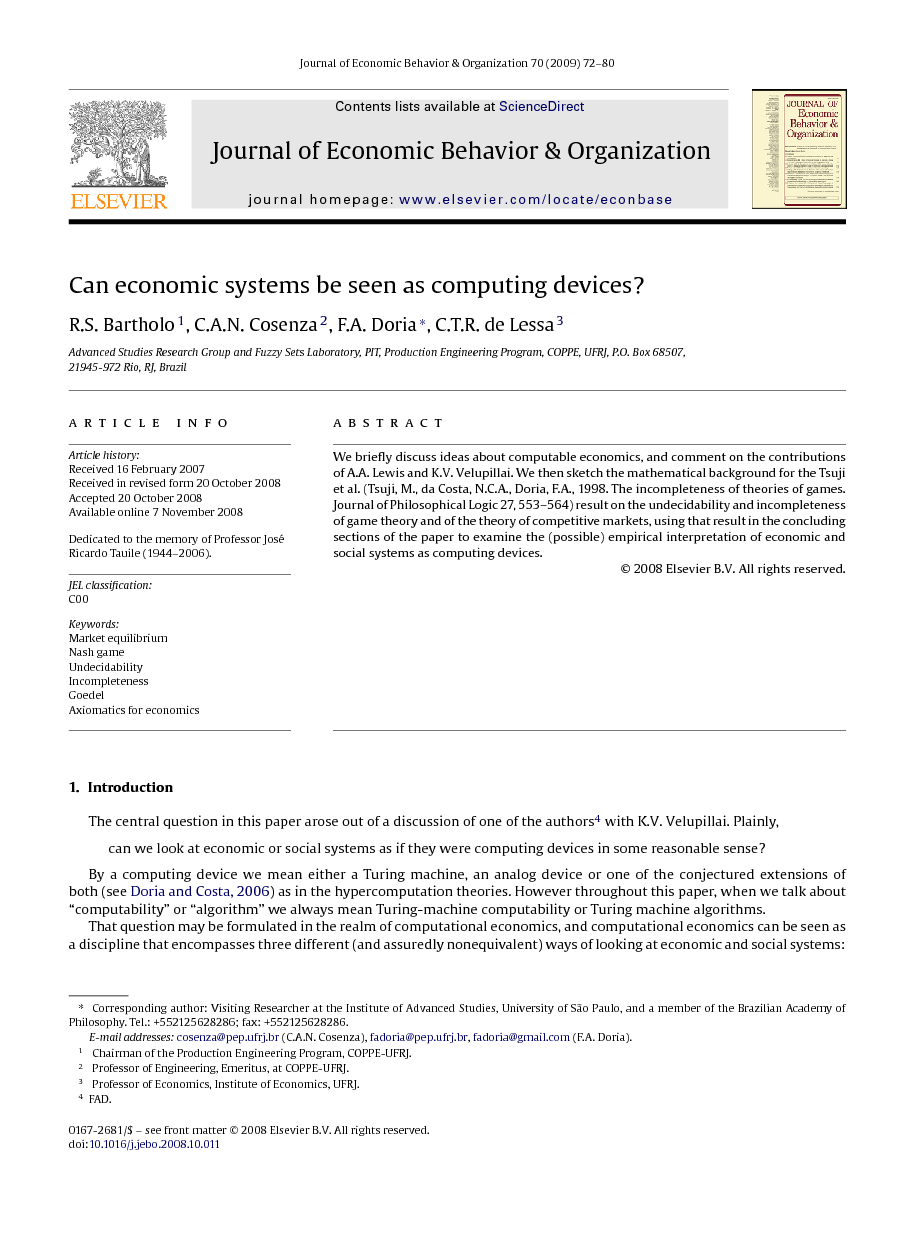 We briefly discuss ideas about computable economics, and comment on the contributions of A.A. Lewis and K.V. Velupillai. We then sketch the mathematical background for the Tsuji et al. (Tsuji, M., da Costa, N.C.A., Doria, F.A., 1998. The incompleteness of theories of games. Journal of Philosophical Logic 27, 553–564) result on the undecidability and incompleteness of game theory and of the theory of competitive markets, using that result in the concluding sections of the paper to examine the (possible) empirical interpretation of economic and social systems as computing devices.

The central question in this paper arose out of a discussion of one of the authors4 with K.V. Velupillai. Plainly, can we look at economic or social systems as if they were computing devices in some reasonable sense? By a computing device we mean either a Turing machine, an analog device or one of the conjectured extensions of both (see Doria and Costa, 2006) as in the hypercomputation theories. However throughout this paper, when we talk about “computability” or “algorithm” we always mean Turing-machine computability or Turing machine algorithms. That question may be formulated in the realm of computational economics, and computational economics can be seen as a discipline that encompasses three different (and assuredly nonequivalent) ways of looking at economic and social systems: • Can we computationally5 predict the behavior of some (economic, social) phenomenon X? Can we compute quantitative data about X? • Can we formulate in a constructive way the main results from mathematical economics? • Finally, can we look at economic (and social) processes as computing devices? We will deal in this paper with the last question above, which we stress: Can we look at economic and social processes as some sort of computing devices? If we restrict our search about the subject to the last 30 years, we see that several of the main contributions to the area have been made by A.A. Lewis and K.V. Velupillai. Our interest in their work has to do with the emphasis they place on the metamathematical phenomena that bear on mathematical economics; this should help to clarify our main question.6 1.1. Goals of this paper We use the Tsuji et al. (1998) incompleteness theorem for game theory in the light of the results by Lewis and Velupillai in order to try to understand whether it makes sense to interprete actual economic systems and processes as computing devices. As an aside, we discuss the Tsuji et al. result and explain its meaning for a wider audience in the economics community. The central point we wish to stress, a point which is very clear from the work of Lewis and Velupillai, is: once you build your argument within a framework that includes enough arithmetic to develop recursive function theory in it, then you get Gödel incompleteness everywhere, that is, you get undecidable sentences of all sorts, including those that deal with interesting or pressing theoretical questions. For a detailed presentation of the main concepts we require here from computer science see Machtey and Young (1979) and Rogers (1967). For a summary of the main ideas directed to the economics community see Velupillai (2000).