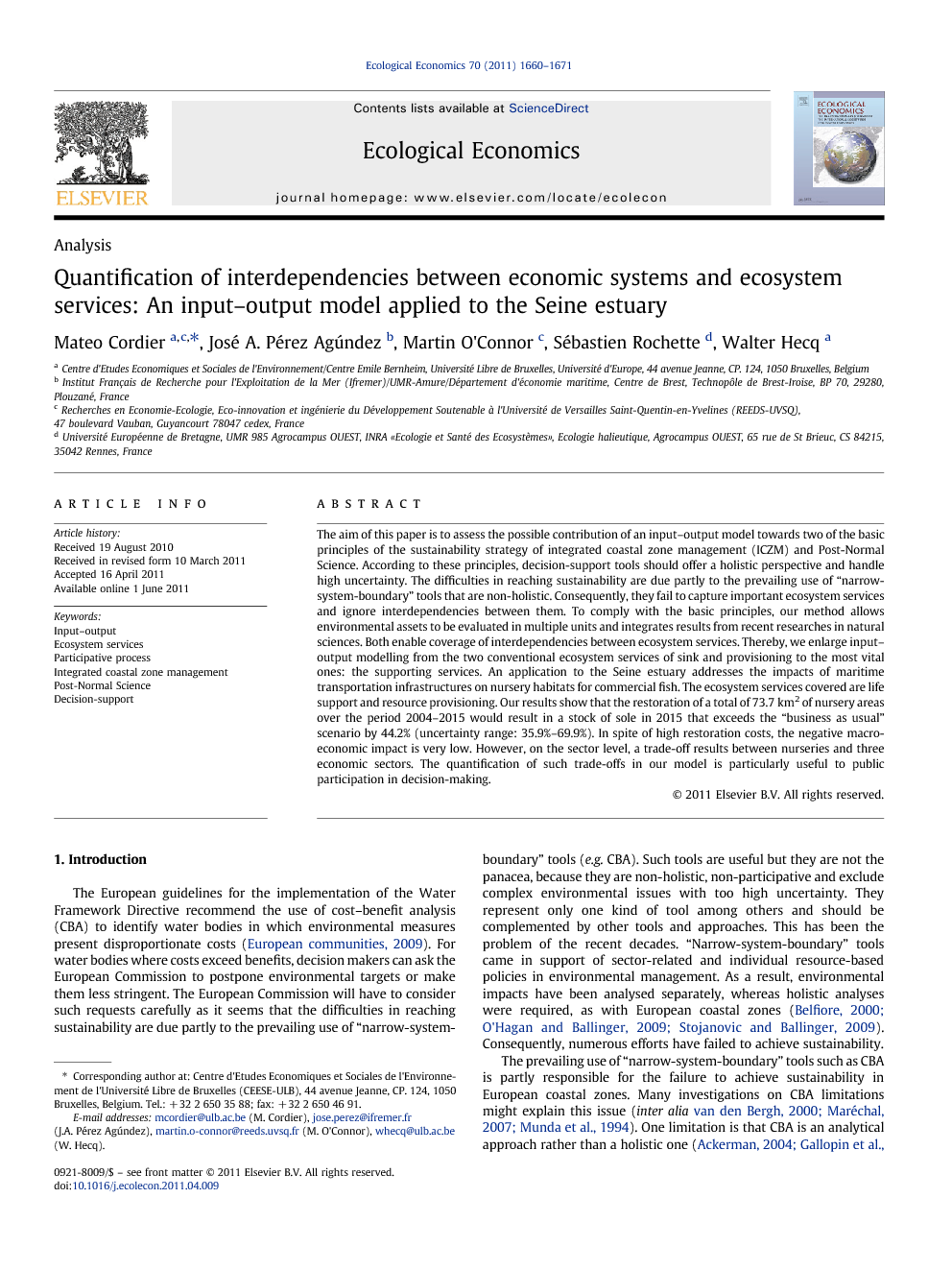 The aim of this paper is to assess the possible contribution of an input–output model towards two of the basic principles of the sustainability strategy of integrated coastal zone management (ICZM) and Post-Normal Science. According to these principles, decision-support tools should offer a holistic perspective and handle high uncertainty. The difficulties in reaching sustainability are due partly to the prevailing use of “narrow-system-boundary” tools that are non-holistic. Consequently, they fail to capture important ecosystem services and ignore interdependencies between them. To comply with the basic principles, our method allows environmental assets to be evaluated in multiple units and integrates results from recent researches in natural sciences. Both enable coverage of interdependencies between ecosystem services. Thereby, we enlarge input–output modelling from the two conventional ecosystem services of sink and provisioning to the most vital ones: the supporting services. An application to the Seine estuary addresses the impacts of maritime transportation infrastructures on nursery habitats for commercial fish. The ecosystem services covered are life support and resource provisioning. Our results show that the restoration of a total of 73.7 km2 of nursery areas over the period 2004–2015 would result in a stock of sole in 2015 that exceeds the “business as usual” scenario by 44.2% (uncertainty range: 35.9%–69.9%). In spite of high restoration costs, the negative macro-economic impact is very low. However, on the sector level, a trade-off results between nurseries and three economic sectors. The quantification of such trade-offs in our model is particularly useful to public participation in decision-making.

In this paper, we develop an ecological–economic I–O model to estimate the impacts of the restoration of half of the fish nurseries with high juvenile densities (73.7 km2) that have been largely destroyed between 1834 and 2004. Our results show that such a measure, applied on the basis of the precautionary principle advocated in the Marine Strategy Framework Directive (European Parliament and Council, 2008), can be implemented in the Seine estuary with only a slight decrease in macro-economic indicators compared to a situation without restoration (BAU scenario). The amount of sole biomass generated by the restoration exceeds the BAU scenario by 44.2%, while the GDP, the total gross operating surplus, the total compensation of employees, and the total employment are all below the BAU by 0.2%. However, these results must be considered as partial. If all costs of nursery restoration were included in the model, a part of ecosystem services could not be assessed because appropriate data and knowledge do not exist yet. Only two ecosystem services are evaluated by the model. The first is life support for juvenile sole, an overfished species whose population is at risk in the Eastern channel (ICES, 2008). The second is the provisioning service of sole for human consumption, which is an important service provided to the economy, given the high commercial value of sole. If, without considering all the benefits from ecosystem services, our results show little negative macro-economic impact, extending the assessment to the five other ecosystem services mentioned in Section 6.2 would probably demonstrate that nursery restoration has positive macro-economic impacts. The model is operational and ready for extension to these other services as soon as appropriate data becomes available. The results also show that a vast nursery restoration programme generates significant economic impacts on the sector level rather than on the macro-economic one. This suggests that the restoration costs can be seen more as a problem of cost allocation than as a problem per se. In this perspective, the model helps to identify the sectors which would be the most vulnerable if the “Polluter Pays Principle” were applied, such as recommended in the Marine Strategy Framework Directive. This concerns harbours, the mining sector and the sector of coke manufacturing, refined petroleum products and nuclear fuels (Section 6.3). Identifying vulnerable sectors might help decision makers to adapt this principle and change the cost allocation rules, if they want to avoid a complete collapse of some economic sectors. For instance, indirect polluters such as the tertiary sector and final consumers (households) could participate in restoration costs, since both benefit from commodities transported on water. Moreover, this paper shows possibilities to improve the holistic properties of I–O modelling, one of the two basic principles of Post-Normal Science and ICZM that is tested in this paper. This is achieved by extending the amount of categories of ecosystem services considered. Usually, I–O analyses only address the problem of sink (accumulation of pollutants emitted into the ecosystem) and provisioning services (provision of natural resources for human consumption). In this paper, we extend I–O modelling to supporting services (estuarine nurseries as a habitat for fish juveniles). Such extension is very important because supporting services are the most vital category of ecosystem services, since all other ecosystem services depend on them (de Groot et al., 2002 and Millennium Ecosystem Assessment, 2005). Besides extending the number of ecosystem service categories, holistic properties are also ensured by the use of multiple indicators and units in our I–O model. This fulfils the recommendation from Post-Normal Science advocating the use of a diverse panel of indicators to capture the complexity of ecosystems and ensure holistic properties (Giampietro et al., 2006). Along with the use of recent developments in biology and hydro-sedimentology, this makes it possible to consider interdependencies between ecosystem services in I–O modelling, as recommended by Carpentier (1994) (Section 3.1). This also encounters the definition of “holistic” from Gallopin et al. (2001) (Section 1). If the advantage of holistic properties is a better understanding of the inherent complexity of ecosystems and to enlarge the amount of ecosystem service categories considered, the disadvantage is that great uncertainty is introduced into scientific analyses (Section 3.1). As recommended by Post-Normal Science and ICZM, this uncertainty should be managed. To fulfil this recommendation, we apply the following strategy. Part of the uncertainty – the degree of precision – is handled through a sensitive analysis showing the range of values within which our results may vary, due to the relative indeterminacy on the model parameters (Section 6). This concerns the short to medium term uncertainty as to the capacity of estuarine nurseries to shelter sole juveniles (depending on sediment and water contamination — sink service), the nursery surface area that will remain (life support service), and the marine fish stock in the Eastern channel for human consumption (provisioning service). Another part of uncertainty – the degree of accuracy – is handled through the validation of the economic results given by the model based on economic data observed in the past. The discrepancy between observed data and the results given by the model is used as a measure of the uncertainty due to the architecture of the model. Another part of the uncertainty cannot be analysed through sensitivity analysis because it relates to parameters and variables that could not be inserted into the model. This problem concerns the five ecosystem services mentioned in Section 6.2 for which appropriate data do not yet exist. As a result, uncertainty remains on the interdependencies between these five ecosystem services and the economic system. Until data and knowledge are produced, this is typically the kind of issue for which final decision relies more on individual judgment and common sense than on scientific evidence. This shows the need for transparent inclusion of divergent public perspectives and value judgment in decision-making processes via stakeholder participation techniques (Giampietro et al., 2006 and Stirling, 2006).