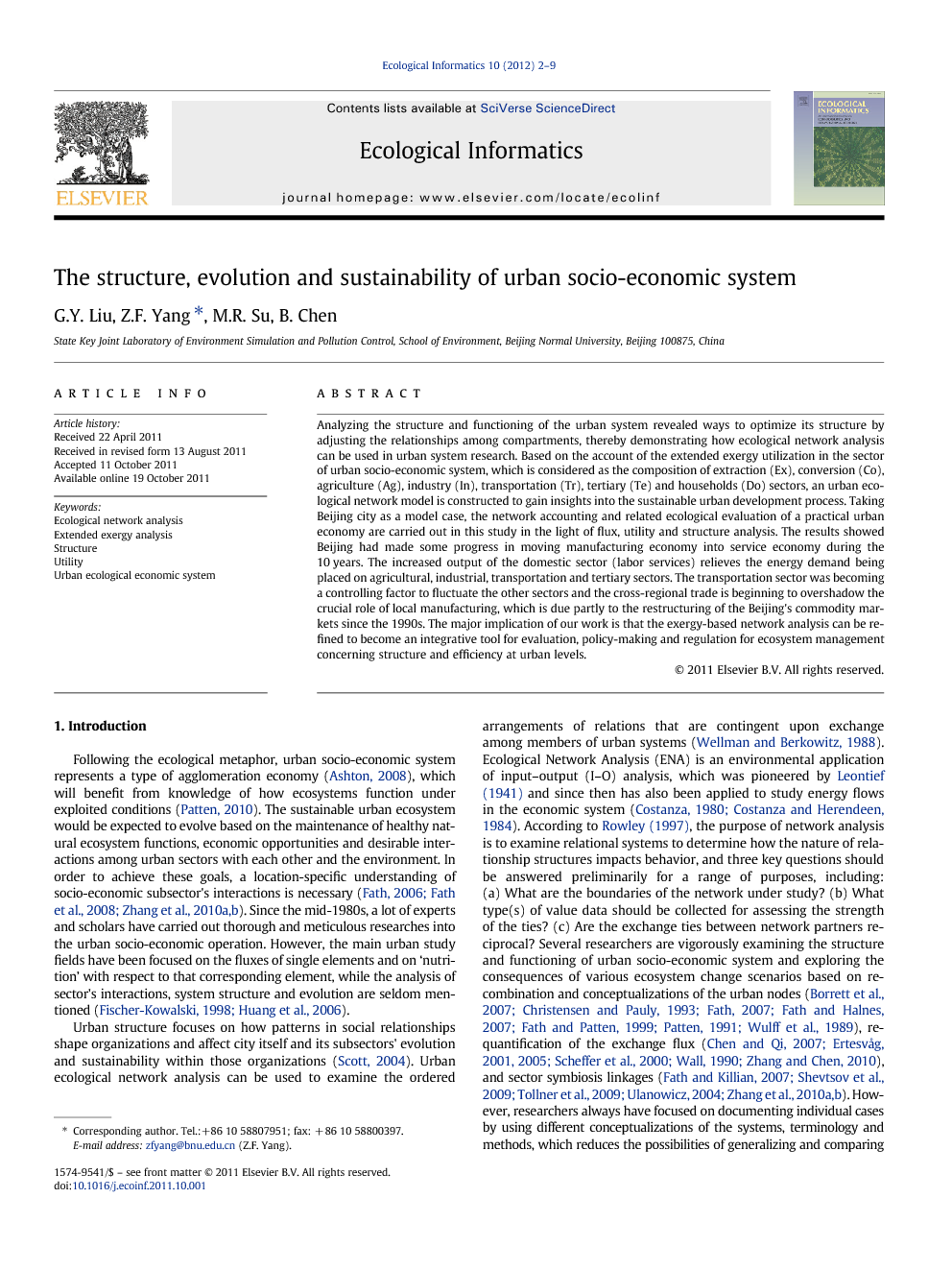 Analyzing the structure and functioning of the urban system revealed ways to optimize its structure by adjusting the relationships among compartments, thereby demonstrating how ecological network analysis can be used in urban system research. Based on the account of the extended exergy utilization in the sector of urban socio-economic system, which is considered as the composition of extraction (Ex), conversion (Co), agriculture (Ag), industry (In), transportation (Tr), tertiary (Te) and households (Do) sectors, an urban ecological network model is constructed to gain insights into the sustainable urban development process. Taking Beijing city as a model case, the network accounting and related ecological evaluation of a practical urban economy are carried out in this study in the light of flux, utility and structure analysis. The results showed Beijing had made some progress in moving manufacturing economy into service economy during the 10 years. The increased output of the domestic sector (labor services) relieves the energy demand being placed on agricultural, industrial, transportation and tertiary sectors. The transportation sector was becoming a controlling factor to fluctuate the other sectors and the cross-regional trade is beginning to overshadow the crucial role of local manufacturing, which is due partly to the restructuring of the Beijing's commodity markets since the 1990s. The major implication of our work is that the exergy-based network analysis can be refined to become an integrative tool for evaluation, policy-making and regulation for ecosystem management concerning structure and efficiency at urban levels.

Following the ecological metaphor, urban socio-economic system represents a type of agglomeration economy (Ashton, 2008), which will benefit from knowledge of how ecosystems function under exploited conditions (Patten, 2010). The sustainable urban ecosystem would be expected to evolve based on the maintenance of healthy natural ecosystem functions, economic opportunities and desirable interactions among urban sectors with each other and the environment. In order to achieve these goals, a location-specific understanding of socio-economic subsector's interactions is necessary (Fath and Borrett, 2006, Fath et al., 2008, Zhang et al., 2010a and Zhang et al., 2010b). Since the mid-1980s, a lot of experts and scholars have carried out thorough and meticulous researches into the urban socio-economic operation. However, the main urban study fields have been focused on the fluxes of single elements and on ‘nutrition’ with respect to that corresponding element, while the analysis of sector's interactions, system structure and evolution are seldom mentioned (Fischer-Kowalski, 1998 and Huang et al., 2006). Urban structure focuses on how patterns in social relationships shape organizations and affect city itself and its subsectors' evolution and sustainability within those organizations (Scott, 2004). Urban ecological network analysis can be used to examine the ordered arrangements of relations that are contingent upon exchange among members of urban systems (Wellman and Berkowitz, 1988). Ecological Network Analysis (ENA) is an environmental application of input–output (I–O) analysis, which was pioneered by Leontief (1941) and since then has also been applied to study energy flows in the economic system (Costanza, 1980 and Costanza and Herendeen, 1984). According to Rowley (1997), the purpose of network analysis is to examine relational systems to determine how the nature of relationship structures impacts behavior, and three key questions should be answered preliminarily for a range of purposes, including: (a) What are the boundaries of the network under study? (b) What type(s) of value data should be collected for assessing the strength of the ties? (c) Are the exchange ties between network partners reciprocal? Several researchers are vigorously examining the structure and functioning of urban socio-economic system and exploring the consequences of various ecosystem change scenarios based on recombination and conceptualizations of the urban nodes (Borrett et al., 2007, Christensen and Pauly, 1993, Fath, 2007, Fath and Halnes, 2007, Fath and Patten, 1999, Patten, 1991 and Wulff et al., 1989), re-quantification of the exchange flux (Chen and Qi, 2007, Ertesvåg, 2001, Ertesvåg, 2005, Scheffer et al., 2000, Wall, 1990 and Zhang and Chen, 2010), and sector symbiosis linkages (Fath and Killian, 2007, Shevtsov et al., 2009, Tollner et al., 2009, Ulanowicz, 2004, Zhang et al., 2010a and Zhang et al., 2010b). However, researchers always have focused on documenting individual cases by using different conceptualizations of the systems, terminology and methods, which reduces the possibilities of generalizing and comparing findings across them. Preliminary work is still needed to characterize urban ecosystems systematically — their structure, functions and mechanisms through which different types of changes happen. This paper tries to address the need to characterize urban socio-economic system in a systematic way by developing a framework that integrates ecological, economic and organizational theories and methodologies that could be applied to cases of wide time scales. A single case is analyzed to illustrate how such a framework and methodologies can be applied to provide deeper insight into how regional ecosystems are structured, function and develop, and provided the implications of these attributes for system sustainability. The main questions answered through this research are: what are the organizational structures among actors at various levels in urban systems? How do these structures change over time? What is the role of sectoral relations in these organizational structures, particularly with regard to observed sectoral symbiosis linkages? As a continuation of our earlier efforts of unified analysis based on extended exergy for quantifying the flux of exchange in Beijing society (Liu et al., 2011a) and the ecological network model for the urban metabolic system (Liu et al., 2011b, Zhang et al., 2010a and Zhang et al., 2010b), the present work provides an ecological network determination of sectoral linkages, utility relations and structural characteristics on the urban ecological economic system, with emphasis on a joint application of the extended exergy synthesis and ecological network analysis methods for regional comparison.

To provide an effective avenue to evaluate the capacity of the urban socio-economic system, we incorporate the network analysis framework into this study to integrate indicators of flux, utility and structure. Based on the account of the extended exergy utilization, which is considered as the composition of extraction, conversion, agriculture, industry, transportation, tertiary and households sectors, an urban ecological network model is constructed to gain insights into the sustainable urban development process. The case of Beijing was used to demonstrate how this framework could be applied. This study is relevant for understanding the historical development of such systems. Although it is a small regional economy, economic geographical characteristics were observed during the transition of this region from a social sectoral cluster. The level of cooperation that spurred the development of the cluster arose through a symbiosis initiative, thus the “follow the materials” approach of industrial ecology provided insight, which may have been otherwise overlooked. The integrated framework enabled identification of the system's interaction and structure as well as resulting and potential problems associated with the sectors. While the case study had a unique history of development, the framework can be used to insightfully and holistically study other self-organizing urban systems.