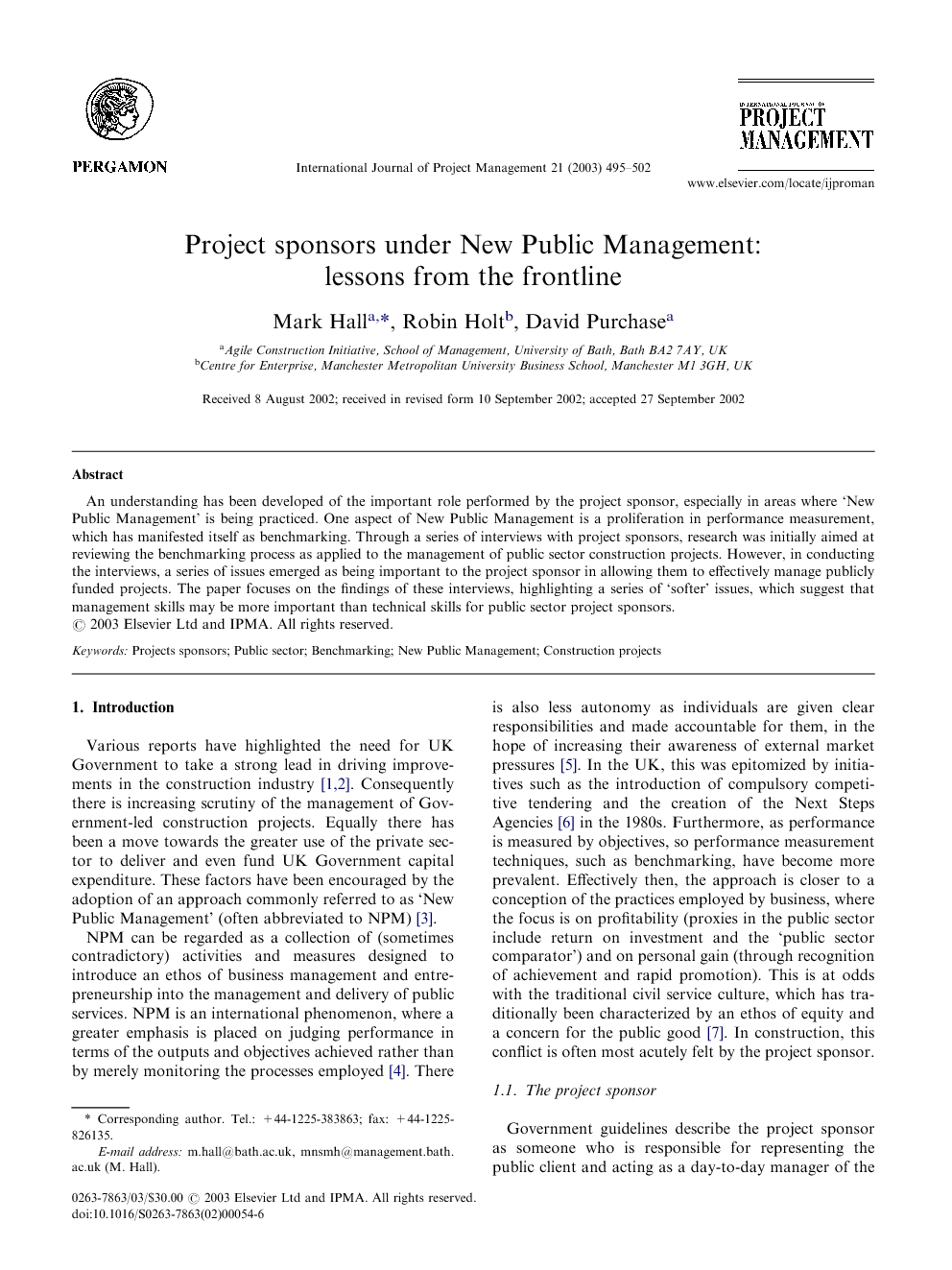 An understanding has been developed of the important role performed by the project sponsor, especially in areas where ‘New Public Management’ is being practiced. One aspect of New Public Management is a proliferation in performance measurement, which has manifested itself as benchmarking. Through a series of interviews with project sponsors, research was initially aimed at reviewing the benchmarking process as applied to the management of public sector construction projects. However, in conducting the interviews, a series of issues emerged as being important to the project sponsor in allowing them to effectively manage publicly funded projects. The paper focuses on the findings of these interviews, highlighting a series of ‘softer’ issues, which suggest that management skills may be more important than technical skills for public sector project sponsors.

Various reports have highlighted the need for UK Government to take a strong lead in driving improvements in the construction industry [1] and [2]. Consequently there is increasing scrutiny of the management of Government-led construction projects. Equally there has been a move towards the greater use of the private sector to deliver and even fund UK Government capital expenditure. These factors have been encouraged by the adoption of an approach commonly referred to as ‘New Public Management’ (often abbreviated to NPM) [3]. NPM can be regarded as a collection of (sometimes contradictory) activities and measures designed to introduce an ethos of business management and entrepreneurship into the management and delivery of public services. NPM is an international phenomenon, where a greater emphasis is placed on judging performance in terms of the outputs and objectives achieved rather than by merely monitoring the processes employed [4]. There is also less autonomy as individuals are given clear responsibilities and made accountable for them, in the hope of increasing their awareness of external market pressures [5]. In the UK, this was epitomized by initiatives such as the introduction of compulsory competitive tendering and the creation of the Next Steps Agencies [6] in the 1980s. Furthermore, as performance is measured by objectives, so performance measurement techniques, such as benchmarking, have become more prevalent. Effectively then, the approach is closer to a conception of the practices employed by business, where the focus is on profitability (proxies in the public sector include return on investment and the ‘public sector comparator’) and on personal gain (through recognition of achievement and rapid promotion). This is at odds with the traditional civil service culture, which has traditionally been characterized by an ethos of equity and a concern for the public good [7]. In construction, this conflict is often most acutely felt by the project sponsor. 1.1. The project sponsor Government guidelines describe the project sponsor as someone who is responsible for representing the public client and acting as a day-to-day manager of the client's interests within the project [8]. Under the aegis of NPM, project sponsors are increasingly expected to take a more active role in projecting the client's voice into projects for which they have been made responsible. Traditionally, the project sponsor has been responsible for financial control of projects [9]. However, with the advent of NPM and the adoption of modern procurement methods there is increasing understanding that financial aspects of projects are influenced by the good management of risk [10] and [11]. Equally, project sponsors (including all those who were interviewed for this research) are now becoming far more involved in the detailed, day-to-day control of projects on behalf of the Client [12]. The benefit of this is that it provides a 'one-stop' point of contact, which should lead to faster and more effective communications and decision making. Brereton and Temple [13] suggested that the project sponsor role required individuals to become ‘critical leaders’ within projects. They would be expected to provide technical expertise while also being able to effectively manage the softer people issues affecting projects. This suggests that the abilities of project sponsors could have a significant effect on the success, or otherwise, of major construction projects. 1.2. Extant research In the UK, a number of research initiatives aimed at understanding and improving the performance of the UK Government as a client to the construction industry have been conducted in recent years. Initially benchmarking was the primary tool used to assess performance and identify areas for improvement [2] and [14]). This highlighted the importance of the role of the project sponsor in successfully delivering the aims and objectives of construction projects. Therefore, follow up research was aimed specifically at these individuals. This research initially sought to understand the cultural imperatives required for project sponsors to perform their role successfully [15]. This research also identified the conflicts and obstacles confronting project sponsors. In dealing with these conflicts, the project sponsor is ideally placed to identify issues of concern and areas for improving management practices within construction project management. Based on these earlier findings, the current research had two primary aims. • Firstly, to review benchmarking and performance measurement activities currently in use in terms of their effectiveness in encouraging improvements. • Secondly, to exploit the knowledge and experience of project sponsors and so make recommendations for improvements to the project management process and the role of the project sponsor in public sector construction projects.

The research had, as an initial goal, to create a better understanding of the perception of benchmarking and performance measurement from the perspective of public sector project sponsors. The findings illustrated that there was broad concern for the uses to which data were put as well as for the types of data collected. This reflected the prevailing opinion that benchmarking data was used primarily to assess and vet performance rather than improve it. It was found that, in conducting the interviews themselves, interviewees became more familiar with the intent of benchmarking, and less suspicious of the motives behind its introduction. This pointed to the need to ‘humanize’ the process of data collection: to explain why data were being collected in the first instance, how they were intended to be reported, and to demonstrate possible benefits from this use. The interviews showed that, if performance measurement approaches such as project level benchmarking were to be successful, respondent commitment and interest would be crucial. One approach to effect this would be to integrate data collection and reporting mechanisms within the already existing array of project management tools and practices. As was mentioned prior to the review of the findings, in analyzing the interviews, it was found that it was difficult to consider any one theme or issue in isolation. In addressing each theme, aspects of other themes become important. This demonstrated that the project sponsor's reality was a complex one, juggling the multiple needs of stakeholders and user groups, departmental procedures and practices, pan-government edicts and a sense of public probity and equity with an industry motivated by profit. This was against a backdrop of low levels of trust and fragmentation within that industry, a legacy of adversarial contracts and an ‘us-and-them’ attitude. It was this holistic nature that became the dominant theme and, consequently, the dominant recommendation was to find ways of addressing the softer, cultural and attitudinal issues entailed by this. Other specific recommendations arising from the research included: • Auditing procedures should be amended to allow for ‘whole life costs’ rather than just the initial capital cost. A whole life cost model may need to be developed to facilitate this. • Where necessary, end-of-year budgetary systems should be amended to allow project sponsors to allocate funds sensibly to achieve best value. • More time needs to be allowed for reflection and consideration of non-technical risks within the risk management process. • Clients should consider the performance of the whole supply chain rather than just the main contractor and consultant. They should identify ‘key’ suppliers and assess their ability, especially in terms of management skills. • Partnering appears to help create ‘project focus’ among project participants. Such an approach should be introduced at an early stage (possibly pre-tender) and include second and possibly third tier suppliers. The main aim is to encourage dialogue and understanding through the project team, helping to address, for example, sponsor dissatisfaction with industry performance. • Flexibility of procurement route would allow clients to exploit the benefits of appropriate risk transfer. The emphasis has been upon the adoption of prescribed procurement routes, which could hinder the effective delivery of project aims. • The stakeholder consultation process should allow for on-going dialogue throughout the project. It should include members of the public rather than just user or pressure groups. • Project sponsors must use their influence to drive improvement in health and safety. They must be concerned for the health and safety of all project stakeholders, including contractors, and not just the safety of end users and the general public. • Consideration needs to be given to professionalising the role of the project sponsor. The position needs to be seen as a legitimate career path supported by development and training opportunities. The training should have a greater emphasis on managerial rather than technical skills. It was clear that an effective project sponsor could make a significant impact on the success or otherwise of a construction project. The key issues arising from the research reported in this paper suggest that their largest contribution is in the ‘softer’ management areas, namely to encourage dialogue and promote co-operation amongst the project team. To cope with all the different demands placed upon them, project sponsors need to develop long-term relationships and acquire significant experience of their role. Unfortunately, the current climate does not encourage this and, within the UK civil service, the position is seen as a temporary one on route to more ‘prestigious’ positions. Therefore efforts should be made to legitimize the position through professionalising its status and offering opportunities for training and personal development.