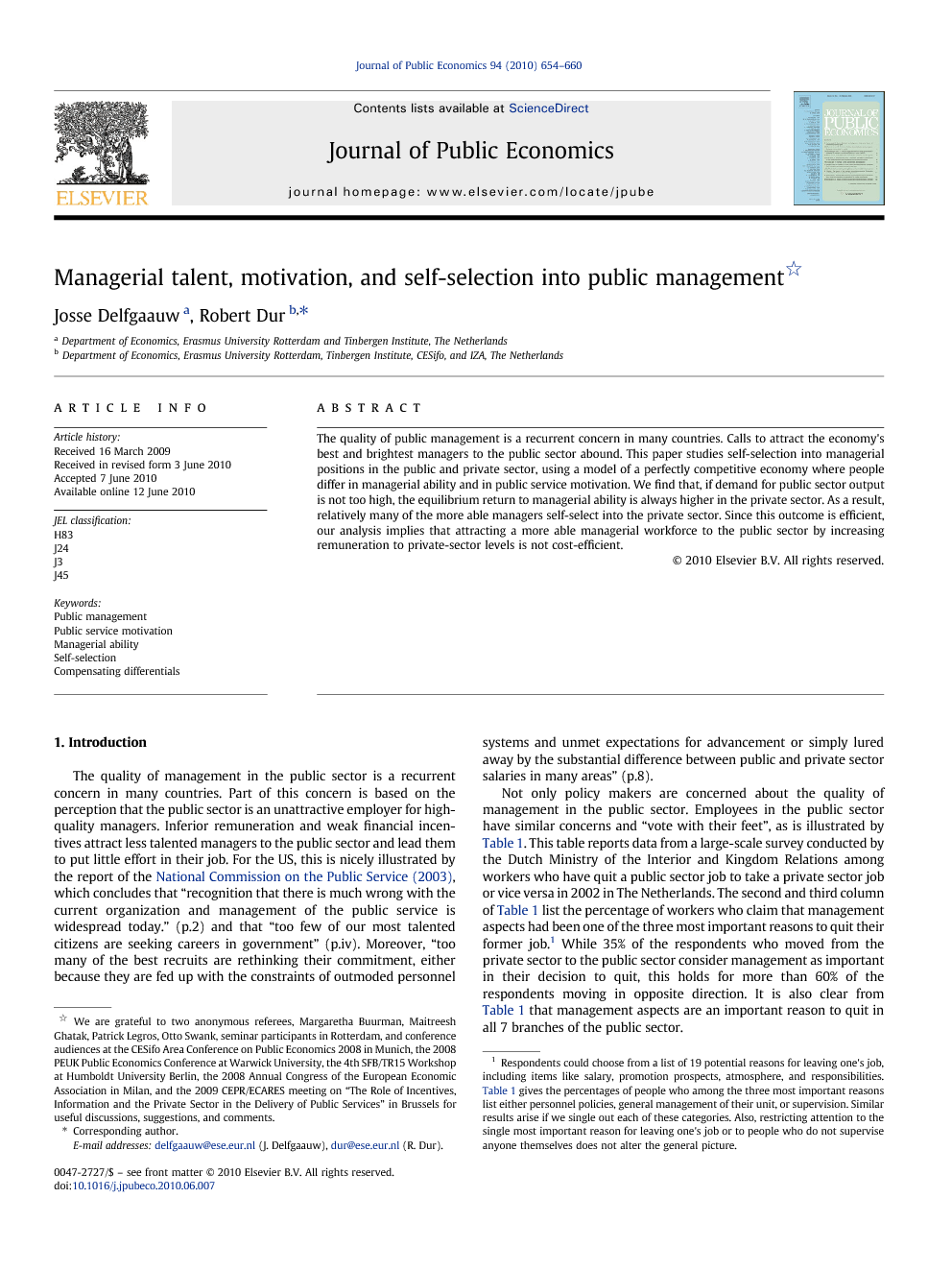 The quality of public management is a recurrent concern in many countries. Calls to attract the economy's best and brightest managers to the public sector abound. This paper studies self-selection into managerial positions in the public and private sector, using a model of a perfectly competitive economy where people differ in managerial ability and in public service motivation. We find that, if demand for public sector output is not too high, the equilibrium return to managerial ability is always higher in the private sector. As a result, relatively many of the more able managers self-select into the private sector. Since this outcome is efficient, our analysis implies that attracting a more able managerial workforce to the public sector by increasing remuneration to private-sector levels is not cost-efficient.

The quality of management in the public sector is a recurrent concern in many countries. Part of this concern is based on the perception that the public sector is an unattractive employer for high-quality managers. Inferior remuneration and weak financial incentives attract less talented managers to the public sector and lead them to put little effort in their job. For the US, this is nicely illustrated by the report of the National Commission on the Public Service (2003), which concludes that “recognition that there is much wrong with the current organization and management of the public service is widespread today.” (p.2) and that “too few of our most talented citizens are seeking careers in government” (p.iv). Moreover, “too many of the best recruits are rethinking their commitment, either because they are fed up with the constraints of outmoded personnel systems and unmet expectations for advancement or simply lured away by the substantial difference between public and private sector salaries in many areas” (p.8). Not only policy makers are concerned about the quality of management in the public sector. Employees in the public sector have similar concerns and “vote with their feet”, as is illustrated by Table 1. This table reports data from a large-scale survey conducted by the Dutch Ministry of the Interior and Kingdom Relations among workers who have quit a public sector job to take a private sector job or vice versa in 2002 in The Netherlands. The second and third column of Table 1 list the percentage of workers who claim that management aspects had been one of the three most important reasons to quit their former job.1 While 35% of the respondents who moved from the private sector to the public sector consider management as important in their decision to quit, this holds for more than 60% of the respondents moving in opposite direction. It is also clear from Table 1 that management aspects are an important reason to quit in all 7 branches of the public sector.

Several policy makers have called for a change: The public sector should attempt to attract the economy's best and brightest managers. In the words of the National Commission on the Public Service (2003): “Salaries for [executives in government] should be based on the compelling need to recruit and retain the best people possible.”(p.26)2 This paper questions this view. In a nutshell, we show that, if demand for public sector output is not too high, perfect competition on all markets results in an equilibrium where relatively few of the more able managers seek employment in the public sector. The equilibrium is efficient. Hence, attempts to attract a more able managerial workforce to the public sector by increasing remuneration to private-sector levels will reduce efficiency. We develop a model of a perfectly competitive economy with two sectors, the public sector and the private sector. The sectors differ only in the kind of output that is produced; the production technology and the institutional environment are assumed identical. Production takes place in units consisting of one agent (the manager).3 Output is homogeneous within a sector, and is sold at the market-clearing price. Further, agents are residual claimants of their unit.4 Crucially, agents in our economy differ in two characteristics. First, agents differ in managerial talent. Talent increases one's effectiveness as a manager. Hence, better managers earn a higher income and attain higher utility. Second, agents in our economy differ in public service motivation (PSM), which we define as a relative preference for working in the public sector. Public service motivation can arise from a preference for tasks specific to the public sector, for contributing to goals specific to public organizations, or for helping the specific set of clients that is served by public organizations in sectors like health care and education.5 In most of the paper we let a person's PSM be independent of effort and output; later on, we relax this assumption. Crucially, we assume that PSM is sufficiently widespread in the economy (or, equivalently, that demand for public sector output is not too high) so that in equilibrium the marginal agents – those indifferent between working in either sector – have positive public service motivation. Consequently, the equilibrium price of public sector output must be lower than the price of output in the private sector. For otherwise, a given amount of production in the public sector would yield agents equal or higher revenue and higher motivational utility compared to the private sector, so that no one with positive PSM would be willing to become manager of a unit in the private sector. This difference in output prices between the public and the private sector has profound implications for the effect of managerial ability on an agent's payoff in the two sectors, and so for the sorting of people into public and private management. We show that, in any equilibrium where demand for public sector output is not too high, the marginal return to managerial ability is higher in the private sector than in the public sector. Hence, the relative attractiveness of the public sector decreases in ability, and when the right tail of the ability distribution is sufficiently long, all of the most talented agents reside in the private sector. Furthermore, relatively many of the least able agents sort into the public sector. An important aspect of our analysis is that low remuneration for agents in the public sector arises endogenously. While this implies that the public sector attracts agents with relatively low ability, it is the least costly way of producing a given amount of public sector output. Hence, attempts to attract a more able managerial workforce to the public sector by increasing remuneration to private-sector levels are not efficient, neither from the perspective of a policy maker minimizing cost of public goods provision nor for a social planner maximizing social welfare. Our theory is well in line with recent empirical findings on public–private wage differentials at the higher echelons as presented by Bargain and Melly (2008), using panel data for France. Whereas cross-sectional estimates show substantial negative public sector wage premia at the top of the wage distribution, these are much smaller when controlling for individual fixed effects. Bargain and Melly (2008) conclude from this finding that: “At the top of the wage distribution, agents with the highest wage potential ... have self-selected in the private sector” (p.13). Earlier papers on public–private wage differentials also find public sector wage penalties at the top of the wage distribution (Poterba and Rueben, 1994, Disney and Gosling, 1998 and Melly, 2005), but cannot account for endogenous selection effects.6 Our theory is also applicable beyond the public–private setting. For instance, jobs offered by non-profit organizations are often regarded as attractive to intrinsically motivated people (cf. Preston, 1989 and Rose-Ackerman, 1996). In line with this, most empirical studies find a negative wage differential in the non-profit sector (Mocan and Tekin (2003) being a notable exception), and some studies attribute this finding partially to selection effects. For instance, Weisbrod (1983) finds a 20% wage penalty for lawyers in non-profit “public interest” firms, while Goddeeris (1988) argues that a large part of this differential is driven by selection. In line with our theory, Preston (1989) finds that the non-profit wage penalty is higher for managers and professionals than for sales and clerical workers, and her results support the hypothesis that the wage difference is partially driven by selection. Lastly, Roomkin and Weisbrod (1999) show that top executives in for-profit hospitals receive both higher total income and stronger monetary incentives than their counterparts in non-profit hospitals, and that these differences are smaller at lower levels in the hierarchy. We proceed as follows. The next section discusses related literature. Section 3 describes the model, which is next analyzed in Section 4. In Section 5, we study the case where utility derived from PSM depends on output. Section 6 concludes.