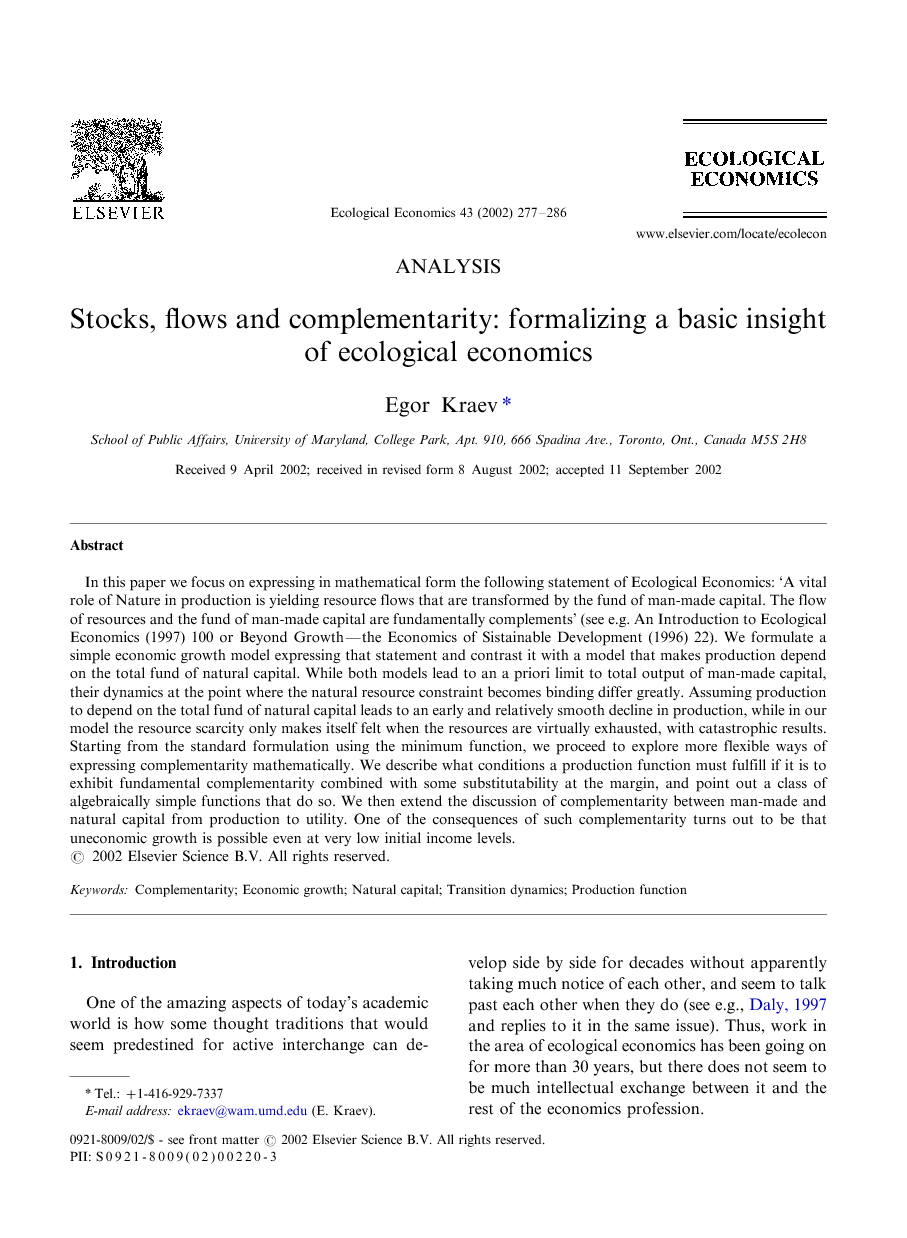 In this paper we focus on expressing in mathematical form the following statement of Ecological Economics: ‘A vital role of Nature in production is yielding resource flows that are transformed by the fund of man-made capital. The flow of resources and the fund of man-made capital are fundamentally complements’ (see e.g. An Introduction to Ecological Economics (1997) 100 or Beyond Growth—the Economics of Sistainable Development (1996) 22). We formulate a simple economic growth model expressing that statement and contrast it with a model that makes production depend on the total fund of natural capital. While both models lead to an a priori limit to total output of man-made capital, their dynamics at the point where the natural resource constraint becomes binding differ greatly. Assuming production to depend on the total fund of natural capital leads to an early and relatively smooth decline in production, while in our model the resource scarcity only makes itself felt when the resources are virtually exhausted, with catastrophic results. Starting from the standard formulation using the minimum function, we proceed to explore more flexible ways of expressing complementarity mathematically. We describe what conditions a production function must fulfill if it is to exhibit fundamental complementarity combined with some substitutability at the margin, and point out a class of algebraically simple functions that do so. We then extend the discussion of complementarity between man-made and natural capital from production to utility. One of the consequences of such complementarity turns out to be that uneconomic growth is possible even at very low initial income levels.

One of the amazing aspects of today's academic world is how some thought traditions that would seem predestined for active interchange can develop side by side for decades without apparently taking much notice of each other, and seem to talk past each other when they do (see e.g., Daly, 1997 and replies to it in the same issue). Thus, work in the area of ecological economics has been going on for more than 30 years, but there does not seem to be much intellectual exchange between it and the rest of the economics profession. One of the reasons for that might be because the two speak different languages. Most of today's economics is dealing with formal mathematical models, be it general equilibrium, differential equation or econometric ones. On the other hand, ecological economics literature on economic growth (see e.g., Daly, 1996 and Costanza et al., 1997) has so far mainly used verbal models to express its ideas, and has not yet given rise to a unified toolkit of mathematical prototypes. The goal of this paper is to translate some of the basic propositions of ecological economics into mathematical form. This will happen in two main areas: first, expanding the classical Solow growth model to include, besides labor and capital, the third member of the classical triad: land, alias Nature, and second, discussing the consequences for microeconomic production and utility theory of complementarity between produced and non-produced capital. One might well question the need for such translation, since the amount of information in a mathematical model is not higher than in the verbal model that gave rise to it. However, we think that such a translation is nevertheless worthwhile for the following reasons. First, as any translation into a different language, it has a potential of making the ideas accessible to new audiences, which is conducive (if not sufficient) for their wider adoption. Second, some arguments might be phrased more elegantly in a particular language and harder to communicate in a different one. Third, writing things down in a mathematical form often forces one to commit to a clearer and leaner account, with less ambiguity than the verbal model might have carried. Finally, making explicit the relationship between narratives and functional forms could be of use to applied modeling by providing prototype models reflecting particular stories. Our attempt is certainly not the first one. Of earlier sketches of mathematical foundations for ecological economics, to our knowledge the most far reaching contribution was done by Richard England (England, 1998 and England, 2000), who introduced natural capital as a factor of production complementary to labor and capital and proceeded to argue that since natural capital is arguably on the decline as man-made capital increases, eventually the former will become the limiting factor of production. From this was followed that total industrial output is a priori limited and a limit on population is also necessary for a stable (let alone growing) per capita income. While that represents an interesting start of a coherent mathematical representation of ecological economics, the specific mathematical formulation chosen in England (2000) amounts to focusing on the role of Nature as a provider of services and ignoring its role as a source of inputs for industrial production. In this paper, we will discuss the difference between the two roles and contrast the production function used in England (2000) with one that stresses the fundamental duality between transformative funds, like capital and labor, and input flows that are transformed. In essence, the difference between the two production functions is whether one takes the total fund of natural capital (England, 2000) or the flow of resources it yields (our model) to be the primary input to production. We will then compare the ways in which growing scarcity of natural capital works itself out in the behavior of the two models. It will be seen that although the long-term implications of limits on total and per capita output hold in both cases, the dynamics of the transition from the ‘empty world’ of natural resources relatively abundant with respect to available capital to the ‘full world’ of abundant man-made capital will be drastically different. In Section 3, we will then discuss different ways of expressing complementarity mathematically. While the perfect complementarity case, expressed by the minimum function, is commendable as an expository device, it is too rigid to adequately represent reality. In this section, we will discuss how the strict assumption of perfect complementarity between man-made and natural capital can be relaxed so as to retain the basic point and conclusions of the model while allowing for some substitution at the margin. We will specify the conditions that a function exhibiting such ‘weak complementarity’ must have, describe the shape of the corresponding isoquants and point out that a family of simple functions often used in applied models (namely the Constant Elasticity of Substitution (CES) functions) display that kind of behavior. Finally, in Section 4 we will expand the idea of basic complementarity between natural and man-made resources from the sphere of production to consideration of consumer utility, which will lead us to another facet of natural resource scarcity and uneconomic growth.

In this paper we attempt to translate two key propositions of ecological economics into mathematical form and glance at some of their implications. The first was the distinction between transformative funds and transformed flows. We compare an economic growth model with Nature entered as one more fund to one where its primary role was as a source of resource flows. We find that the two models exhibit drastically different dynamics at the point of transition from a mode of production limited by availability of man-made capital (‘empty world’) to a mode of production limited by availability of natural capital (‘full world’). While the first model signals the increasing scarcity relatively early through a gentle decline in growth rates, in the second model the scarcity only has an impact on production when natural capital is virtually exhausted, implying a necessity of curbing production beforehand through other mechanisms if we want to avoid a catastrophic crash-landing. The second issue we take up is complementarity between man-made and natural capital. After having included this complementarity into both our growth models, we proceed to discuss ways of formulating it mathematically in ways less rigid than the minimum function with its fixed-proportion implications. It turns out that the CES functions widely used in applied modeling have the desired properties, namely isoquants shaped like those of the minimum function, but with the corner smoothed out and a parameter regulating the degree of smoothing. Finally, we move from complementarity in production to complementarity in consumption, and briefly discuss its implications for development policy. Overall, we conclude that the ideas of ecological economics constitute a nontrivial contribution to economic growth theory. We hope that this paper will help a wider appreciation of the former.