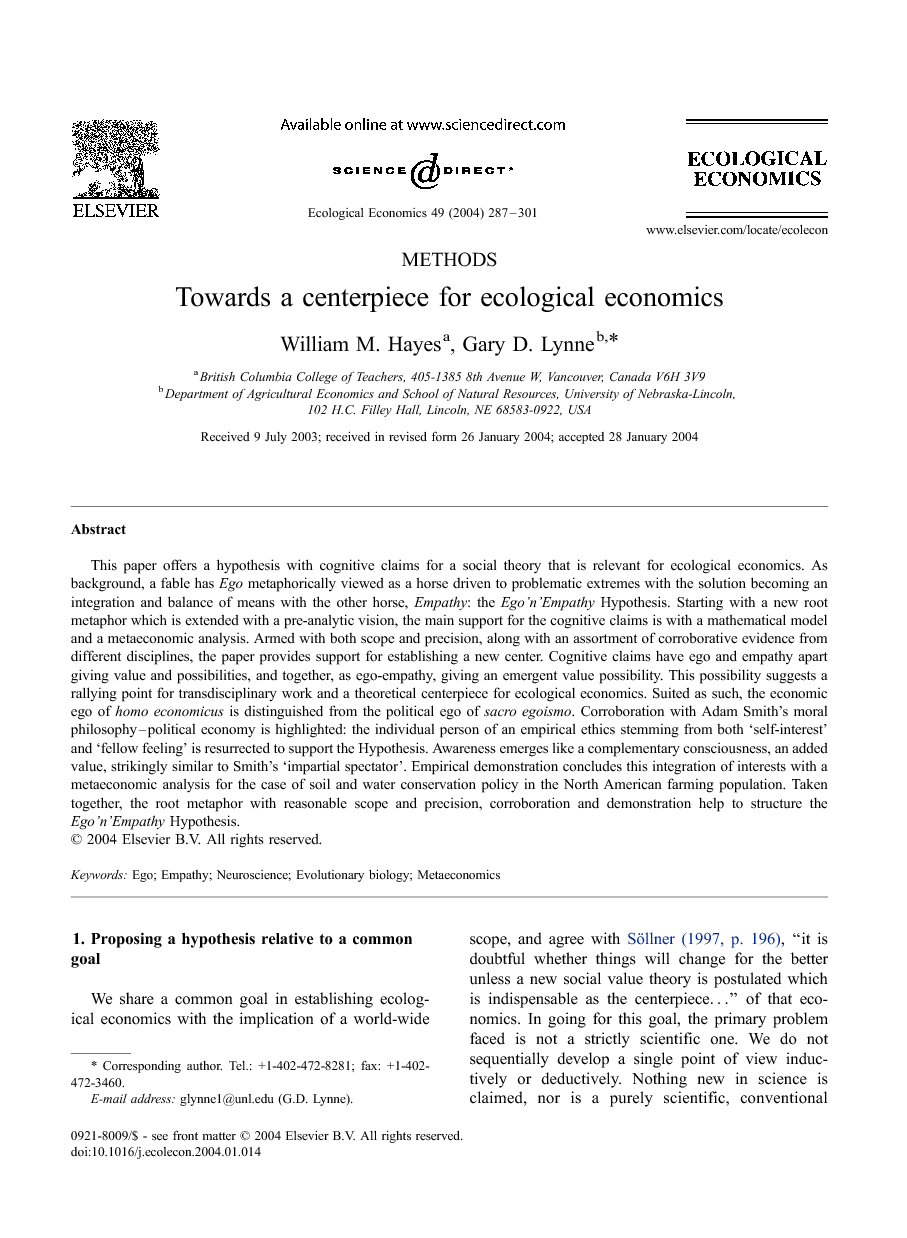 This paper offers a hypothesis with cognitive claims for a social theory that is relevant for ecological economics. As background, a fable has Ego metaphorically viewed as a horse driven to problematic extremes with the solution becoming an integration and balance of means with the other horse, Empathy: the Ego’n’Empathy Hypothesis. Starting with a new root metaphor which is extended with a pre-analytic vision, the main support for the cognitive claims is with a mathematical model and a metaeconomic analysis. Armed with both scope and precision, along with an assortment of corroborative evidence from different disciplines, the paper provides support for establishing a new center. Cognitive claims have ego and empathy apart giving value and possibilities, and together, as ego-empathy, giving an emergent value possibility. This possibility suggests a rallying point for transdisciplinary work and a theoretical centerpiece for ecological economics. Suited as such, the economic ego of homo economicus is distinguished from the political ego of sacro egoismo. Corroboration with Adam Smith's moral philosophy–political economy is highlighted: the individual person of an empirical ethics stemming from both ‘self-interest’ and ‘fellow feeling’ is resurrected to support the Hypothesis. Awareness emerges like a complementary consciousness, an added value, strikingly similar to Smith's ‘impartial spectator’. Empirical demonstration concludes this integration of interests with a metaeconomic analysis for the case of soil and water conservation policy in the North American farming population. Taken together, the root metaphor with reasonable scope and precision, corroboration and demonstration help to structure the Ego’n’Empathy Hypothesis.

Our project is ambitious. We propose to put heart into standard neoclassical economics, complementing what has gone before. Where the primary premise of economics is applied to egoism, we hypothesize the same principle applied to ego and empathy in structuring the Ego’n’Empathy Hypothesis. Further, we assert the third part, an emergent value from them working together. There appear to be good grounds for adding empathy as a complement to the economic model, and thereby transforming it. We rally around the Hypothesis as the vehicle for this transformation, with metaeconomics as the analytical engine of this change. The vehicle and engine have been tested and work well. The Fable of Ego’n’Empathy dramatizes a root metaphor of ego with excessive behavior, addictions and overwhelming consumptive habits being out of control, to the point of threatening human existence. Greed is grotesque and egomania causal. Relative to an equilibrium of the social elements, we see an inflated and controlling Societal sphere with Nature separated out, at worst as a wasteland and at best as a value-less resource; a residual claimant on the national product. Community and Culture come into view impoverished, corrupted, and void of empathic space. In the Hypothesis, Empathy finds a place along side Ego, giving the real potential for a sustainable social equilibrium. As we move forward, metaeconomics starts to represent the root metaphor of the Fable and implicit values of the pre-analytic vision becoming explicit and put in technical terms. This has been the historical approach of development in economic theory and practice with some things left as metaphor and allegory perhaps due to the emotional loading they carry (see Lagueux, 1999). By teaming empathy to the standard economic model, by building on the base of an alternative root metaphor and pre-analytic vision, while drawing on biology, neuroscience, evolutionary psychology and numerous other sources, speaks well for the Hypothesis which metaeconomics works, and holds out potential for utilization in different fields. Affirming the Hypothesis also indicates an overall paradigm shift when making a place for empathy as an equal opposite and complement to ego. While being inclusive of paradigm-coexistence and providing a new metaphorical basis of economic behavior, Ego’n’Empathy shifts but does not stray far from the dominant neoclassical economic theory of the day in that we use similar analytical devices. It is also radical, though, as the root metaphor now includes Empathy as a main feature, a norm of real experience. Intriguingly, neoclassical economics and the microeconomic tool of homo economicus as we know it becomes a special case of the metaeconomic model. If empirical testing results in failure to reject the null hypotheses of ‘no empathic, other-interest at work’ and ‘no lack of substitution possibilities’, we are back to the standard neoclassical economic model. All testing to date, however, suggests we cannot go back. As a result, we believe the social philosophy and alternative way of integrating ideas represented in metaeconomics helps in better understanding, and converting concepts, moving metaphors and other images into technical economics. We also see metaeconomics as potentially inclusive of many other constructs, all related to empathy and the need for integration, as represented in: Sen's (1977) “claims of others;” Elster's (1986/1989) “multiple self” problem, emphasized in Moldoveanu and Stevenson's (2001) possibility of an “internally incoherent nature of selfhood;” Frank's (1988) “commitments”, George's (1993) “metapreferences;” Lux's (2003) call to “give up greed” while recognizing the humanistic side of human nature; and Schelling's (1984) “ego-economics”. Earlier papers show how many of these ideas fit within metaeconomics Lynne et al., 1995, Lynne and Casey, 1998, Lynne, 1999 and Lynne, 2002. Söderbaum (1999, p. 162) points out how any particular scientific paradigm is as much about values and ideology and is “not exclusively a matter of truth”. We agree, although it seems a reasonable goal to make such values and the ideology explicit, and also subject to reasoned scrutiny. We also see shortcomings in our proposal, even confess to evils of eclecticism considered necessary to structure a hypothesis with cognitive claims. We hope the greater evil of perverting or ignoring crucial evidence around the pivotal point of Ego is avoided in the transformation to Ego’n’Empathy.