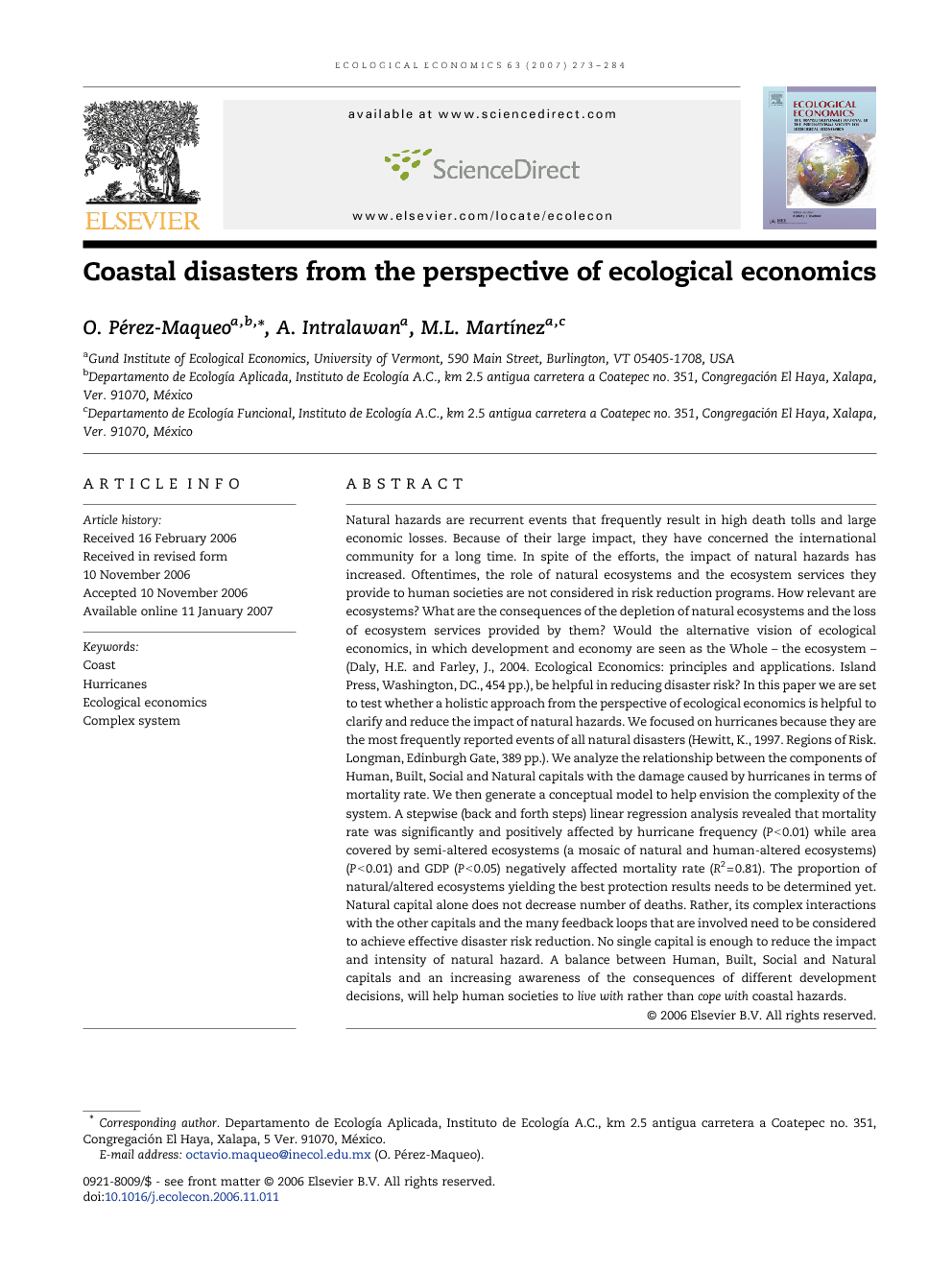 Natural hazards are recurrent events that frequently result in high death tolls and large economic losses. Because of their large impact, they have concerned the international community for a long time. In spite of the efforts, the impact of natural hazards has increased. Oftentimes, the role of natural ecosystems and the ecosystem services they provide to human societies are not considered in risk reduction programs. How relevant are ecosystems? What are the consequences of the depletion of natural ecosystems and the loss of ecosystem services provided by them? Would the alternative vision of ecological economics, in which development and economy are seen as the Whole – the ecosystem – (Daly, H.E. and Farley, J., 2004. Ecological Economics: principles and applications. Island Press, Washington, DC., 454 pp.), be helpful in reducing disaster risk? In this paper we are set to test whether a holistic approach from the perspective of ecological economics is helpful to clarify and reduce the impact of natural hazards. We focused on hurricanes because they are the most frequently reported events of all natural disasters (Hewitt, K., 1997. Regions of Risk. Longman, Edinburgh Gate, 389 pp.). We analyze the relationship between the components of Human, Built, Social and Natural capitals with the damage caused by hurricanes in terms of mortality rate. We then generate a conceptual model to help envision the complexity of the system. A stepwise (back and forth steps) linear regression analysis revealed that mortality rate was significantly and positively affected by hurricane frequency (P < 0.01) while area covered by semi-altered ecosystems (a mosaic of natural and human-altered ecosystems) (P < 0.01) and GDP (P < 0.05) negatively affected mortality rate (R2 = 0.81). The proportion of natural/altered ecosystems yielding the best protection results needs to be determined yet. Natural capital alone does not decrease number of deaths. Rather, its complex interactions with the other capitals and the many feedback loops that are involved need to be considered to achieve effective disaster risk reduction. No single capital is enough to reduce the impact and intensity of natural hazard. A balance between Human, Built, Social and Natural capitals and an increasing awareness of the consequences of different development decisions, will help human societies to live with rather than cope with coastal hazards.

It is troubling that disaster impacts have been increasing as global economic growth has. This suggests that economic growth has not been properly directed at mitigating disaster risks. The problem is that disasters are still usually (and wrongly) perceived as “exceptional natural events”. Our results revealed that a semi-altered landscape and GDP significantly reduce mortality rate. However, it remains to be determined the ratio of natural/transformed ecosystems that yield the best protection service. Balance between Human, Built, Social and Natural capitals and an increasing awareness of the consequences of different development decisions, will help human societies to live with rather than cope with coastal disasters.