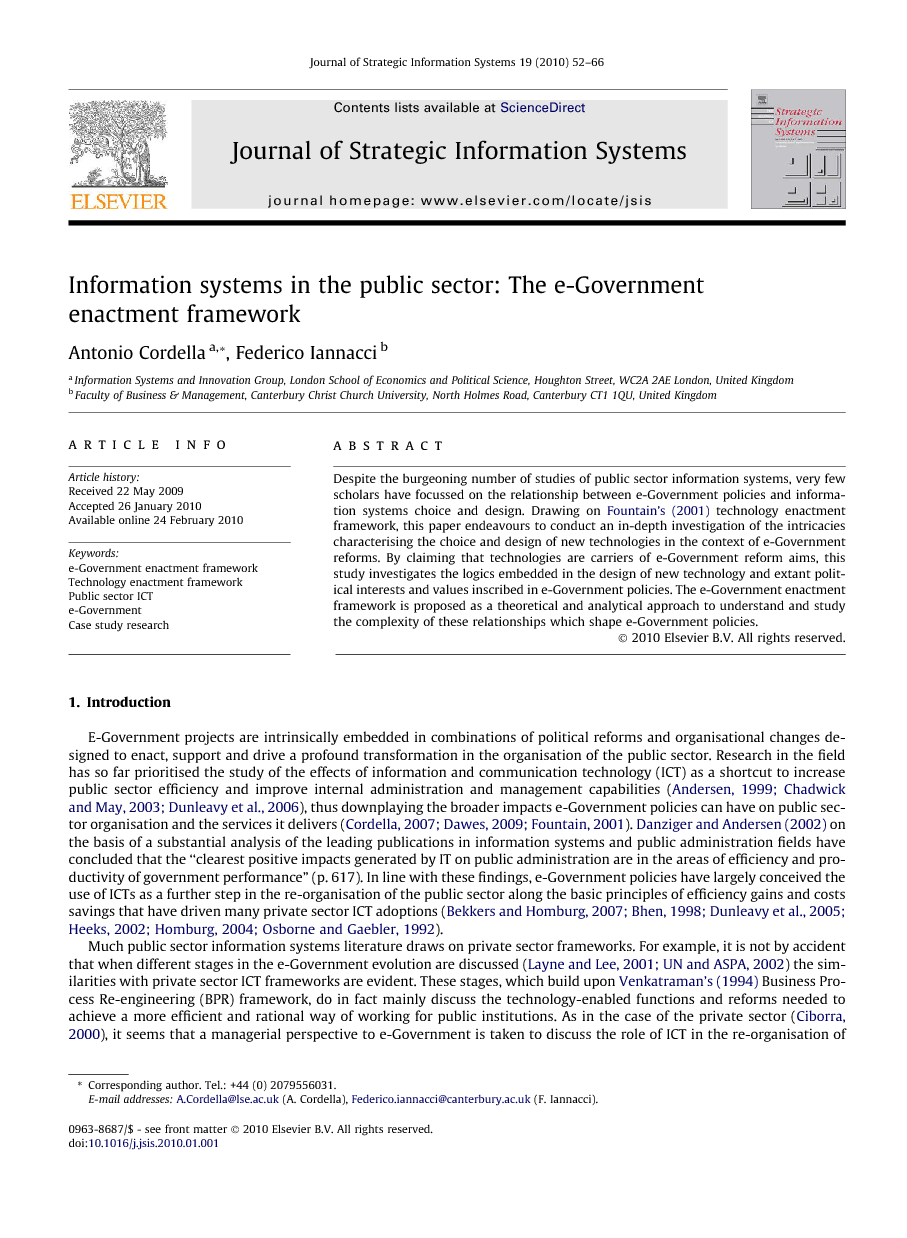 Despite the burgeoning number of studies of public sector information systems, very few scholars have focussed on the relationship between e-Government policies and information systems choice and design. Drawing on Fountain’s (2001) technology enactment framework, this paper endeavours to conduct an in-depth investigation of the intricacies characterising the choice and design of new technologies in the context of e-Government reforms. By claiming that technologies are carriers of e-Government reform aims, this study investigates the logics embedded in the design of new technology and extant political interests and values inscribed in e-Government policies. The e-Government enactment framework is proposed as a theoretical and analytical approach to understand and study the complexity of these relationships which shape e-Government policies.

E-Government projects are intrinsically embedded in combinations of political reforms and organisational changes designed to enact, support and drive a profound transformation in the organisation of the public sector. Research in the field has so far prioritised the study of the effects of information and communication technology (ICT) as a shortcut to increase public sector efficiency and improve internal administration and management capabilities (Andersen, 1999, Chadwick and May, 2003 and Dunleavy et al., 2006), thus downplaying the broader impacts e-Government policies can have on public sector organisation and the services it delivers (Cordella, 2007, Dawes, 2009 and Fountain, 2001). Danziger and Andersen (2002) on the basis of a substantial analysis of the leading publications in information systems and public administration fields have concluded that the “clearest positive impacts generated by IT on public administration are in the areas of efficiency and productivity of government performance” (p. 617). In line with these findings, e-Government policies have largely conceived the use of ICTs as a further step in the re-organisation of the public sector along the basic principles of efficiency gains and costs savings that have driven many private sector ICT adoptions (Bekkers and Homburg, 2007, Bhen, 1998, Dunleavy et al., 2005, Heeks, 2002, Homburg, 2004 and Osborne and Gaebler, 1992). Much public sector information systems literature draws on private sector frameworks. For example, it is not by accident that when different stages in the e-Government evolution are discussed (Layne and Lee, 2001 and UN and ASPA, 2002) the similarities with private sector ICT frameworks are evident. These stages, which build upon Venkatraman’s (1994) Business Process Re-engineering (BPR) framework, do in fact mainly discuss the technology-enabled functions and reforms needed to achieve a more efficient and rational way of working for public institutions. As in the case of the private sector (Ciborra, 2000), it seems that a managerial perspective to e-Government is taken to discuss the role of ICT in the re-organisation of work activities. ICT is perceived as the main instrument to achieve these goals. The challenge seems to be the definition of the right technology to achieve a pre-defined outcome. Thus a vast literature has been produced to discuss the effects of ICT adoptions at the different government levels (Asgarkhani, 2005, Denziger and Andersen, 2002, Gupta and Jana, 2003, Melitski, 2003 and Moon, 2002) and to benchmark countries against indexes of ICT readiness (UN, 2001), as if a better score would lead to more effective e-Government programmes. Although valuable, this focus on efficiency is limited because it pivots around best practices and universal strategies to successfully implement e-Government programmes neglecting the existing debate about the limitation of the notions of “best practices” (Wagner and Newell, 2004, Wagner and Newell, 2006 and Wagner et al., 2006). ICT developments in the public sector should pay more attention to the complexity that is associated with their implementation, rather than focusing on best practices and universal strategies to prescribe how to successfully implement e-Government programmes. Outcomes of public sector reforms have in fact an impact on social and political dimensions that are not accounted for in private sector frameworks (Aberbach and Christensen, 2005, Bozeman and Bretschneider, 1986, Cordella, 2007, Frederickson, 2000 and Moore, 1995). By downplaying this difference, e-Government programmes have often referred to private sector ICTs as a further step in the re-organisation of the public sector along the basic principles of efficiency that are governing the private sector (Andersen, 1999, Chadwick and May, 2003 and Thong et al., 2000). A different approach to the problem emerges from the studies that have looked at the socio-technical endeavours taking place around the deployment of ICTs in the public sector in general and public sector organisations in particular (Avgerou and Walsham, 2000, Contini and Lanzara, 2008, Denziger and Andersen, 2002, Fountain, 2001 and Fountain, 2007). In these cases, ICT has been conceptualised within the public sector context and a more specific explanation of the complexity of public sector e-Government projects has been proposed. By following this train of thought, we endeavour to show how e-Government policies shape the choice and design of ICT projects so that technologies become carriers of the e-Government policies’ goals and aims. Moreover, we argue that, these interests carried by technology are enacted by public sector organisations in their daily base actions and routines (Fountain, 2001) so that the outcome of e-Government reforms is shaped by the e-Government policies’ aims and goals, the technological characteristics shaped by these policies and the organisational practices which ultimately shape the actual outcomes of the reforms. By so doing, we attempt to fill the gap in the literature identified by Yildiz (2007) who has maintained that “what is also lacking in the treatment of the subject is a more in-depth analysis of the political nature of the e-Government development processes, and a deeper recognition of complex political and institutional environments” (p. 646). Our conclusions are built on the findings of the study of e-Government reforms in the criminal justice system of England and Wales. Drawing on a revised and extended version of Fountain’s (2001) technology enactment framework, what we have defined as the e-Government enactment framework, our in-depth empirical study demonstrates that in its original form the technology enactment framework does not account for the e-Government policy drivers which influence the choice and design of public sector ICTs. These drivers, as our case will show, are indeed an important force that shapes the very conception of ICTs in the public sector and the outcome of e-Government reforms. The remainder of this paper unfolds in the following fashion: Section 2 reviews the extant literature on e-Government studies and presents the theoretical background upon which our work is grounded. Section 3 shows the methodology in use in this paper and Section 4 discusses the in-depth case study of ICT deployment in the criminal justice system in England and Wales. Section 5, subsequently, analyses the case and presents the e-Government enactment framework. Section 6, discusses the implications emerging from the framework we propose. Section 7, finally, draws the paper to a close with concluding remarks.

The e-Government literature has mainly drawn on private sector, managerial models that essentially conceive of technology as an enabler, thus downplaying the role played by the organisational context where public sector ICTs are embedded. Even if e-Government research has mainly built on frameworks which downplay this context, there are good examples of contributions which have not followed this path. Danziger et al. (1982) have for example discussed the role of information systems in the organisational politics of American local governments. Their study looks at the impact of information technology on the distribution of power among organisational groups such as politicians, administrators, financial experts and urban planners. In so doing they have discussed how information systems reinforce prevailing structures of control and prevailing biases within the government questioning therefore the impact of information systems on public sector organisation and outcomes. This approach to the study of ICT impacts on public sector organisation is however still not at the centre of the research interest in the field. Research on e-Government, as discussed in the literature reviews proposed by Yildiz, 2007 and Heeks and Bailur, 2007, and Danziger and Andersen (2002), shows that the vision which “considers IT merely one more resource, albeit a powerful and protean one, in the arsenal of politics-as usual” (p. 593) (Denziger and Andersen, 2002) is still dominant and that the main focus of research in the field is still concerned with managerial and economic aspects. The e-Government enactment framework we propose in this paper builds on the IS research tradition which studies ICTs and the social and organisational settings in which they are embedded as relationships of mutual shaping (Bijker and Law, 1994, Orlikowski and Baroudi, 1991 and Sawyer and Rosenbaum, 2000). In so doing it better accounts for the different forces which shape e-Government policies by shedding light on the mutual cycle of reinforcement which shapes e-Government polices and ICTs. We therefore suggest that the design of technology is infused with shifting political logics and that technology should be conceived of as a carrier of long-lasting interests that are often outlived by those visions and values inscribed in extant e-Government policies. Little wonder that the choice and design of technology is often fraught with tensions deriving from the mismatch between long-lasting values inscribed in pre-existing technologies and transient values reflecting ad hoc e-Government policy initiatives.