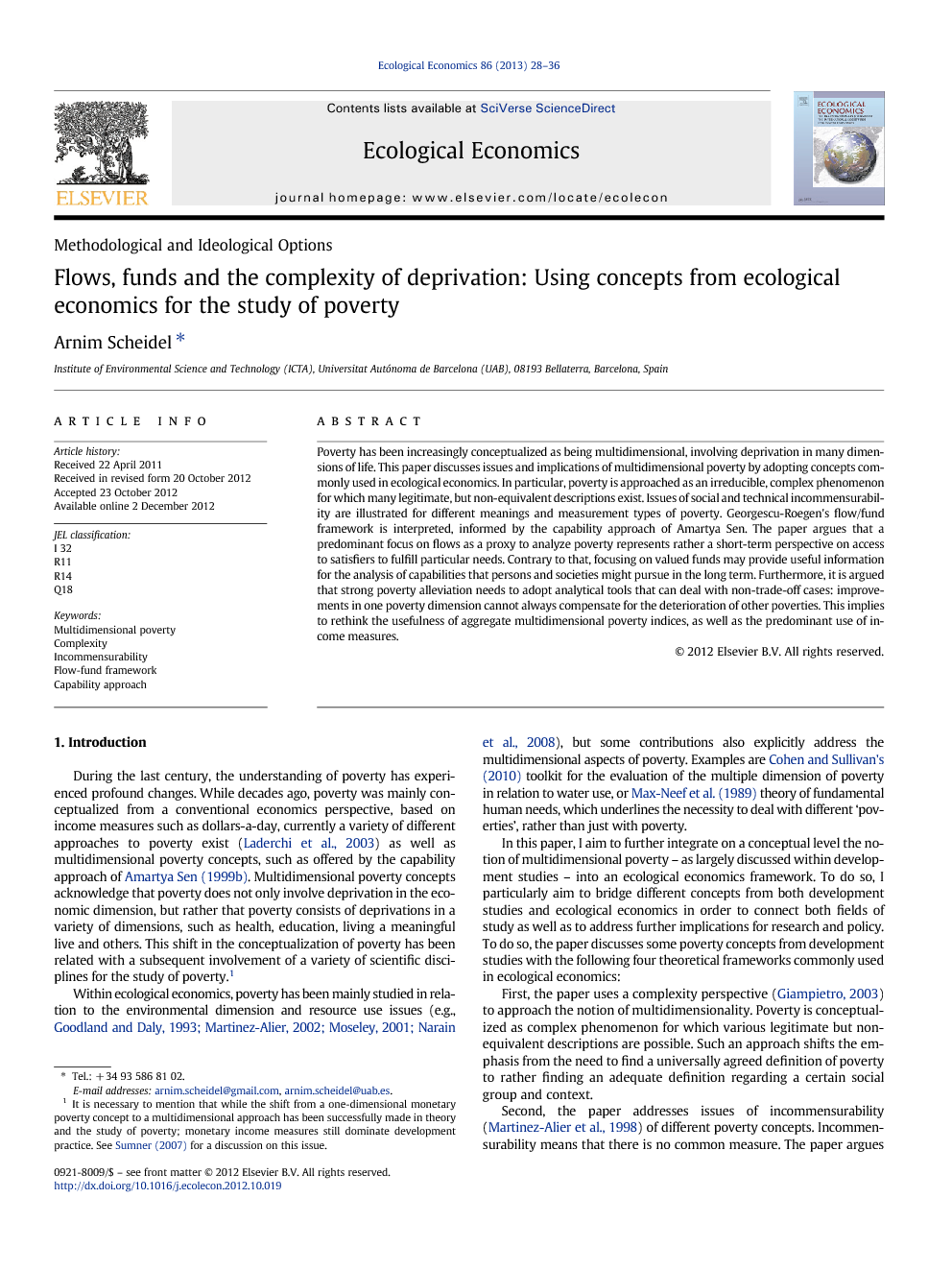 Poverty has been increasingly conceptualized as being multidimensional, involving deprivation in many dimensions of life. This paper discusses issues and implications of multidimensional poverty by adopting concepts commonly used in ecological economics. In particular, poverty is approached as an irreducible, complex phenomenon for which many legitimate, but non-equivalent descriptions exist. Issues of social and technical incommensurability are illustrated for different meanings and measurement types of poverty. Georgescu-Roegen's flow/fund framework is interpreted, informed by the capability approach of Amartya Sen. The paper argues that a predominant focus on flows as a proxy to analyze poverty represents rather a short-term perspective on access to satisfiers to fulfill particular needs. Contrary to that, focusing on valued funds may provide useful information for the analysis of capabilities that persons and societies might pursue in the long term. Furthermore, it is argued that strong poverty alleviation needs to adopt analytical tools that can deal with non-trade-off cases: improvements in one poverty dimension cannot always compensate for the deterioration of other poverties. This implies to rethink the usefulness of aggregate multidimensional poverty indices, as well as the predominant use of income measures.

During the last century, the understanding of poverty has experienced profound changes. While decades ago, poverty was mainly conceptualized from a conventional economics perspective, based on income measures such as dollars-a-day, currently a variety of different approaches to poverty exist (Laderchi et al., 2003) as well as multidimensional poverty concepts, such as offered by the capability approach of Amartya Sen (1999b). Multidimensional poverty concepts acknowledge that poverty does not only involve deprivation in the economic dimension, but rather that poverty consists of deprivations in a variety of dimensions, such as health, education, living a meaningful live and others. This shift in the conceptualization of poverty has been related with a subsequent involvement of a variety of scientific disciplines for the study of poverty.1 Within ecological economics, poverty has been mainly studied in relation to the environmental dimension and resource use issues (e.g., Goodland and Daly, 1993, Martinez-Alier, 2002, Moseley, 2001 and Narain et al., 2008), but some contributions also explicitly address the multidimensional aspects of poverty. Examples are Cohen and Sullivan's (2010) toolkit for the evaluation of the multiple dimension of poverty in relation to water use, or Max-Neef et al. (1989) theory of fundamental human needs, which underlines the necessity to deal with different ‘poverties’, rather than just with poverty. In this paper, I aim to further integrate on a conceptual level the notion of multidimensional poverty – as largely discussed within development studies – into an ecological economics framework. To do so, I particularly aim to bridge different concepts from both development studies and ecological economics in order to connect both fields of study as well as to address further implications for research and policy. To do so, the paper discusses some poverty concepts from development studies with the following four theoretical frameworks commonly used in ecological economics: First, the paper uses a complexity perspective (Giampietro, 2003) to approach the notion of multidimensionality. Poverty is conceptualized as complex phenomenon for which various legitimate but non-equivalent descriptions are possible. Such an approach shifts the emphasis from the need to find a universally agreed definition of poverty to rather finding an adequate definition regarding a certain social group and context. Second, the paper addresses issues of incommensurability (Martinez-Alier et al., 1998) of different poverty concepts. Incommensurability means that there is no common measure. The paper argues that the study of poverty has to deal with incommensurability of different meanings as well as of different types of measurements of poverty. Third, the different implications of analyzing poverty in terms of access to flows versus access to assets that allow for the production of flows (Carter and Barrett, 2006) are discussed in relation to the flow-fund framework of Georgescu-Roegen (1971). The paper then provides a further interpretation of the flow-fund framework in the light of Sen's (1999b) capability approach and arguments are presented for why the analysis of capabilities needs to focus on funds rather than on flows. Finally, some reflections on how to integrate the many dimensions and measures of poverty within assessment approaches are presented. In an analogy to the debate of weak and strong sustainability (Daly, 1990), aspects of weak and strong poverty alleviation are discussed. The paper argues that ‘strong poverty alleviation’ efforts need to adopt analytical tools that can deal with non-trade-off cases: improvements in one poverty dimension cannot always compensate for the deterioration of other poverties. For example, an increase in living standards, such as buying a new TV, cannot necessarily compensate for the deteriorations in health, such as the loss of a child. Furthermore, an increase in income cannot necessarily substitute for the deterioration of the underlying factors that allow producing income as well as the creation of capabilities in the long-term. The paper is organized as follows: Section 2 introduces the conceptual approach to poverty taken in this paper and distinguishes between meaning and measurement of poverty. Section 3 then reviews different meanings of poverty, while Section 4 discusses the characteristics of different types of poverty measures. Section 5 discusses issues of weak and strong poverty alleviation, and Section 6 concludes with some general implications for the study of poverty.

This paper has highlighted the plurality of poverty concepts, both in terms of meanings and measurement types. Understanding poverty as an irreducible, complex phenomenon for which various legitimate descriptions are possible may help to deal with the many definitions on an epistemological level. It further enables integrating new characteristics of deprivation into an understanding of poverty that life might bring up in the future; may they be articulated by development professionals or by the poor themselves. Yet, acknowledging that poverty is complex and multidimensional also poses new challenges for research and related policies: it becomes necessary to deal with social and technical incommensurability of different meanings and measurement types of poverty. Acknowledging the many meanings requires not simply referring to ‘poverty’ but being explicit about the questions of ‘poor in what?’ and the involved values and preferences. Rather than trying to find a universally objective meaning of poverty, a complexity approach to poverty emphasizes the need to find the adequate perception of poverty regarding a certain social group and context. With regard to poverty measurement, the paper presented some considerations on how to account for the many dimensions of poverty. Common approaches are multidimensional poverty indices such as the MPI. Yet, they might represent only weak poverty alleviation, as they may allow that improvements in one poverty dimension (e.g., having a new TV) can compensate for other poverties (e.g., the loss of a child), which is not necessarily the goal of development. Hence, in order to achieve strong poverty alleviation, analytical tools will be needed to deal with situations in which improvements in one dimension cannot substitute for the deteriorations of other poverty dimensions. In this light, we also have to critically revise the predominant use of monetary flow measures, such as dollars-a-day. While such measures may inform about deprivation in income and consumption, they may trigger policies that boost the production of flows in the short-term at the costs of the underlying funds that enable the production of flows as well as the creation of capabilities in the long-term.