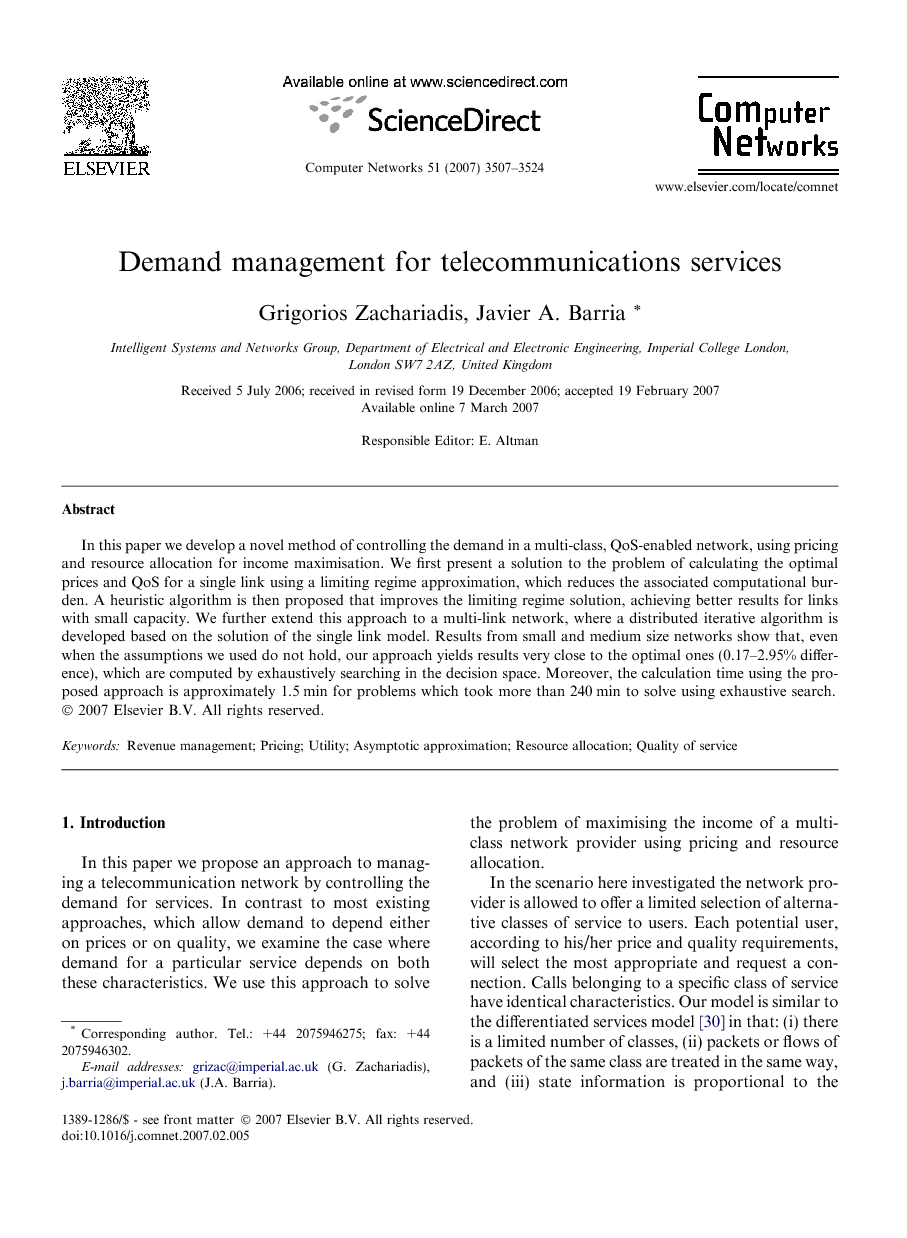 In this paper we develop a novel method of controlling the demand in a multi-class, QoS-enabled network, using pricing and resource allocation for income maximisation. We first present a solution to the problem of calculating the optimal prices and QoS for a single link using a limiting regime approximation, which reduces the associated computational burden. A heuristic algorithm is then proposed that improves the limiting regime solution, achieving better results for links with small capacity. We further extend this approach to a multi-link network, where a distributed iterative algorithm is developed based on the solution of the single link model. Results from small and medium size networks show that, even when the assumptions we used do not hold, our approach yields results very close to the optimal ones (0.17–2.95% difference), which are computed by exhaustively searching in the decision space. Moreover, the calculation time using the proposed approach is approximately 1.5 min for problems which took more than 240 min to solve using exhaustive search.

In this paper we analysed the problem of resource allocation and pricing, with the aim of income maximisation. The role of prices in a telecommunications environment can be twofold. Apart from being the well-known reward mechanism for the provider of the telecommunications resources, it is also a mechanism of selection and classification of users according to their utility requirements. The fact that users who demand higher services are prepared to pay more, can be used by the provider in any task that requires (or would be more efficiently performed with) segmentation or categorisation of the users. The problem we have addressed in this paper attempts to aid the decisions of a network provider regarding the quality and the price of calls belonging to different classes. After analysing the problem and its parameters, an approximation was presented, for the case when the number of calls of the route is very large. This approximation simplified all equations to a great extent. We developed a numerical method for improving the LR solution of [33], which would be more relevant for access links of smaller capacity. For the case of a network of many links, under the assumptions of link independence and similar load across different links, we have found an approximate solution which is within 3% from the optimal for all the cases studied, even when the assumption of uniform distribution, or the assumption of balanced load does not hold. For the approximate decentralised solution we use the Erlang fixed point iteration method. A matter of further research is to compare our algorithm to more general existing global optimisation methods. Another relevant extension of our work is to conduct a sensitivity analysis of our solution to the relationship between q and p. We are currently considering only static decisions in our model, but dynamic/adaptive versions of the algorithms presented in our paper are currently under investigation, where prices and quality change depending on the state of the network, and potential users are informed of the offered services and their prices. In general, although adaptive solutions offer better results in terms of income, this improvement comes at a cost, since the complexity of the decisions is increased, and users also face a more complicated system, where they cannot be sure about the prices in advance. Especially for the case of dynamic adjustments of prices and quality, preliminary results show that it is possible to improve the income from a network, but the complexity of the problem increases significantly. Another direction of research, which is currently under investigation, is balancing the relative load among alternative routes using pricing. This would improve the accuracy of our algorithm, which, as we show, partially relies on the assumption that the relative load is similar on all links.