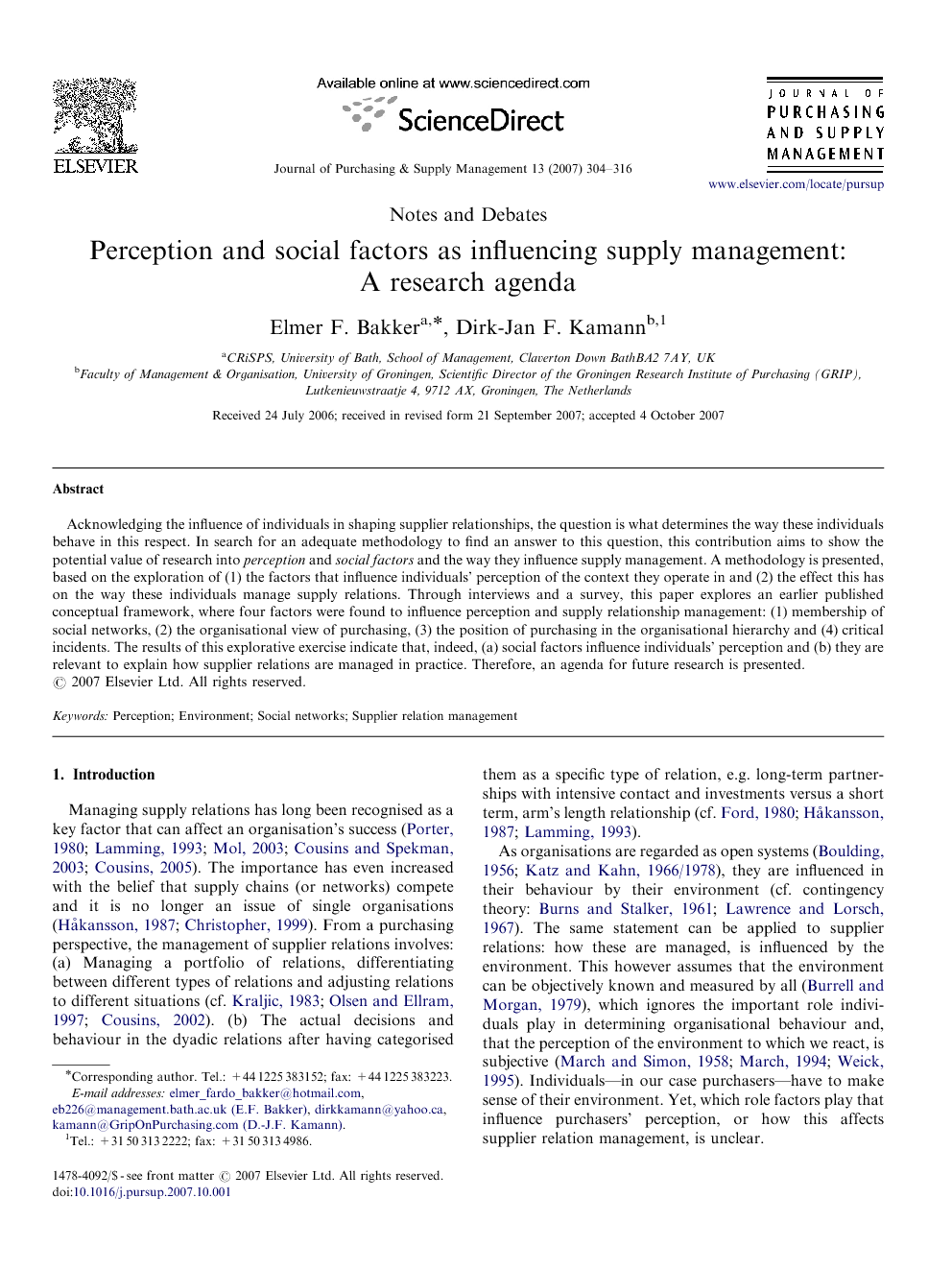 Acknowledging the influence of individuals in shaping supplier relationships, the question is what determines the way these individuals behave in this respect. In search for an adequate methodology to find an answer to this question, this contribution aims to show the potential value of research into perception and social factors and the way they influence supply management. A methodology is presented, based on the exploration of (1) the factors that influence individuals’ perception of the context they operate in and (2) the effect this has on the way these individuals manage supply relations. Through interviews and a survey, this paper explores an earlier published conceptual framework, where four factors were found to influence perception and supply relationship management: (1) membership of social networks, (2) the organisational view of purchasing, (3) the position of purchasing in the organisational hierarchy and (4) critical incidents. The results of this explorative exercise indicate that, indeed, (a) social factors influence individuals’ perception and (b) they are relevant to explain how supplier relations are managed in practice. Therefore, an agenda for future research is presented.

Managing supply relations has long been recognised as a key factor that can affect an organisation's success (Porter, 1980; Lamming, 1993; Mol, 2003; Cousins and Spekman, 2003; Cousins, 2005). The importance has even increased with the belief that supply chains (or networks) compete and it is no longer an issue of single organisations (Håkansson, 1987; Christopher, 1999). From a purchasing perspective, the management of supplier relations involves: (a) Managing a portfolio of relations, differentiating between different types of relations and adjusting relations to different situations (cf. Kraljic, 1983; Olsen and Ellram, 1997; Cousins, 2002). (b) The actual decisions and behaviour in the dyadic relations after having categorised them as a specific type of relation, e.g. long-term partnerships with intensive contact and investments versus a short term, arm's length relationship (cf. Ford, 1980; Håkansson, 1987; Lamming, 1993). As organisations are regarded as open systems (Boulding, 1956; Katz and Kahn, 1966/1978), they are influenced in their behaviour by their environment (cf. contingency theory: Burns and Stalker, 1961; Lawrence and Lorsch, 1967). The same statement can be applied to supplier relations: how these are managed, is influenced by the environment. This however assumes that the environment can be objectively known and measured by all (Burrell and Morgan, 1979), which ignores the important role individuals play in determining organisational behaviour and, that the perception of the environment to which we react, is subjective (March and Simon, 1958; March, 1994; Weick, 1995). Individuals—in our case purchasers—have to make sense of their environment. Yet, which role factors play that influence purchasers’ perception, or how this affects supplier relation management, is unclear. Perception is a general concept and can be seen as the outcome of a sensemaking process (Weick, 1995). The ‘subject’ of perception is the world around us of which we as individuals try to make sense, to enable us to exist (Kelly, 1955), give us identity (Weick, 1995) and direct behaviour (Webster and Wind, 1972). Perception is hence not specifically related to purchasing, it plays a role in many different fields, as it is inextricably bound to people. In this paper, perception is treated as a ‘picture’ of the relevant business environment to which the management of supplier relations is adjusted. Perception is context specific and therefore is ultimately interconnected to an objective and to action—in our case: the management of supplier relations to fulfil a certain buying need. As managing supplier relations is the adjustment to this ‘picture’ of the environment, in this research we focus on the ‘perception of managing supplier relations’. This contribution offers some exploratory findings on the role of perception and the factors that influence an individual's perceived relevant environment and appropriate way of managing supplier relations. We propose a future research agenda, based on the methods applied and discussed in this contribution, the way we operationalised concepts together with our exploratory findings. We build on previous work (Kamann and Bakker, 2004) and do not suggest that the concepts we use are ‘new’, yet the way they are combined and by explicitly taking into account individual's perception of managing supplier relationships we believe to contribute to purchasing literature and research. This paper is structured as follows: presentation of the conceptual framework in the context of existing literature, methodology, findings, discussion and a concluding research agenda.