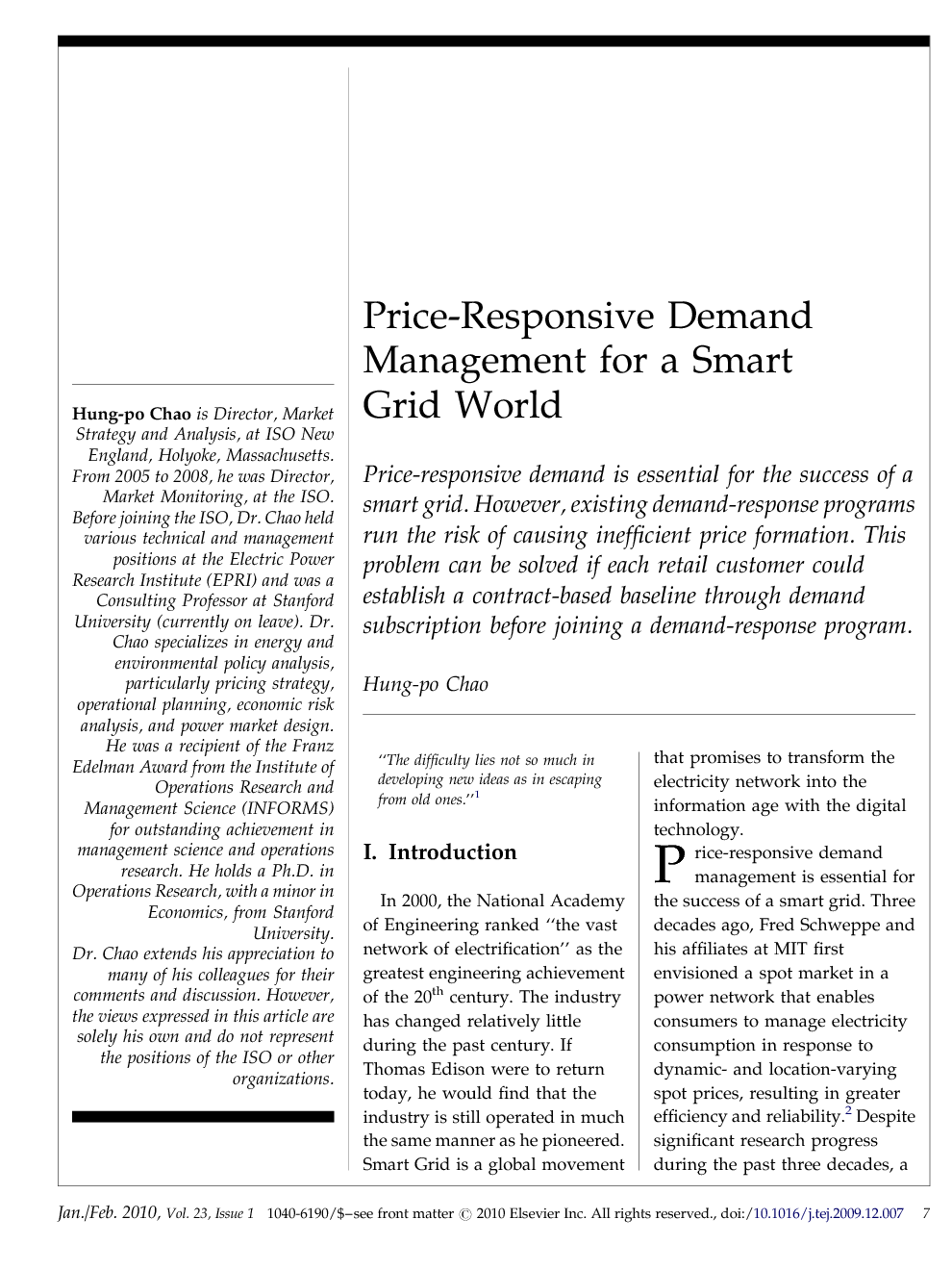 Price-responsive demand is essential for the success of a smart grid. However, existing demand-response programs run the risk of causing inefficient price formation. This problem can be solved if each retail customer could establish a contract-based baseline through demand subscription before joining a demand-response program.

In 2000, the National Academy of Engineering ranked “the vast network of electrification” as the greatest engineering achievement of the 20th century. The industry has changed relatively little during the past century. If Thomas Edison were to return today, he would find that the industry is still operated in much the same manner as he pioneered. Smart Grid is a global movement that promises to transform the electricity network into the information age with the digital technology. Price-responsive demand management is essential for the success of a smart grid. Three decades ago, Fred Schweppe and his affiliates at MIT first envisioned a spot market in a power network that enables consumers to manage electricity consumption in response to dynamic- and location-varying spot prices, resulting in greater efficiency and reliability.2 Despite significant research progress during the past three decades, a recent assessment by the Federal Energy Regulatory Commission indicates that demand response holds significant potential to benefit consumers but price-responsive demand remains an elusive target.3 Why has it been so difficult? Like most major socioeconomic changes, “the difficulty lies not so much in developing new ideas as in escaping from old ones.”1 Apparently, the inertia in the electric power industry is enormous because of its engineering complexity and capital intensity. Also apparently, there is a lack of financial incentives for retail customers and service providers to make the necessary investments in the advanced metering infrastructure and technologies that enable consumers to switch from a fixed uniform retail rate to dynamic real-time pricing. More specifically, the retail electric service retains many characteristics of the fully integrated utility structure that existed prior to restructuring. The retail rate design is based on the same cost-of-service principle that has been practiced for decades. Traditional rate design features cross-subsidies which resist changes. In particular, the cross-subsidization between peak and off-peak consumption under uniform pricing is well established in the public utility economics literature. Therefore, one of the difficulties in adopting real-time pricing is to win over consumers with high load profiles during peak hours.4 With a mandate from Congress, FERC has endorsed demand-response programs in wholesale electricity markets. These programs typically involve paying customers to reduce their demand during high-price periods.5 One of the common characteristics of such demand-response programs, including those administered by the ISO/RTO, is that they depend on the use of an administrative customer baseline to measure the amount of demand reduction.6 However, the customer baseline is a counterfactual consumption level that cannot be observed. Inherently, a consumer has superior knowledge of the customer baseline and can potentially take actions that are difficult to detect to influence its estimation. Therefore, the use of an administrative customer baseline is vulnerable to adverse incentives of moral hazard and adverse selection. Moreover, it could cause inefficient price formation in wholesale markets. As a consequence, the market price may not reflect the true marginal cost. This creates excessive incentive for consumers to under-consume, even when abundant low-cost supplies are available. The price formation problem is rooted in the neglected reality that the use of an administrative customer baseline entails allowing a consumer to sell energy that the consumer doesn’t own. This creates double payment benefits, because the consumer benefits from both the demand reduction payment and retail bill savings. As a result, it creates excessive incentive for consumers to under-consume, even when abundant low-cost supplies are available to meet high-value demands. In principle, the consumer does not own that amount of energy until it is paid for. Under a full-requirement contract, a consumer has the right to procure any amount of energy at a fixed price. But such an unlimited right does not give the consumer the tradable property right to a specific amount of energy. As we will demonstrate later in this article, the double payment benefits cause inefficient price formation in the wholesale energy market. If this problem is not appropriately addressed, demand-response programs could become counterproductive and ultimately undermine the development of efficient price-responsive demand.7 In other words, the cure may become worse than the disease. Demand subscription offers a contract-based two-sided baseline that eliminates the customer baseline problem. It allows retail consumers to contract and secure ownership for specific amounts of energy before they participate in demand-response programs. From the perspective of risk sharing, demand subscription transforms the unlimited quantity option into a spectrum of priority service call options, providing consumers choices and risk hedges. Therefore, it facilitates participation in demand-response programs in an efficient manner that fulfills the objectives of price-responsive demand.