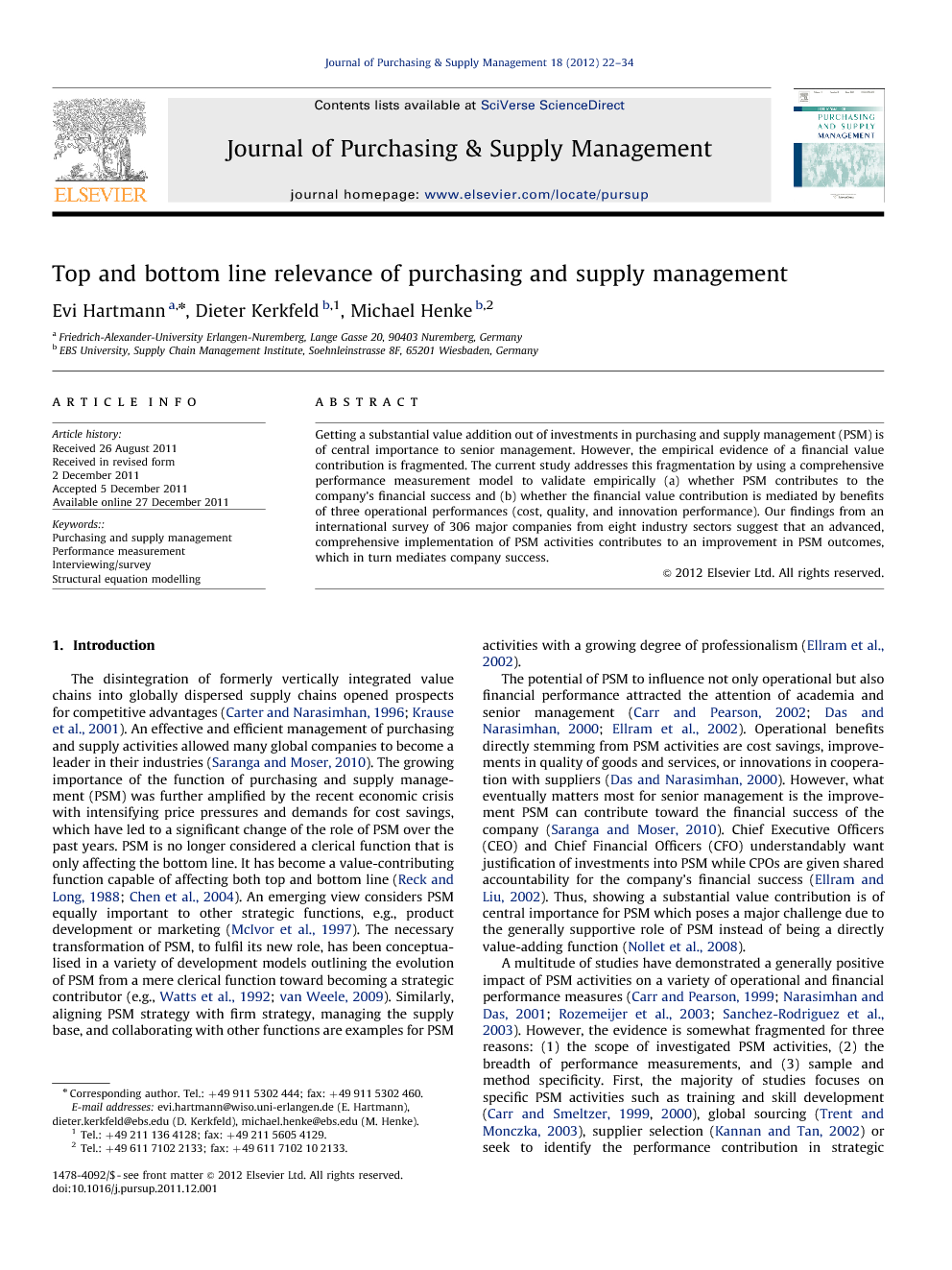 Getting a substantial value addition out of investments in purchasing and supply management (PSM) is of central importance to senior management. However, the empirical evidence of a financial value contribution is fragmented. The current study addresses this fragmentation by using a comprehensive performance measurement model to validate empirically (a) whether PSM contributes to the company's financial success and (b) whether the financial value contribution is mediated by benefits of three operational performances (cost, quality, and innovation performance). Our findings from an international survey of 306 major companies from eight industry sectors suggest that an advanced, comprehensive implementation of PSM activities contributes to an improvement in PSM outcomes, which in turn mediates company success.

The disintegration of formerly vertically integrated value chains into globally dispersed supply chains opened prospects for competitive advantages (Carter and Narasimhan, 1996 and Krause et al., 2001). An effective and efficient management of purchasing and supply activities allowed many global companies to become a leader in their industries (Saranga and Moser, 2010). The growing importance of the function of purchasing and supply management (PSM) was further amplified by the recent economic crisis with intensifying price pressures and demands for cost savings, which have led to a significant change of the role of PSM over the past years. PSM is no longer considered a clerical function that is only affecting the bottom line. It has become a value-contributing function capable of affecting both top and bottom line (Reck and Long, 1988 and Chen et al., 2004). An emerging view considers PSM equally important to other strategic functions, e.g., product development or marketing (McIvor et al., 1997). The necessary transformation of PSM, to fulfil its new role, has been conceptualised in a variety of development models outlining the evolution of PSM from a mere clerical function toward becoming a strategic contributor (e.g., Watts et al., 1992 and van Weele, 2009). Similarly, aligning PSM strategy with firm strategy, managing the supply base, and collaborating with other functions are examples for PSM activities with a growing degree of professionalism (Ellram et al., 2002). The potential of PSM to influence not only operational but also financial performance attracted the attention of academia and senior management (Carr and Pearson, 2002, Das and Narasimhan, 2000 and Ellram et al., 2002). Operational benefits directly stemming from PSM activities are cost savings, improvements in quality of goods and services, or innovations in cooperation with suppliers (Das and Narasimhan, 2000). However, what eventually matters most for senior management is the improvement PSM can contribute toward the financial success of the company (Saranga and Moser, 2010). Chief Executive Officers (CEO) and Chief Financial Officers (CFO) understandably want justification of investments into PSM while CPOs are given shared accountability for the company's financial success (Ellram and Liu, 2002). Thus, showing a substantial value contribution is of central importance for PSM which poses a major challenge due to the generally supportive role of PSM instead of being a directly value-adding function (Nollet et al., 2008). A multitude of studies have demonstrated a generally positive impact of PSM activities on a variety of operational and financial performance measures (Carr and Pearson, 1999, Narasimhan and Das, 2001, Rozemeijer et al., 2003 and Sanchez-Rodriguez et al., 2003). However, the evidence is somewhat fragmented for three reasons: (1) the scope of investigated PSM activities, (2) the breadth of performance measurements, and (3) sample and method specificity. First, the majority of studies focuses on specific PSM activities such as training and skill development (Carr and Smeltzer, 1999 and Carr and Smeltzer, 2000), global sourcing (Trent and Monczka, 2003), supplier selection (Kannan and Tan, 2002) or seek to identify the performance contribution in strategic alignment or internal integration (Narasimhan and Das, 2001 and Gonzalez-Benito, 2007). Integration along the supply chain receives particular attention (van der Vaart and van Donk, 2008) with regard to its financial impact. However, investigating single PSM activities limits the explanatory power (Saranga and Moser, 2010). Second, studies that investigate the relationship between PSM activities and company success often link PSM activities directly to general financial performance outcomes, e.g., market share or return on investment (Ellram et al., 2002). This is a research approach that limits the explanatory value of a study because general measures cannot account for the many other factors in the organisation that exert an influence on the financial outcome (van der Vaart and van Donk, 2008). Third, most studies are built on purely perception-based survey data and/or focus on individual countries or industries limiting the generalisability and allowing only for narrow predictions. In summary, empirical research to-date tends to confirm an expected positive relationship between PSM activities and performance improvements while the narrow scopes of the surveys limit the generalisability of the results (Ellram et al., 2002). The current study addresses this gap by applying a comprehensive performance measurement framework for PSM practices in a broad empirical survey combining objective and perception-based data. Specifically, our research objective is to show a value contribution of PSM to operational performance and subsequently the financial success of the company. The remainder of the article is organised as follows: Next, we review relevant literature to define measures for PSM activities and operational as well as financial performance outcomes. In Section 3, we develop the research model and its underlying hypotheses. Section 4 describes the research methodology and analyses the data using structural equation modelling. Section 5 presents the results and explores their implications. In the last section, we close the paper with conclusions, limitations of the study, and direction for future research.

The objective of this study was to take a comprehensive perspective on PSM activities and isolate their positive impact on both operational performance and company success. The research findings support the first four hypotheses confirming that an advanced, comprehensive implementation of PSM activities contributes to an improvement in PSM outcomes, which in turn mediates improvements of financial outcomes. The positive influence was valid jointly for manufacturing as well as for service companies. The simultaneous consideration of three operational performance outcomes as mediators of a PSM financial performance relationship was a novel contribution to academia and the results offered several implications for management practice and research. An additional strength of this essay was the composition of the sample pool. Focusing on a wide spectrum of industries and regions makes the results from this essay more generalisable. Furthermore, the essay combined three data sources, which makes the results less prone to the instrument biases typically occurring in research relying solely on perception-based, self-reported surveys (David et al., 2002). This study entails three limitations that need to be taken into account. First, it relies on the perceptions of key informants to measure operational performance. Although this approach is a common procedure in management research more objective measures would improve the validity of the results. Even so, the combined self-reporting, financial data and interviewer assessment during the interview process minimised common method and interviewee biases. Second, the reliance on single top management key informants may introduce bias into the data (Rozemeijer, 2008). Reverting to multiple informants could produce better quality data (Hogarth, 1978 and Hill, 1982) but limitations arising from the use of single informants can be alleviated by the methodical procedure applied. Third, limitations arise from the cross-sectional design of the study, which cannot fully exclude lag or one-time effects between the implementation of performance drivers and performance outcomes. A longitudinal survey of these performance relationships would help us to gain a better understanding of sequential relationships between the key constructs. Despite these limitations, we believe that this study makes a compelling case toward the benefits of PSM improvements. We took a cross-industry perspective in the study. Looking at industry-specific samples might provide additional insights on the impact of PSM to company success. Finally, the question arises why not all companies have developed a sophisticated level of purchasing maturity since the benefits are apparent. We must consider the possibility that the development models or the expected performance outcomes from increased purchasing maturity are not universal but instead dependent on the specific context of the company (Sila, 2007). Empirical research on potential contextual influences is still rare in the field of PSM research (Ramsay and Croom, 2008). Further inquiries in this direction might improve our understanding of important interrelations in PSM.