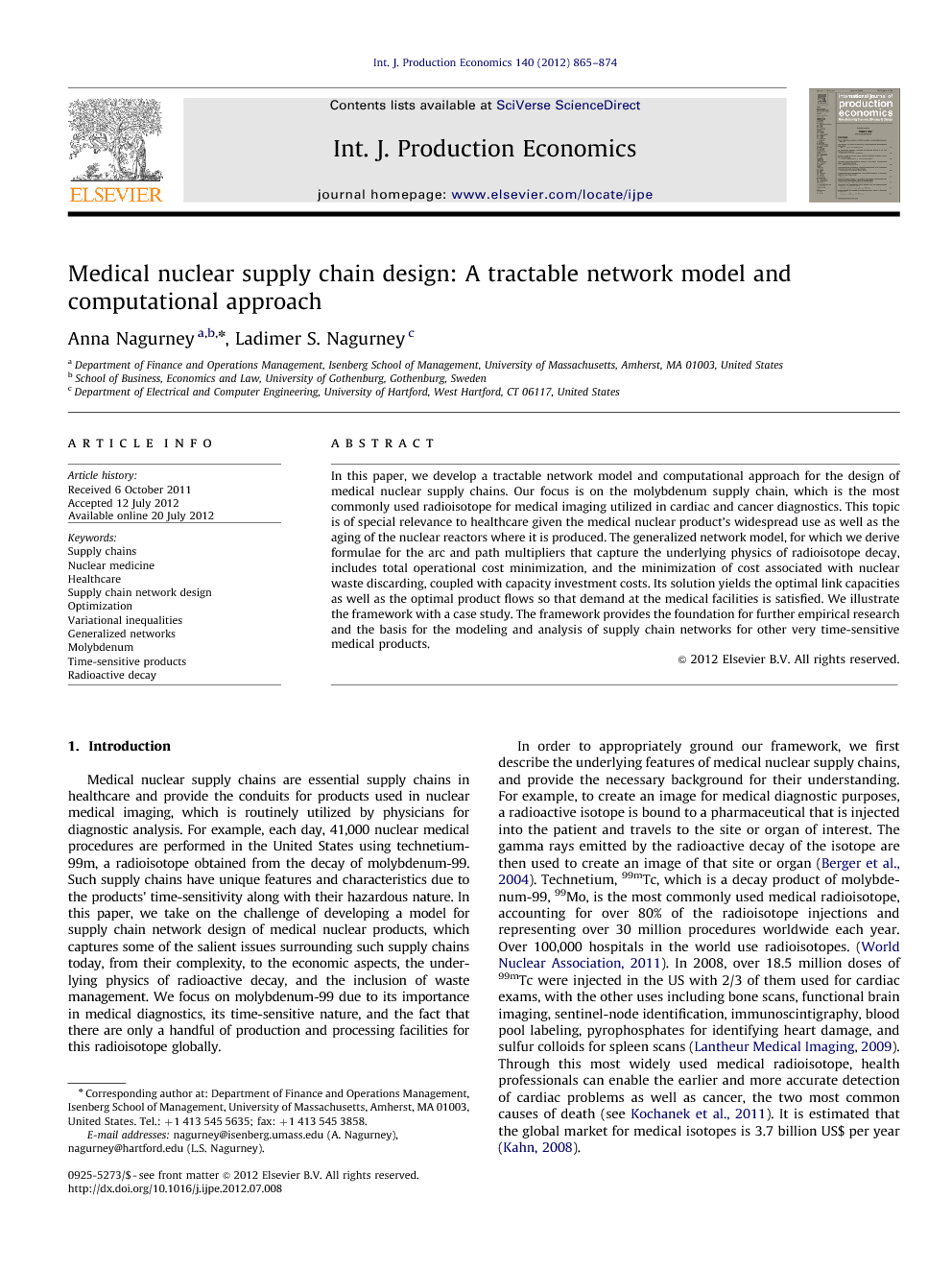 In this paper, we develop a tractable network model and computational approach for the design of medical nuclear supply chains. Our focus is on the molybdenum supply chain, which is the most commonly used radioisotope for medical imaging utilized in cardiac and cancer diagnostics. This topic is of special relevance to healthcare given the medical nuclear product's widespread use as well as the aging of the nuclear reactors where it is produced. The generalized network model, for which we derive formulae for the arc and path multipliers that capture the underlying physics of radioisotope decay, includes total operational cost minimization, and the minimization of cost associated with nuclear waste discarding, coupled with capacity investment costs. Its solution yields the optimal link capacities as well as the optimal product flows so that demand at the medical facilities is satisfied. We illustrate the framework with a case study. The framework provides the foundation for further empirical research and the basis for the modeling and analysis of supply chain networks for other very time-sensitive medical products.

In this paper, we developed a rigorous framework for the design of medical nuclear supply chains. We focused on the most widely used radioisotope, molybdenum, 99Mo, which is used in medical diagnostics for cancer and cardiac problems. Medical nuclear supply chains have numerous challenging features, including the time-sensitivity of the product, which is subject to radioactive decay, the hazardous nature of production and transportation as well as waste disposal. In addition, such radioisotopes are produced globally only in a handful of reactors and the same holds for their processing. Moreover, the nuclear reactors where they are produced are aging and have been subject to failures creating shortages of this critical healthcare product. The specific contributions of the findings in this paper are: (1) A theoretically sound, based on physics principles, methodology to determine the loss, due to time-decay, of the radioisotope on the various links of the supply chain network, through the use of arc multipliers. (2) A generalized network optimization model that includes the relevant criteria associated with link construction, coupled with the operational costs and the associated discarding and waste management costs, subject to demand satisfaction at the patient demand points. (3) A unified framework that can handle the design of the medical nuclear supply chain network from scratch, with specific relevance to the existing economic and engineering situation, coupled with the physics underlying the time-decay of the radioisotope. (4) An algorithm which resolves the new supply chain network design problem into subproblems with elegant features for computation, for which we provide explicit formulae and a generalized exact equilibration algorithm to handle multipliers. We note that the contributions in the paper can serve as the foundation for the investigation of other medical nuclear product supply chains. In addition, the framework can serve as the basis for the exploration of alternative behaviors among the various stakeholders, including competition. Finally, it can be used to assess the vulnerability of medical nuclear supply chains and to explore alternative topologies and the associated costs. Since it has been recognized that some of such supply chains are presently operating without recovering the costs at the reactors, resulting in market failure and a lack of incentive investment, plus that the need for such medical diagnostics is expected to grow with the aging population, we believe that this paper, in emphasizing a new research agenda, has made a valuable contribution.