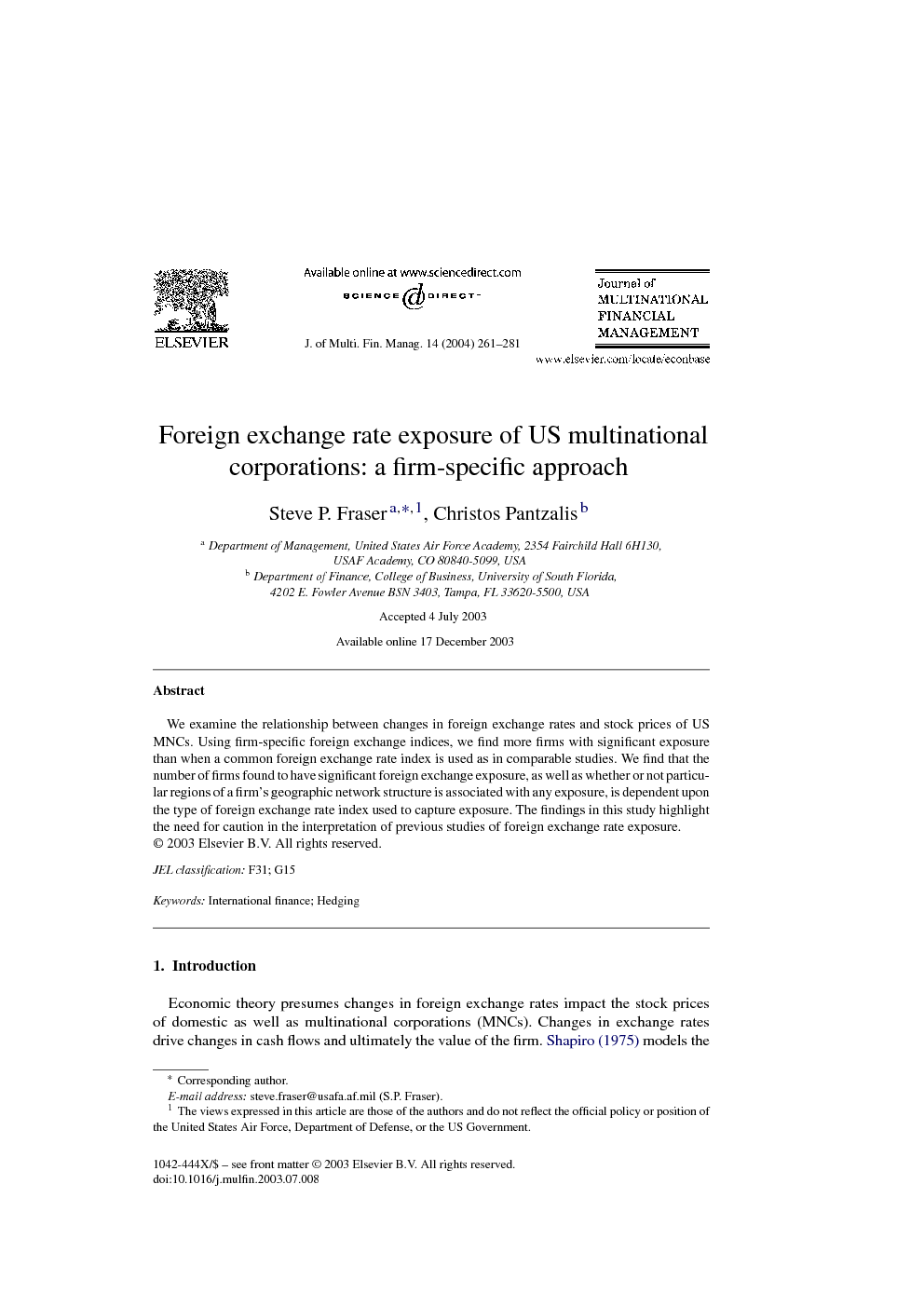 We introduced this study with the simple question as to whether or not the stock returns of US multinational corporations are influenced by changes in foreign exchange rates if we use a more representative, firm-specific exchange rate proxy than the traditional common index variable approach used by many studies. The short answer is yes. Consistent with Ihrig (2001), we find a higher number of firms with significant exposure than when a comparable common index is used. 8.7% (27 out of 310 firms) are found to have significant exposure with a firm-specific index versus 5.5% (17 out of 311 firms) with the common MAJCUR index. However, neither of these measures results in the level of significance when the FRB’s BROAD index is used (12.6% or 39 of the 310 firms). Furthermore, we find evidence that the percentage of a firm’s foreign subsidiaries is positively related to exposure when exposure is measured with a firm-specific index and negatively related to exposure when a common index is used. While the levels of significance appear to increase with firm-specific measures, the results are not drastically different than those found in previous research. It is interesting to note that we examined 310 firms using four different foreign exchange measures and only three firms, or less than 1% of the sample, were found to have significant exposure across all measures. The longer answer to our question involves interpreting the stark differences in results of studying the determinants of exposure depending on which measure of foreign exchange (common or firm-specific) is used. For instance, we find that the number of foreign subsidiaries is associated with reduced exposure when a firm-specific measure is used while the opposite is true when the common BROAD index is used. Similarly, when we examine the relationship between geographic network variables and exposure, the results are equally puzzling. Using exposures derived from models relying on firm-specific measures of foreign exchange rates, our results suggest that a firm operating in Central America is more exposed and one that operates in the Asian crises region is less exposed. Conversely, using exposures derived from models relying on common foreign exchange indices, the results suggest that firms operating in the Asian crisis region are more exposed. The primary difference between any of the indices is the specific currencies included and their respective weights. Certainly, the inclusion (or exclusion) of individual currencies that compose the indices is a factor in the determinants of exposure studied here. When more currencies are included in an index, whether or not the firm even operates in a particular currency’s home country, we obtain more firms with significant exposure. This constitutes indirect evidence in support of the notion that all firms may be subject to foreign exchange exposure, not just those operating in foreign countries. Alternatively, this may indicate that firms are exposed to currencies of countries where they are not operating since, for example, some of their competitors may be incorporated in these countries, or because some of their inputs to production may be denominated in those currencies. The impact of these findings is significant for researchers and managers alike. First, if managers utilize such measures to determine the need and degree of hedging activity, our findings imply the selection of the foreign exchange rate measure significantly impacts the resulting exposure to the extent it may even suggest different currencies or regions to hedge. For researchers, our results suggest we should be cautious in our interpretation of pervious studies. From the analysis of the determinants of exposure studied here, it is not clear that the operation of a network of foreign subsidiaries increases or decreases exposure. Clearly, the selection of a foreign exchange variable is critical in any analysis of foreign exchange exposure, and more so in the generalization of results across all firms.