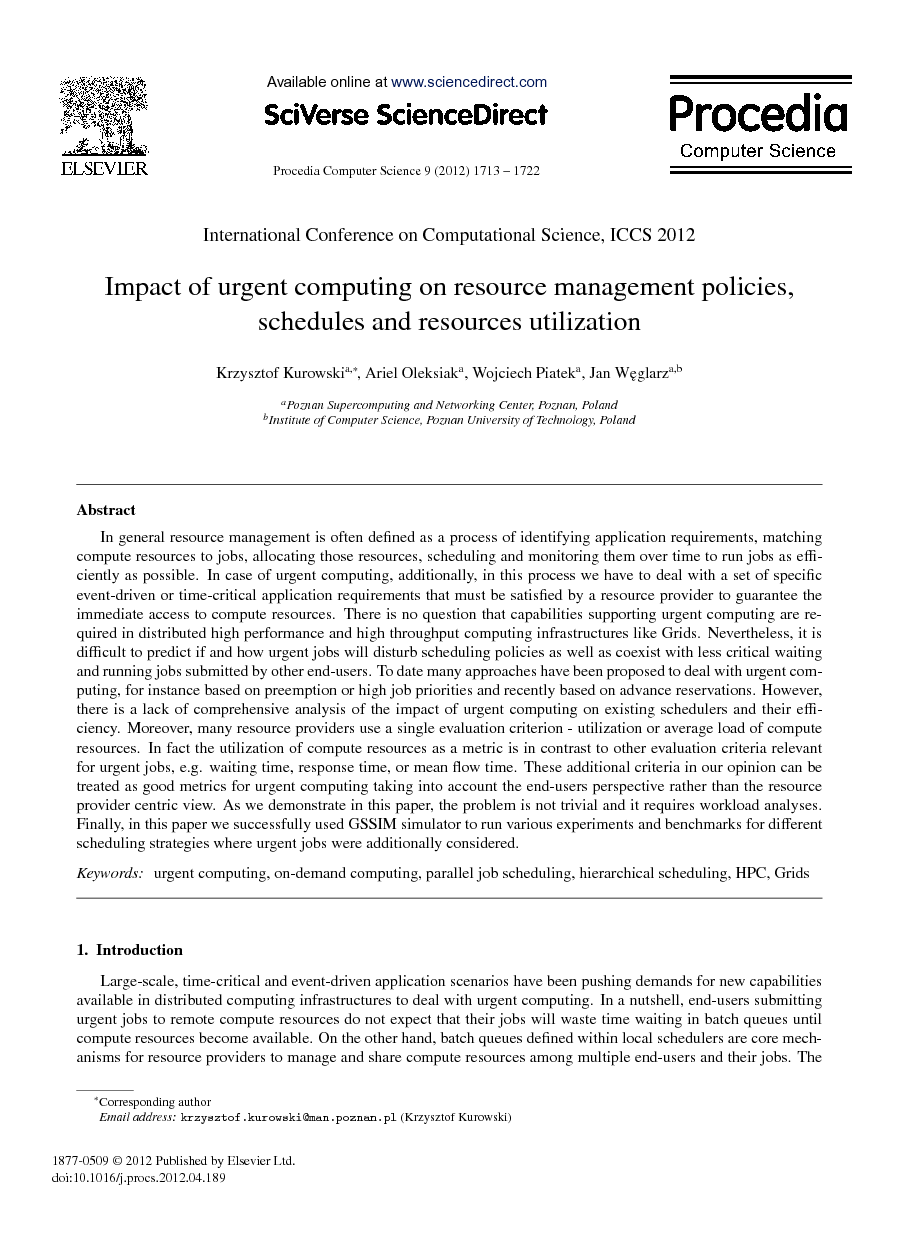 In general resource management is often defined as a process of identifying application requirements, matching compute resources to jobs, allocating those resources, scheduling and monitoring them over time to run jobs as effi-ciently as possible. In case of urgent computing, additionally, in this process we have to deal with a set of specific event-driven or time-critical application requirements that must be satisfied by a resource provider to guarantee the immediate access to compute resources. There is no question that capabilities supporting urgent computing are re-quired in distributed high performance and high throughput computing infrastructures like Grids. Nevertheless, it is difficult to predict if and how urgent jobs will disturb scheduling policies as well as coexist with less critical waiting and running jobs submitted by other end-users. To date many approaches have been proposed to deal with urgent com-puting, for instance based on preemption or high job priorities and recently based on advance reservations. However, there is a lack of comprehensive analysis of the impact of urgent computing on existing schedulers and their effi-ciency. Moreover, many resource providers use a single evaluation criterion -utilization or average load of compute resources. In fact the utilization of compute resources as a metric is in contrast to other evaluation criteria relevant for urgent jobs, e.g. waiting time, response time, or mean fiow time. These additional criteria in our opinion can be treated as good metrics for urgent computing taking into account the end-users perspective rather than the resource provider centric view. As we demonstrate in this paper, the problem is not trivial and it requires workload analyses. Finally, in this paper we successfully used GSSIM simulator to run various experiments and benchmarks for different scheduling strategies where urgent jobs were additionally considered.

Large-scale, time-critical and event-driven application scenarios have been pushing demands for new capabilities available in distributed computing infrastructures to deal with urgent computing. In a nutshell, end-users submitting urgent jobs to remote compute resources do not expect that their jobs will waste time waiting in batch queues until compute resources become available. On the other hand, batch queues defined within local schedulers are core mechanisms for resource providers to manage and share compute resources among multiple end-users and their jobs. Theproblem is even more challenging in Grids linking together large collections of geographically distributed resource providers that usually span several organizations to share a variety of resources dynamically, depending on their availability, capability, end-users requirements, and any other predefined rules set by local resources owners. Thus, such computing environments could consist of independent resource providers, where each of them may imply different resource management policies and rules for responding to urgent computation. One should also note that most of Grids are organized hierarchically - that is, there is at least one grid scheduler or broker assigning jobs to a local schedulers without being able to fully control what happens next at the local level within a local scheduler. Taking into account the complexity of a two-level hierarchical structure of schedulers together with variety of grid middleware as well as constraints based on resources utilization, different levels of requested urgencies, end-users behavior and acceptance it is difficult or even impossible to come up with one unified resource management strategy for urgent computing.

For the broad range of developing and transition countries, exchange rates are typically very important macroeconomic variables and increasingly so because of the trends toward greater involvement of these countries in the global economic system. Reflecting wide differences in levels of economic and financial development and in other aspects of their economic situations, no single exchange rate regime is most appropriate for all of these countries, and the regime that is appropriate for a particular country may change over time.21 Despite the diversity of possible arrangements, however, the following general conclusions can be stated. First, for most emerging market countries, primarily in Asia and Latin America (but also some in Eastern Europe and South Africa), floating exchange rate regimes appear to be the increasingly relevant choice. For these emerging market countries, the tequila crisis of 1995 and the Asian–Russian–Brazilian crises of 1997–98 forcefully illustrated what was demonstrated for the industrial countries in the ERM crises of 1992–93—that the policy requirements for maintaining a pegged exchange rate can be very demanding in circumstances of high international capital mobility. In this situation, several emerging market countries (including Mexico, Peru, and South Africa) successfully maintained floating exchange rate regimes. This provides evidence that floating rates are often the most workable regimes for many emerging market countries. Second, for certain emerging market countries, pegged exchange rate regimes and their required supporting policies and institutions can be workable, despite substantial involvement with global financial markets. Notable in this category are countries that have already put in place the policies and institutions needed to support a pegged exchange rate, have established the credibility of those policies and institutions, and have induced appropriate behavior of the economic and financial system to the characteristics of the regime. For such countries, in general, the harder and more credible the peg, the better. In contrast, a pegged exchange rate regime that is adopted (de jure or de facto) when conditions are favorable, but without adequate policy commitment and institutional foundations, can become aninvitation to costly crisis when conditions turn less favorable. An environment of capital mobility allows massive pressures to be exerted against a pegged exchange that, for whatever reasons, has become suspect in the market. To defend the peg, monetary policy must be able to respond forcefully, and the economy and financial system must be able to withstand the strain if the regime is to be credible. And, even for countries with strong foundations, maintenance of pegged exchange rates in a crisis environment can be a demanding endeavor. Third, beyond the 30 or so emerging market economies, the majority of developing and transition economies do not have highly sophisticated domestic financial systems, are not deeply integrated into world capital markets, and (in many cases) maintain fairly extensive controls on capital account (and current account) transactions. These countries presently include a number of the larger and mid-sized developing countries. If inflation in these countries is high because of needs for monetary finance of the fiscal deficit or for other reasons, then exchange rate pegs cannot be sustained for long periods. However, if monetary policy can maintain reasonable discipline, then pegged exchange rate regimes (or bands, crawling pegs, or crawling bands) can on the contrary be viable and, if adjustments are undertaken in a timely manner, they need not be associated with costly crises. Nevertheless, as they become more developed, more financially sophisticated, and more integrated into global financial markets, these countries also will need to consider regimes of greater exchange rate flexibility. Also in the group of peggers are many smaller countries that account for only a modest share of world output but are a substantial fraction of the countries in the world. Even for the most advanced of these small countries that want to maintain pegged exchange rates, moderate constraint on the development of financial instruments and practices that might facilitate speculation against the peg can probably help, along with disciplined monetary policy, to sustain the exchange rate regime. Moreover, for the many small countries that do maintain pegged exchange rates, the currencies to which they peg generally have a sensible and clearly understandable rationale. Finally, another group of countries for which pegged exchange rates offer important attractions are countries that need to stabilize from situations of high inflation. The main challenge in these endeavors is to recognize that while an exchange rate peg may initially be very useful in the stabilization effort, the exchange rate peg (or crawling peg or band) may not be sustainable in the longer term. Thus, it is very important to know when, and under what circumstances, it may be appropriate to move away from a peg to forestall risks of a major future crisis. This is the issue of exit from an exchange rate peg that was discussed intensively in Eichengreen et al. (1998).