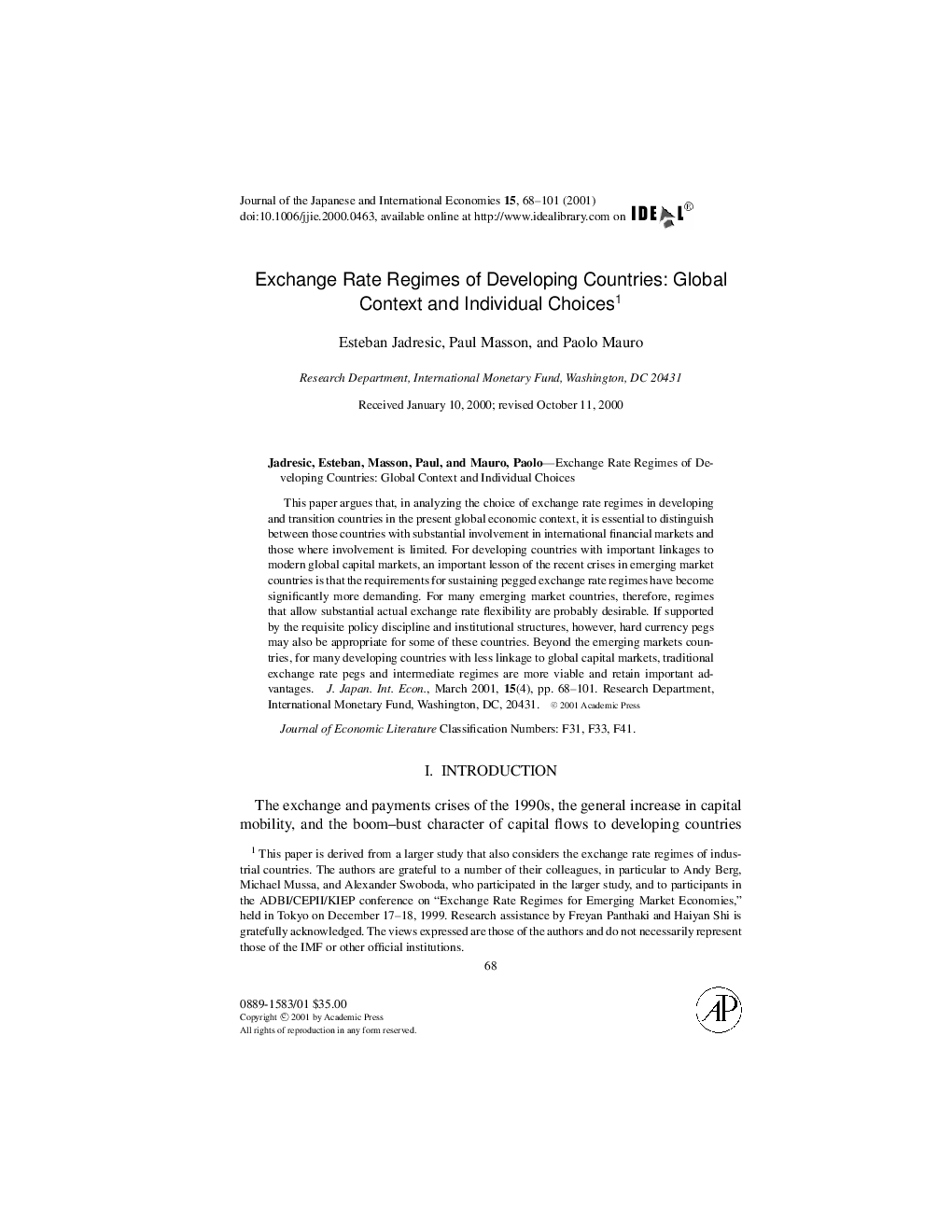 This paper argues that, in analyzing the choice of exchange rate regimes in developing and transition countries in the present global economic context, it is essential to distinguish between those countries with substantial involvement in international financial markets and those where involvement is limited. For developing countries with important linkages to modern global capital markets, an important lesson of the recent crises in emerging market countries is that the requirements for sustaining pegged exchange rate regimes have become significantly more demanding. For many emerging market countries, therefore, regimes that allow substantial actual exchange rate flexibility are probably desirable. If supported by the requisite policy discipline and institutional structures, however, hard currency pegs may also be appropriate for some of these countries. Beyond the emerging markets countries, for many developing countries with less linkage to global capital markets, traditionalexchange rate pegs and intermediate regimes are more viable and retain important advantages. J. Japan. Int. Econ., March 2001, 15(1), pp. 68–101. Research Department, International Monetary Fund, Washington, DC, 20431. Copyright 2001 Academic Press.

The exchange and payments crises of the 1990s, the general increase in capital mobility, and the boom–bust character of capital flows to developing countries 1 This paper is derived from a larger study that also considers the exchange rate regimes of industrial countries. The authors are grateful to a number of their colleagues, in particular to Andy Berg, Michael Mussa, and Alexander Swoboda, who participated in the larger study, and to participants in the ADBI/CEPII/KIEP conference on “Exchange Rate Regimes for Emerging Market Economies,”held in Tokyo on December 17–18, 1999. Research assistance by Freyan Panthaki and Haiyan Shi is gratefully acknowledged. The views expressed are those of the authors and do not necessarily represent those of the IMF or other official institutions.

For the broad range of developing and transition countries, exchange rates are typically very important macroeconomic variables and increasingly so because of the trends toward greater involvement of these countries in the global economic system. Reflecting wide differences in levels of economic and financial development and in other aspects of their economic situations, no single exchange rate regime is most appropriate for all of these countries, and the regime that is appropriate for a particular country may change over time.21 Despite the diversity of possible arrangements, however, the following general conclusions can be stated. First, for most emerging market countries, primarily in Asia and Latin America (but also some in Eastern Europe and South Africa), floating exchange rate regimes appear to be the increasingly relevant choice. For these emerging market countries, the tequila crisis of 1995 and the Asian–Russian–Brazilian crises of 1997–98 forcefully illustrated what was demonstrated for the industrial countries in the ERM crises of 1992–93—that the policy requirements for maintaining a pegged exchange rate can be very demanding in circumstances of high international capital mobility. In this situation, several emerging market countries (including Mexico, Peru, and South Africa) successfully maintained floating exchange rate regimes. This provides evidence that floating rates are often the most workable regimes for many emerging market countries. Second, for certain emerging market countries, pegged exchange rate regimes and their required supporting policies and institutions can be workable, despite substantial involvement with global financial markets. Notable in this category are countries that have already put in place the policies and institutions needed to support a pegged exchange rate, have established the credibility of those policies and institutions, and have induced appropriate behavior of the economic and financial system to the characteristics of the regime. For such countries, in general, the harder and more credible the peg, the better. In contrast, a pegged exchange rate regime that is adopted (de jure or de facto) when conditions are favorable, but without adequate policy commitment and institutional foundations, can become aninvitation to costly crisis when conditions turn less favorable. An environment of capital mobility allows massive pressures to be exerted against a pegged exchange that, for whatever reasons, has become suspect in the market. To defend the peg, monetary policy must be able to respond forcefully, and the economy and financial system must be able to withstand the strain if the regime is to be credible. And, even for countries with strong foundations, maintenance of pegged exchange rates in a crisis environment can be a demanding endeavor. Third, beyond the 30 or so emerging market economies, the majority of developing and transition economies do not have highly sophisticated domestic financial systems, are not deeply integrated into world capital markets, and (in many cases) maintain fairly extensive controls on capital account (and current account) transactions. These countries presently include a number of the larger and mid-sized developing countries. If inflation in these countries is high because of needs for monetary finance of the fiscal deficit or for other reasons, then exchange rate pegs cannot be sustained for long periods. However, if monetary policy can maintain reasonable discipline, then pegged exchange rate regimes (or bands, crawling pegs, or crawling bands) can on the contrary be viable and, if adjustments are undertaken in a timely manner, they need not be associated with costly crises. Nevertheless, as they become more developed, more financially sophisticated, and more integrated into global financial markets, these countries also will need to consider regimes of greater exchange rate flexibility. Also in the group of peggers are many smaller countries that account for only a modest share of world output but are a substantial fraction of the countries in the world. Even for the most advanced of these small countries that want to maintain pegged exchange rates, moderate constraint on the development of financial instruments and practices that might facilitate speculation against the peg can probably help, along with disciplined monetary policy, to sustain the exchange rate regime. Moreover, for the many small countries that do maintain pegged exchange rates, the currencies to which they peg generally have a sensible and clearly understandable rationale. Finally, another group of countries for which pegged exchange rates offer important attractions are countries that need to stabilize from situations of high inflation. The main challenge in these endeavors is to recognize that while an exchange rate peg may initially be very useful in the stabilization effort, the exchange rate peg (or crawling peg or band) may not be sustainable in the longer term. Thus, it is very important to know when, and under what circumstances, it may be appropriate to move away from a peg to forestall risks of a major future crisis. This is the issue of exit from an exchange rate peg that was discussed intensively in Eichengreen et al. (1998).