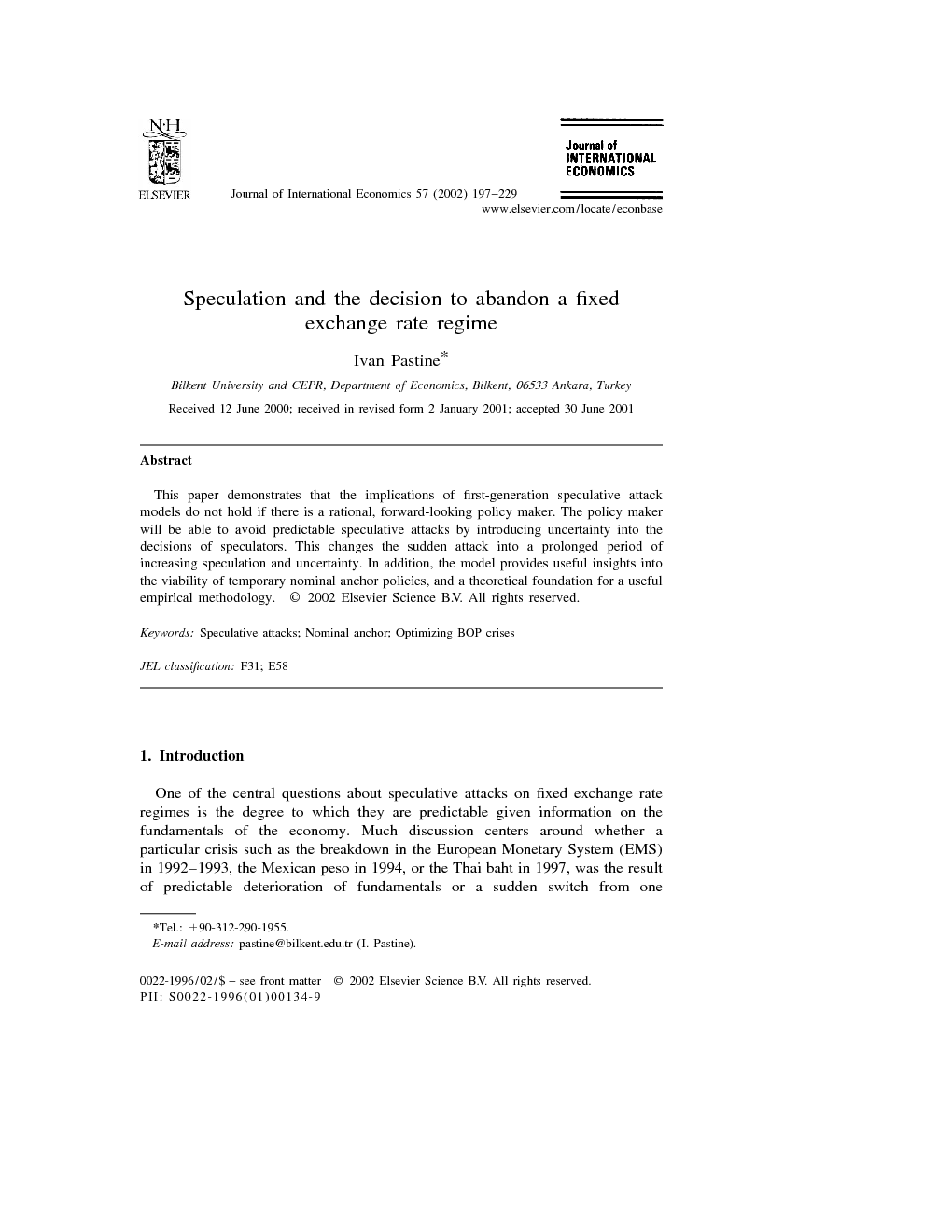 This paper demonstrates that the implications of first-generation speculative attack models do not hold if there is a rational, forward-looking policy maker. The policy maker will be able to avoid predictable speculative attacks by introducing uncertainty into the decisions of speculators. This changes the sudden attack into a prolonged period of increasing speculation and uncertainty. In addition, the model provides useful insights into the viability of temporary nominal anchor policies, and a theoretical foundation for a useful empirical methodology.

One of the central questions about speculative attacks on fixed exchange rate regimes is the degree to which they are predictable given information on the fundamentals of the economy. Much discussion centers around whether a particular crisis such as the breakdown in the European Monetary System (EMS) in 1992–1993, the Mexican peso in 1994, or the Thai baht in 1997, was the result of predictable deterioration of fundamentals or a sudden switch from one equilibrium to another based on self-fulfilling expectations. The question is theoretically interesting, and of central practical importance. If most attacks are due to predictable movements in fundamentals (first-generation models) then fixed exchange rates may be attractive as long as the monetary authority is willing to subordinate its other goals to the exchange rate policy. On the other hand, if self-fulfilling expectations of crises (second generation models) are common then even if the monetary authority does everything right it may still not be able to avoid a speculative attack. Both types of attacks are supported by extensive theoretical literatures so economists have had to address the very difficult task of trying to differentiate these views empirically.1 This paper reexamines the possibility of predictable speculative attacks. It argues that if monetary authorities are not myopic it is unlikely that predictable movements in fundamentals can create predictable speculative attacks. Once a rational, forward-looking policy maker is incorporated in these models very different, but equally interesting conclusions arise. This literature grew from a framework developed by Krugman (1979) based on a mechanism by Salant and Henderson (1978). This framework posits a central bank with limited resources which is pursuing a fixed exchange rate policy but also has other, higher priority, policies that are fundamentally inconsistent with the exchange rate policy in the long run. Speculators are forward looking. They foresee the eventual abandonment of the fixed rate regime and the potential profit opportunities that might occur. As soon as profit opportunities begin to manifest themselves they attempt to exploit them by buying the central bank’s foreign currency reserves in a sudden attack, forcing the early abandonment of the fixed exchange rate regime. This structure is intuitive, elegant, and empirically tractable. Moreover, many countries which have experienced foreign exchange crises do indeed seem to have been pursuing other policies which appear to have been at odds with the fixed exchange rate system. Therefore the basic structure is quite attractive, and it has fared well empirically. It suffers, however, from an important shortcoming. In these models speculators are rational, forward-looking agents who are able to foresee the inevitable collapse of the fixed exchange rate regime, whereas the monetary authority is not. Even if we assume that the policy maker makes maintaining the fixed exchange rate regime a high priority, it would still realize that indefinite maintenance is impossible given its other objectives. It would therefore take steps to minimize the costs associated with the inevitable collapse of the fixed exchange rate system. It is not clear that the results of these models are robust to the inclusion of an optimizing policy maker. If the structure is extended to allow for a forward-looking, rational policy maker then strategic interaction between speculators and the monetary authority becomes critical to the analysis. Since the policy maker would foresee the speculative attack, it would be tempted to abandon the fixed exchange rate just before the crisis, thereby avoiding large reserve losses. However, if it was optimal for the policy maker to do so, rational speculators would take this into account and change their strategies, potentially altering the date or nature of the attack. I examine this issue, analyzing strategic interaction between speculators and an optimizing policy maker in a linear version of the Krugman model developed by Flood and Garber (1984b). There are five reasons why it may be useful to do so.