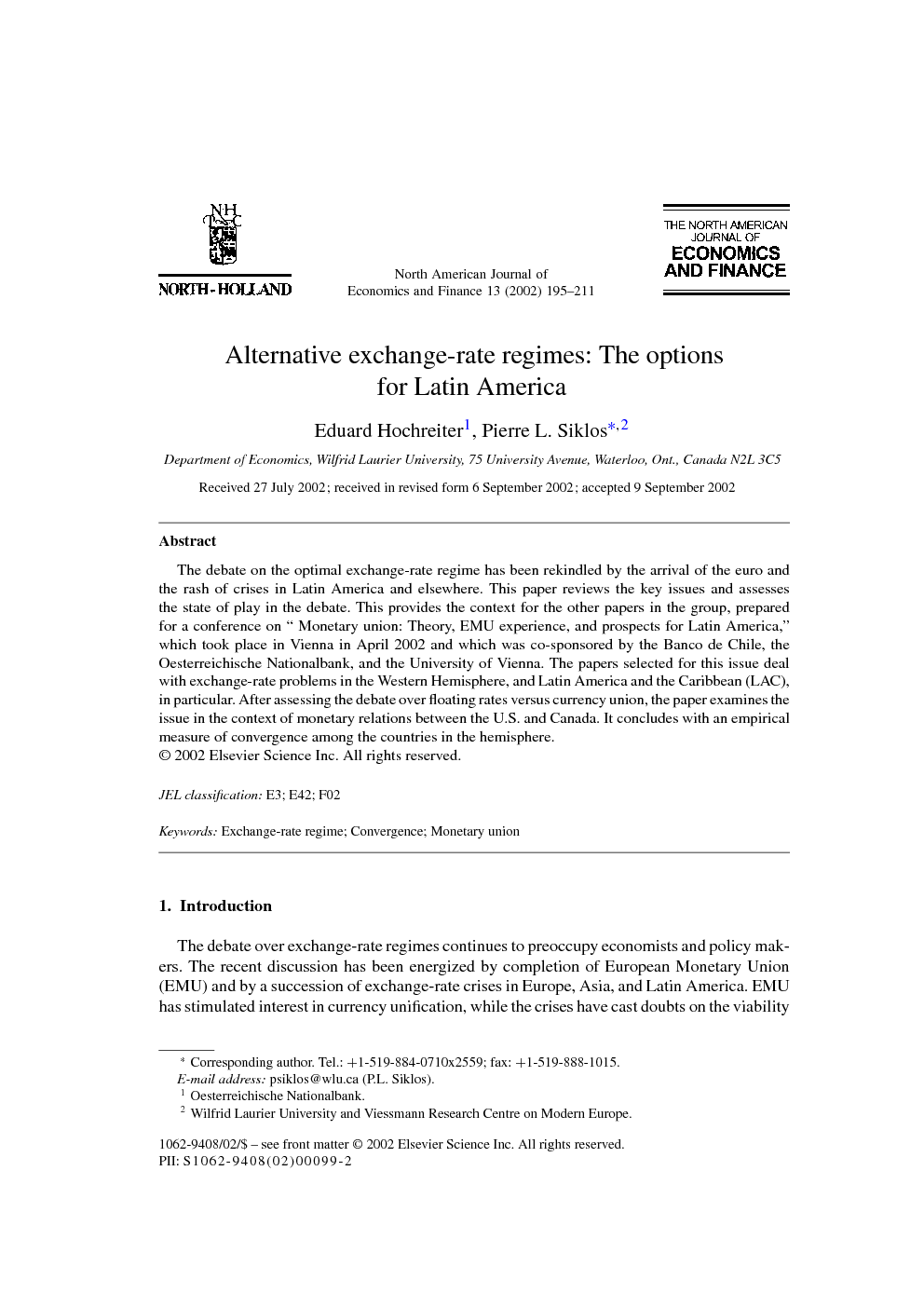 The debate on the optimal exchange-rate regime has been rekindled by the arrival of the euro and the rash of crises in Latin America and elsewhere. This paper reviews the key issues and assesses the state of play in the debate. This provides the context for the other papers in the group, prepared for a conference on “ Monetary union: Theory, EMU experience, and prospects for Latin America,” which took place in Vienna in April 2002 and which was co-sponsored by the Banco de Chile, the Oesterreichische Nationalbank, and the University of Vienna. The papers selected for this issue deal with exchange-rate problems in the Western Hemisphere, and Latin America and the Caribbean (LAC), in particular. After assessing the debate over floating rates versus currency union, the paper examines the issue in the context of monetary relations between the U.S. and Canada. It concludes with an empirical measure of convergence among the countries in the hemisphere.

The debate over exchange-rate regimes continues to preoccupy economists and policy makers. The recent discussion has been energized by completion of European Monetary Union (EMU) and by a succession of exchange-rate crises in Europe, Asia, and Latin America. EMU has stimulated interest in currency unification, while the crises have cast doubts on the viability of the so-called soft pegs. The collapse of the relatively rigid fixed-rate regime in Argentina has now spread those doubts to the hard pegs. Both developments contribute to the further hollowing-out of the middle of the spectrum of exchange-rate regimes and add to the popularity of the “bipolar view” of corner solutions, according to which the extremes of the hard peg and the freely floating exchange rate appear to be the only viable options.1 The problem, however, is far more complicated than simply choosing between flexible and rigidly fixed rates. To be fully viable, for instance, floating rates need to be accompanied by appropriate monetary policy rules, among which inflation targeting has been a recent favorite among both developed and developing countries. Among emerging economies, systemic weaknesses and lack of monetary policy credibility have given rise to the “fear-of-floating” syndrome, in which excessive exchange-market intervention destabilizes the arrangement.2 When it comes to fixed exchange rates, there is broad agreement that few, if any, Latin American countries currently satisfy the basic requirements for a workable currency area. However, failure to satisfy static optimum currency area (OCA) criteria is not sufficient to rule out monetary harmonization and cooperation. New insights from the theory of self-validating or endogenous currency areas suggest that forward-looking monetary cooperation may over time bring about the changes needed to satisfy OCA criteria. The trick is how to create the dynamics that will generate such an outcome? The answer involves complex issues pertaining to the nature and sequencing of policy coordination in trade, finance, and monetary policy. The European approach to currency union provides one example, involving a multi-decade process beginning with trade liberalization, followed by market integration, harmonization of standards, and creation of institutional and legal structures and an extended period of policy harmonization, before the final step of monetary unification. This may not be the right model for Latin America, where many of the conditions that existed when Europe embarked on its grand enterprise, do not obtain. In Latin America, the initial question is much more one of optimal sequencing, of deciding whether monetary cooperation or market integration might usefully be attempted first. The key concern is to identify the most promising catalyst, the cooperative effort that would be best at jump-starting the process of economic, financial and monetary integration. While the full implications of recent exchange-market crises are still being distilled by economists and policy makers, an obvious early lesson is that no regime will survive if the rules that make it work are systematically violated. It has long been understood that violation of the rules governing monetary policy will bring down a soft peg. Now, Argentina has demonstrated that violation of the rules governing fiscal policy will bring down a hard peg. Hard pegs were popular in part because it was believed that this was the most visible means of signaling adherence to a rule that would ensure macroeconomic stability. Argentina has shown otherwise, as Edwards details below. A second, and equally important, lesson, however, is that a system can be too rigid in the context of underlying structures, institutions and macroeconomic tendencies and in the nature of disturbances. Kopits stresses the importance of institutions and policies and Hochreiter, Schmidt-Hebbel and Winckler examine the implications of fiscal versus monetary policy dominance. Argentina may have ignored both lessons. It is clear that decisions were made at both public and private levels that ignored the principle embodied in the first lesson, but it is equally clear that Argentina’s version of a currency board was, in the end, incompatible with the realities of the country’s past, its contemporary politics, and the nature of its markets and institutions. The rest of this introductory overview is organized as follows. Section 2 assesses the debate on the pre-conditions for an OCA. Section 3 examines the Maastricht Treaty as a model for Latin America and the Caribbean (LAC). Section 4 concludes.

The successful launch of a single currency in Europe has prompted policy makers elsewhere in the world to ask whether some form of monetary integration might deliver macroeconomic and microeconomic benefits relative to alternative currency regimes. There is wide agreement, as the papers in this issue explain, that the countries of the region do not at present satisfy the economic criteria for currency unification. Furthermore, evidence provided in this paper suggests that inspite of convergence in some respects—notably inflation, the economic distance separating countries in the region militates against monetary union. As Europe has repeatedly demonstrated, economic integration requires political will and commitment. The self-imposed policy constraints manifest in the Maastricht Treaty and the Stability Pact are a useful reminder. Such political will and the institutional restraints that reinforce it appear to be absent in the Western Hemisphere at present. This does not mean that the status quo is the preferred solution, but rather that the long-run goal of monetary union must be facilitated by increasing policy coordination and harmonization.