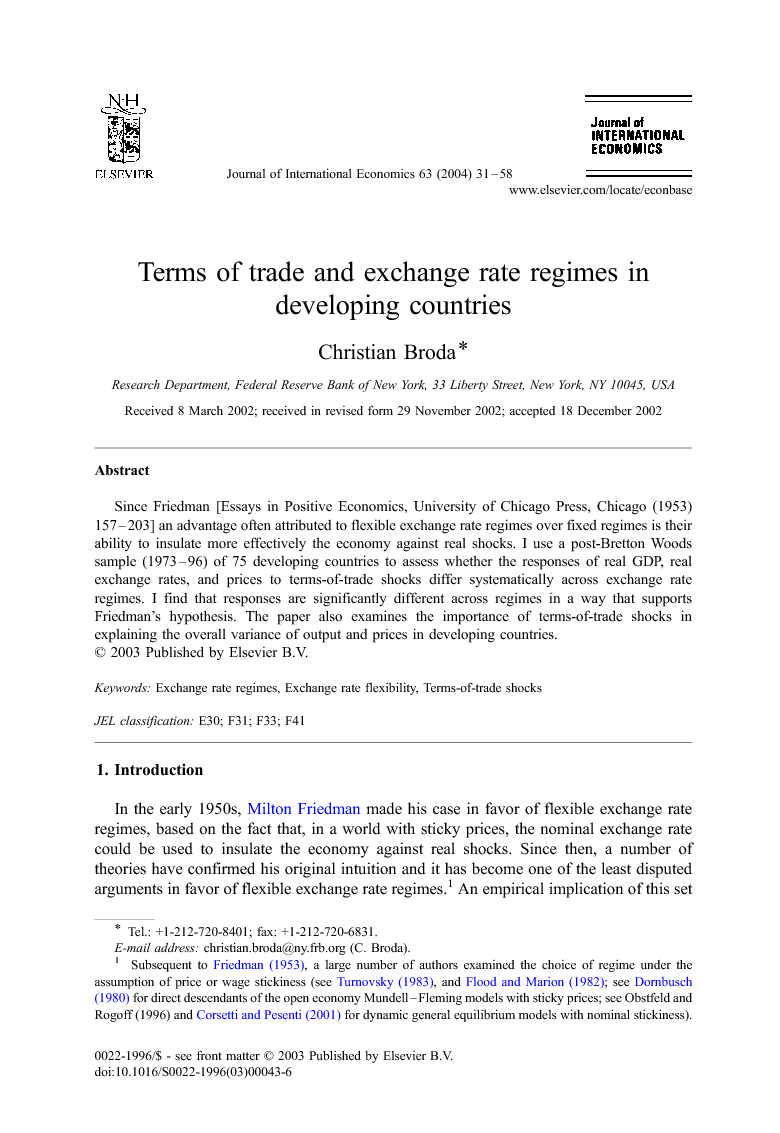 Since Friedman [Essays in Positive Economics, University of Chicago Press, Chicago (1953) 157–203] an advantage often attributed to flexible exchange rate regimes over fixed regimes is their ability to insulate more effectively the economy against real shocks. I use a post-Bretton Woods sample (1973–96) of 75 developing countries to assess whether the responses of real GDP, real exchange rates, and prices to terms-of-trade shocks differ systematically across exchange rate regimes. I find that responses are significantly different across regimes in a way that supports Friedman’s hypothesis. The paper also examines the importance of terms-of-trade shocks in explaining the overall variance of output and prices in developing countries.

The fixed versus flexible debate remains highly contentious. In the search for clearer answers, the theoretical arguments involved ought to be tested and quantified. The main contribution of this paper is to isolate one specific type of real shock, the terms of trade of a country, and examine how countries with different regimes cope with this shock. Thus, the paper is able to scrutinize Friedman’s hypothesis and identify significant differences in the responses to terms-of-trade shocks across exchange rate regimes. The paper presents substantial evidence in favor of Friedman’s predictions that short-run real GDP responses to real shocks are significantly smoother in floats than in pegs. Furthermore, the real exchange rate response is consistent with the assertion that the exchange rate regime plays a key role in explaining the different observed real GDP responses. In response to a fall in the terms of trade, the small and slow real depreciation observed in pegs is due to the fall in domestic prices while the large and immediate real depreciation in floats reflects a large nominal depreciation. This pattern is present in all of the time periods and regions examined, though it is most pronounced in the 1980s and in Africa. The paper also finds that responses are symmetric to shocks of different signs in pegs and assymetric in floats. After a negative shock, countries with flexible exchange rate regimes have larger real exchange rate changes and smaller real GDP changes than after positive shocks. Terms-of-trade disturbances are found to explain 30% of real GDP fluctuations in fixed regimes and approximately 30% of real exchange rate fluctuations in countries with flexible regimes.