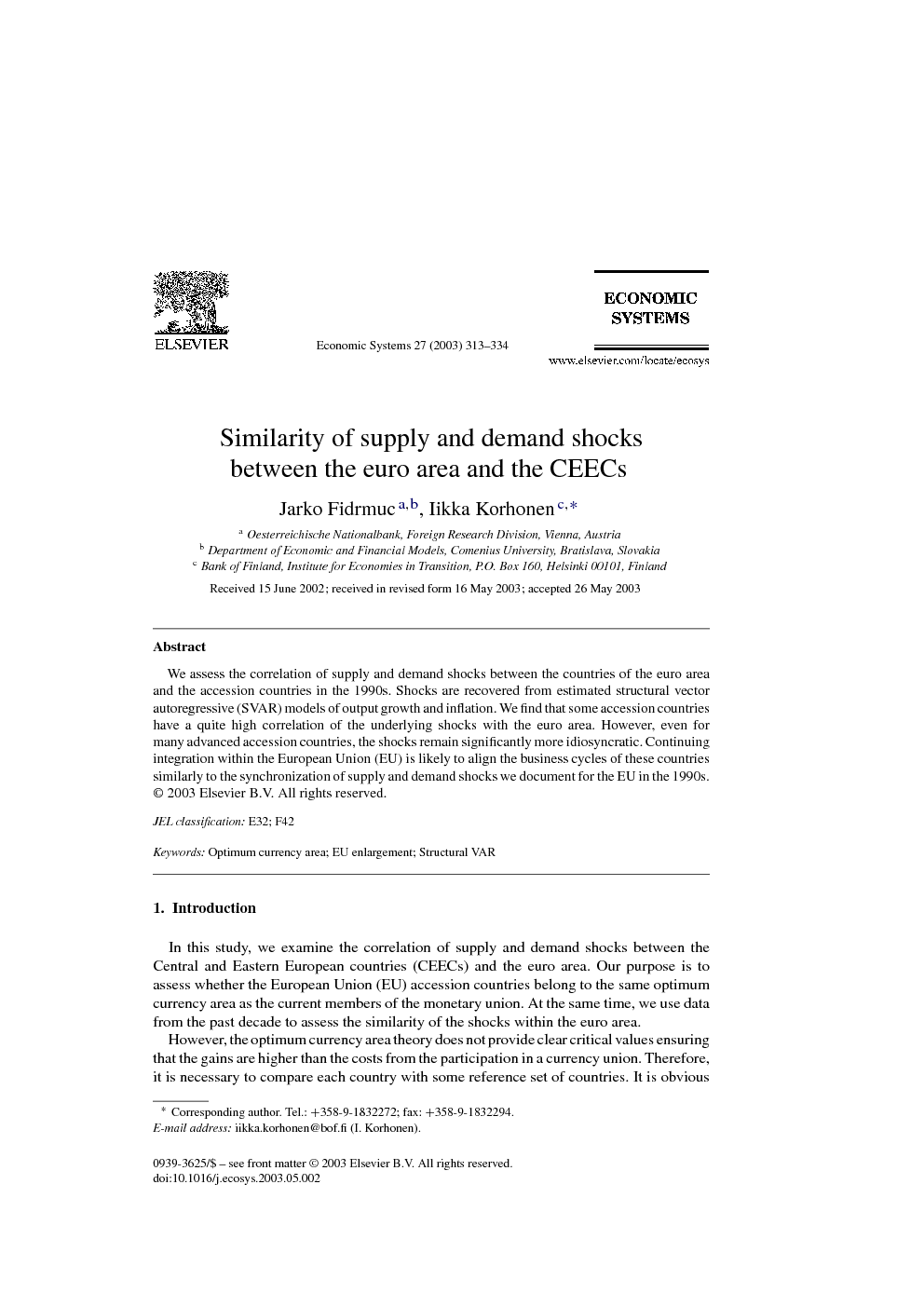 We assess the correlation of supply and demand shocks between the countries of the euro area and the accession countries in the 1990s. Shocks are recovered from estimated structural vector autoregressive (SVAR) models of output growth and inflation. We find that some accession countries have a quite high correlation of the underlying shocks with the euro area. However, even for many advanced accession countries, the shocks remain significantly more idiosyncratic. Continuing integration within the European Union (EU) is likely to align the business cycles of these countries similarly to the synchronization of supply and demand shocks we document for the EU in the 1990s.

In this study, we examine the correlation of supply and demand shocks between the Central and Eastern European countries (CEECs) and the euro area. Our purpose is to assess whether the European Union (EU) accession countries belong to the same optimum currency area as the current members of the monetary union. At the same time, we use data from the past decade to assess the similarity of the shocks within the euro area. However, the optimum currency area theory does not provide clear critical values ensuring that the gains are higher than the costs from the participation in a currency union. Therefore, it is necessary to compare each country with some reference set of countries. It is obvious to compare potential members of a currency union with earlier currency unions (e.g. USA) or more recently with the member states of the Economic and Monetary Union (EMU). We follow the latter approach in our paper. Moreover, we compare the correlation of supply and demand shocks in the perspective new members of the EU/EMU also with the non-European OECD countries. We show that the inclusion of a broader set of reference countries is important for the interpretation of the results. In practice, the supply and demand shocks are recovered from two-variable (output and inflation) vector autoregressive (VAR) models with the help of the decomposition developed by Blanchard and Quah (1989). The different shocks are identified from the VAR residuals with the help of the restriction that demand shocks cannot have a permanent effect on output. The same procedure has been used before to assess whether the current European monetary union constitutes an optimum currency area, e.g. by Bayoumi and Eichengreen (1993). Even though the membership of the CEECs in the monetary union is several years away even with the most optimistic assumptions, it is of interest to see how closely they correspond to the criteria of an optimum currency area. In all previous studies, correlation of shocks has been calculated against Germany or perhaps France, which are thought to form the “core” of the euro area. However, the German experience in the 1990s may have been unique because of unification. Therefore, we argue that a correlation with the euro area as a whole is the appropriate benchmark. Moreover, as a common monetary policy is conducted for the whole euro area, it is appropriate to assess how well the CEECs are integrated with the entire euro area, not with single countries within this aggregate. A priori, one could expect a quite high correlation in business cycles, as the CEECs’ foreign trade is conducted largely with the EU countries (see Fidrmuc, 2003). It turns out that shocks in some accession countries are indeed quite highly correlated with the euro area shocks. Especially, Hungary and Estonia are very close to smaller euro area countries in this regard. Generally, demand shocks are quite different in the CEECs, perhaps reflecting their different policy priorities during the transition towards market economies in the 1990s. Our results indicate that there are accession countries for which prospective membership in the monetary union would probably not pose too many problems, at least not because of asymmetric business cycles. For other CEECs the asymmetry of business cycles continues to be quite high, and hence early membership in the monetary union could be problematic. The paper is organized as follows. The next section reviews literature on an optimum currency area theory, as it relates to the accession countries of Central and Eastern Europe.1 The third section describes the method used to recover supply and demand shocks. In Section 4, we proceed to estimate the shocks and assess their nature across countries. The last section offers some concluding remarks.