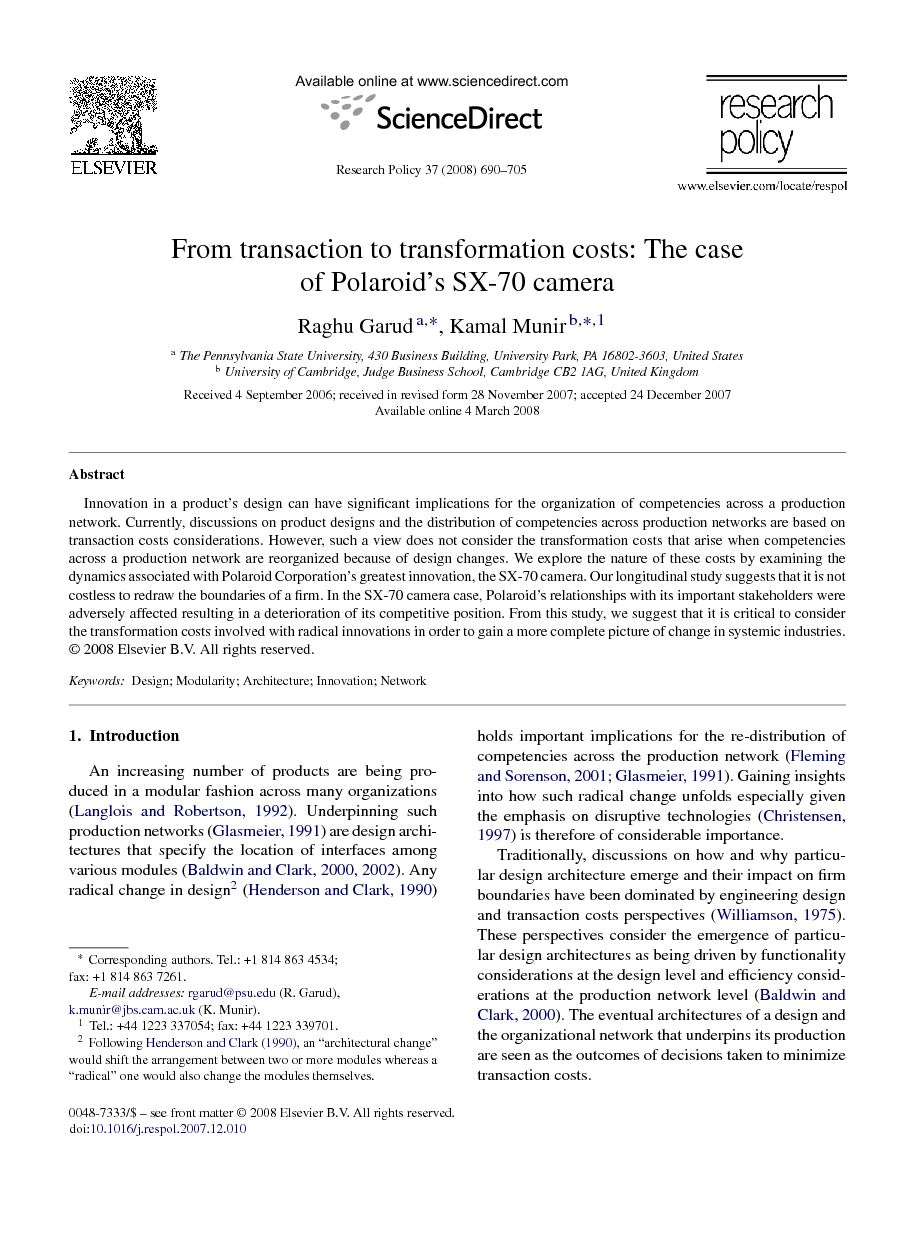 Innovation in a product's design can have significant implications for the organization of competencies across a production network. Currently, discussions on product designs and the distribution of competencies across production networks are based on transaction costs considerations. However, such a view does not consider the transformation costs that arise when competencies across a production network are reorganized because of design changes. We explore the nature of these costs by examining the dynamics associated with Polaroid Corporation's greatest innovation, the SX-70 camera. Our longitudinal study suggests that it is not costless to redraw the boundaries of a firm. In the SX-70 camera case, Polaroid's relationships with its important stakeholders were adversely affected resulting in a deterioration of its competitive position. From this study, we suggest that it is critical to consider the transformation costs involved with radical innovations in order to gain a more complete picture of change in systemic industries.

An increasing number of products are being produced in a modular fashion across many organizations (Langlois and Robertson, 1992). Underpinning such production networks (Glasmeier, 1991) are design architectures that specify the location of interfaces among various modules (Baldwin and Clark, 2000 and Baldwin and Clark, 2002). Any radical change in design2 (Henderson and Clark, 1990) holds important implications for the re-distribution of competencies across the production network (Fleming and Sorenson, 2001 and Glasmeier, 1991). Gaining insights into how such radical change unfolds especially given the emphasis on disruptive technologies (Christensen, 1997) is therefore of considerable importance. Traditionally, discussions on how and why particular design architecture emerge and their impact on firm boundaries have been dominated by engineering design and transaction costs perspectives (Williamson, 1975). These perspectives consider the emergence of particular design architectures as being driven by functionality considerations at the design level and efficiency considerations at the production network level (Baldwin and Clark, 2000). The eventual architectures of a design and the organizational network that underpins its production are seen as the outcomes of decisions taken to minimize transaction costs. However, by focusing on the creation of efficient boundaries at any given point in time, a transaction costs perspective tends to underplay both the historical contingences that shape innovation as well as the complex non-linear real-time processes that emerge as the innovation unfolds (von Hippel, 1990). As a result, such a perspective does not capture all the transformation costs involved during as architectures emerge or change. Noticing this lacuna, several scholars have called for a more dynamic understanding of the connections between architectures at the design and the production network levels (cf. Fixson and Park, 2007, Jacobides, 2005 and MacDuffie, 2007). Our paper attempts to address this issue. We do so by conceptualizing designs and production networks as embodying the interests of many different firms that are involved. Such a conceptualization of designs and production networks prompts us to consider the mutual interdependencies and tensions that arise across various transactional relationships over time. From this perspective, any architecture, even if it appears to be a logical outcome of efficient design choices, is only a temporary resolution of several interests that can easily be destabilized in a number of different ways thereby paving the way for radical change to unfold. As radical change unfolds, new contingencies may arise as the design and the production network within which it is nested interact and influence one another. A consideration of these dynamics makes it possible to capture important facets of radical change that are likely to be overlooked by traditional transaction costs perspectives. We chose Polaroid's landmark innovation, the SX-70 camera, as an instance to explore such transformational dynamics. Introduced in 1972 by Polaroid, the SX-70 was hailed as one of the greatest technological accomplishments in the history of the industry (Life Magazine, 1972 and Cordtz, 1974). However, in achieving this innovation, Polaroid was fundamentally transformed. Members of the network in which Polaroid was embedded reacted to decisions taken on technical and economic grounds, prompting Polaroid to introduce further changes in the design of its camera. In short, as the SX-70 innovation emerged, Polaroid had to incur significant transformation costs. In developing our arguments, we first explain how the architecture of production networks is understood from engineering (Clark, 1985) and transaction costs perspectives (Baldwin and Clark, 2000 and Baldwin and Clark, 2002). We then describe Polaroid's experience with its innovative SX-70 camera and film system, in particular how it led to dramatic changes in the architecture of the production network. Based on our in-depth study, we infer that, such changes in architecture entail significant transformation costs.

In this paper, we have suggested that traditional transaction costs based explanations of modularity in design and production networks are limited by (a) a tendency to analyze one transactional interface at a time thereby ignoring interdependencies, (b) an assumption that transactional relationships are stable unless subject to exogenous changes, and (c) a propensity to ignore how non-transactional interfaces (e.g., with Wall Street) influence the success or failure of radical innovation projects. Through an in-depth examination of Polaroid's attempt to introduce the next generation Instant camera, we offered insights into the complex dynamics that underlie radical innovation that are often obscured by the models that we find in the literature on modularity. Specifically, in contrast to the engineering design or transaction costs inspired research on modularity, we found that the processes whereby firms make radical design changes may not necessarily yield efficient outcomes. While managers may be motivated by transaction costs considerations, transformation costs inherent in reconfiguring interests embodied in the production network around a design may outweigh efficiencies that may be gained. These transformation costs arise in the course of redrawing boundaries, and, in contrast to transaction costs, must be managed on an ongoing basis. This is because tensions underlying transactional interfaces act as endogenous triggers for change. Moreover, factors beyond those specific to a particular transaction can come into play and, given time pressures and investor expectations that such organizations almost inevitably face, innovative projects might veer far off from their intended trajectories. To what extent are these findings generalizable? Clearly, the SX70 innovation was a radical innovation. However, as the battery case shows, even more modest changes, such as “architectural innovations” (Henderson and Clark, 1990), can have profound implications for the distribution of competencies and interests across a production network in a systemic field where multiple partners are involved. Indeed, as the Swiss watch (Glasmeier, 1991) and automobile (Abernathy et al., 1983) examples confirm, transformational issues associated with radical and architectural innovations deserve greater attention. We believe that our study sensitizes scholars and practitioners to a set of underlying forces that need to be considered and validated with other studies. Research on modularity has begun to develop significant implications for questions of firm boundaries (Baldwin and Clark, 2000). Our study takes these developments further by suggesting that firm boundaries are not outcomes of clear-cut transaction costs considerations alone but of a process that involves transformation costs that arise in the process of radical change. Even simple technical decisions with respect to particular interfaces within the product design can unleash broader dynamics that engulf the entire development process. It is therefore important not only to locate module boundaries where mundane transaction costs are minimized, but to also sense tensions at existing interfaces and assess how these could turn into endogenous triggers for unanticipated changes. This involves the continual monitoring and resolution of the various pressure points that are bound to build up. In sum, with increasing modularity in designs and concomitant division of labor in production networks, it is critical for managers to go beyond transaction costs considerations and appreciate the transformation costs that are likely to arise during the course of a radical change.