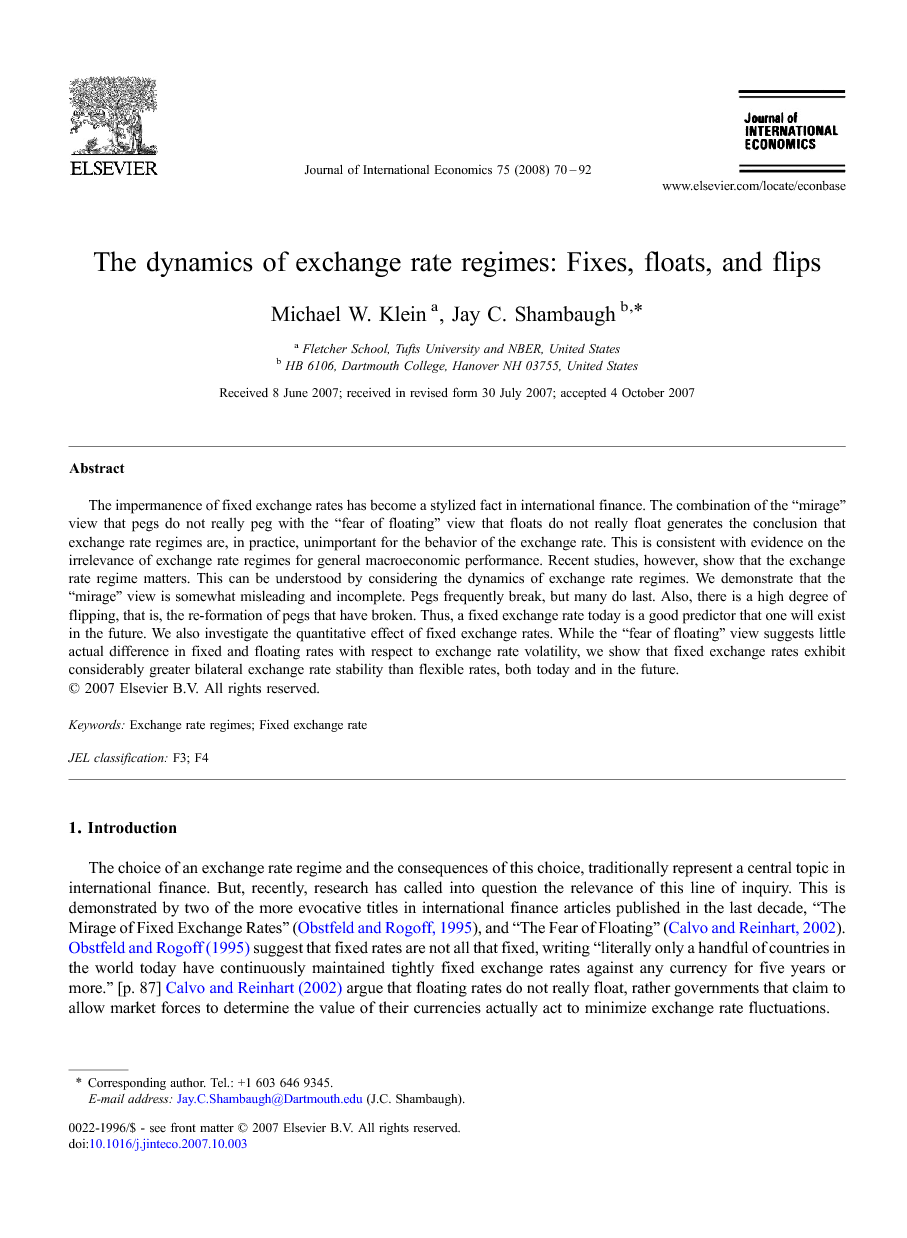 There has been a flurry of new research showing substantial effects of the exchange rate regime on trade and a variety of macroeconomic outcomes. These results seem inconsistent with widespread perception that pegs do not really peg and floats do not really float, that is, that exchange rate regimes do not matter for the exchange rate, let alone other outcomes. This paper provides a new set of empirical regularities regarding the relevance of exchange rate regimes for exchange rate related outcomes which, in an important way, is a prerequisite for understanding how these regimes affect any other outcomes. We find that, despite the fact that many peg spells break soon after they begin, a fair number last beyond five years. These longer spells are overrepresented in an annual cross-section, as compared to short spells. In addition, once a peg lasts longer that a year or two, the probability that it will continue for one more year, conditional on lasting up until that year, begins to rise dramatically. The implication of this is that the length of a particular peg is more important than the less specific knowledge of average peg duration for agents considering actions that are affected by the maintenance of the peg. We also show that float spells have properties similar to those of peg spells, especially with respect to the prevalence of many short duration spells. An implication of this is that many countries re-form pegs quickly after experiencing the end of a peg spell. We also demonstrate important quantitative differences in exchange rate volatility across exchange rate regimes. These results are obtained even when controlling for country and year fixed effects, and for inflation behavior and capital controls. The difference also persists into the future, and we find that a peg today predicts lower volatility for a number of years out. We also find that bilateral pegging lowers multilateral exchange rate volatility, although this comes from the avoidance of high volatility outcomes rather than through an effect across the wide distribution of pegs and floats. Finally, we show that extremely high volatility outcomes are not more likely to follow a year with a peg than a year with a float, although there are a disproportionate number of high volatility outcomes in the immediate wake of long duration pegs as compared to shorter duration pegs. There are a number of policy implications one could draw from these results. Pegging does promote greater exchange rate stability, but a newly initiated peg may not last and the first year after a peg has a significantly higher rate of volatility than other years during a float spell. In addition, a peg may not stabilize other bilateral exchange rates unless it prevents high volatility; but other stable economic policies or strong institutional structures are, perhaps, better positioned to do this. But once a peg has lasted for a few years, its likelihood of enduring increases and, even if it breaks, it is likely to re-form quickly. The results presented in this paper help resolve the puzzle of why recent empirical work has found the exchange rate regime can matter in a variety of contexts when the perception is that fixed exchange rates are a mirage and governments fear floating currencies. These results can also provide some guide for theory that focuses on exchange rate stabilization by highlighting the distinction between the effects of fixed exchange rates for multilateral and bilateral exchange rates. For example, current debate in the New Open Economy Macroeconomics literature revolves around the appropriate exchange rate regime choice, often focusing on the ability of pegs to stabilize prices and consumption across countries. However, in these two-country models, multilateral and bilateral volatility are the same. Our results show that the multilateral rate will be stabilized, but cannot be stabilized perfectly. The peg has a weaker effect on the multilateral rate and many pegs still have fairly volatile multilateral rates. Thus, we need to take care when using tractable two-country models to recall when results involving a peg require the peg to stabilize the bilateral rate or the multilateral rate.