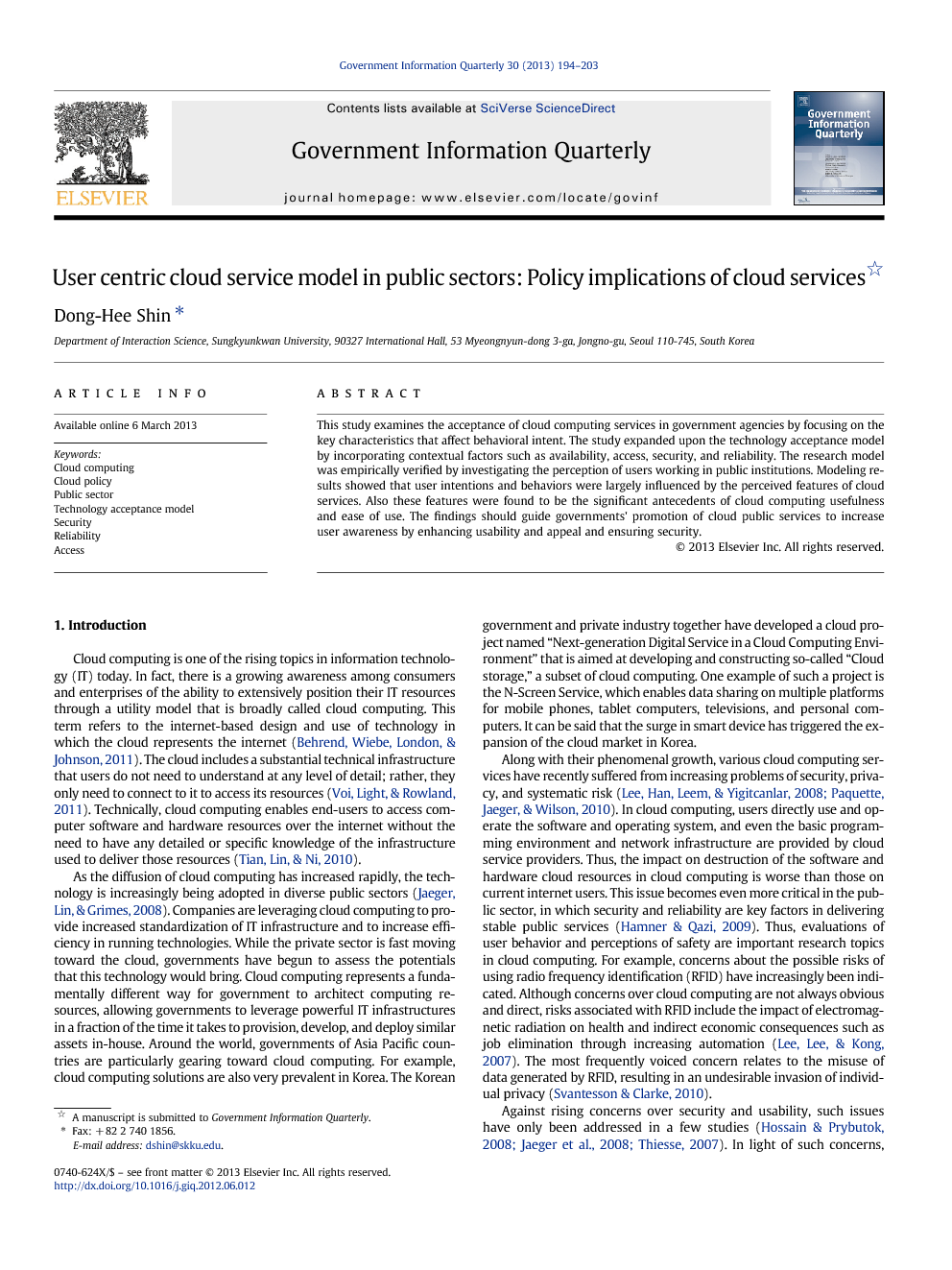 This study examines the acceptance of cloud computing services in government agencies by focusing on the key characteristics that affect behavioral intent. The study expanded upon the technology acceptance model by incorporating contextual factors such as availability, access, security, and reliability. The research model was empirically verified by investigating the perception of users working in public institutions. Modeling results showed that user intentions and behaviors were largely influenced by the perceived features of cloud services. Also these features were found to be the significant antecedents of cloud computing usefulness and ease of use. The findings should guide governments' promotion of cloud public services to increase user awareness by enhancing usability and appeal and ensuring security.

5.1. Structural model Table 1 shows the structural modeling estimate. The overall model fit was satisfactory, with all of the relevant goodness of fit indices being > 0.90. Chi-square statistics showed non-significance for both the measurement and the structural models, indicating that the two models adequately fit the data. The goodness of fit index was 0.95, the adjusted goodness of fit index was 0.91, and the Tucker–Lewis index was 0.91. Similarly, there was no evidence of misfit, with the root mean square error approximation showing a fairly satisfactory level of 0.067, which favorably compares to the suggestions by Joreskog and Sorbom (1996), who suggested that values ≥ 0.06 reflect a close fit. The standardized root mean square residual, at 0.027, was also very good, well below the threshold for a good overall fit. Another positive test statistic was the normed Chi-square value of 1.98, a value that was appropriately well below the benchmark of 3, indicating good overall model performance. Since the model shows satisfactory fit indices, the path coefficients of the structural model can be assessed.5.2. Structural paths and hypothesis tests The hypothesized causal paths were estimated to test the structural relationships, and nine hypotheses were supported while two were rejected. The results are reported and depicted in Table 2. Overall, the results support the proposed model, confirming the antecedents of PU and PEoU in cloud computing. Most paths in the model were statistically significant, highlighting the significant roles of the cloud computing features in determining user PU and PEoU, which then affect intent to use cloud computing (H2 and H3).Although intention is significantly influenced by exogenous variables, the effect of intention on usage behavior was moderate or weak in this model (H1, β = 0.21, t = 2.981, p < 0.05); probably because users want to confirm their behavioral intention using other factors. In other words, while users might have strong intentional will, they may still have lingering doubts that limit their actual behavior. In fact, there might be other factors that lead users to actual usage. Interestingly, actual behavior is significantly influenced by SN (β = 0.52, t = 3.304, p < 0.001). Both endogenous variables, intention to use and behavior, showed significant correlations with their exogenous variables. Thus, the question of why positive intention did not lead to actual behavior was raised. There is a clear gap between intention and actual behavior. Approximately 54% of the variance in the intention to use cloud computing was explained by the variables in the model (R2 = 0.541). The R2 of actual behavior was explained by about 29% using the exogenous model constructs. Because both R2 values were fairly high, it can be reasonably inferred that there is a missing link between the two. This finding implies that while cloud computing users might have a strong intention influenced by PU and PEoU, this intention does not automatically lead to actual behavior. While users might cognitively perceive the excellent features of cloud computing, they may not actually intend to use the system unless the important issues are addressed. These users may want to personally ensure that cloud computing is reliable and dependable. While the model shows a pattern that highlights the importance of both utility and usability, the model underplays the link between intention and behavior compared with those in previous studies employing TAM. A gap between intention and behavioral intention in cloud computing may be inferred. Social influences like SN can play a facilitating role between intention and behavior. This role sheds light on possible advancement in terms of theory and practice. Thus, further tests are needed to uncover possible underlying effects. 5.3. Comparing public vs. private As the findings in the public sector show a significant result, it is worthwhile to compare and contrast with the private sector. With the public sector adoption model in place, this study further collected survey data from the private sector. To compare with the public sector model, data from the private sector collected were the equal number of respondents of the public sector. A marketing firm specialized in data collection, survey design, and survey administration collected data from various private sectors (banking, IT, manufacturing, retailing, and research). Interestingly, the result from private sector adoption shows a similar result from the public sector, yet there were different patterns and importance (Table 3). Just like the public sector case, all twelve hypotheses were supported with sufficient path coefficients and t-value. There were noticeably different patterns between the sectors. For example, access factor shows to be moderately significant to the public sector (* p < 0.05; ** p < 0.01), whereas it shows high significance (both ***p < 0.001). Similarly, while availability shows a moderate significance to the public sector, high significance shows to the private sector. Same thing happens to reliability. It can be inferred that while the factors in the public sector are equally important in the private sector, different matrices of importance exist across the sector. Access, reliability, and availability may be important in operating the private sector, while security and usefulness may be the key criteria in providing for the public sector. In this light of difference, SN may also play a higher role in public than private.