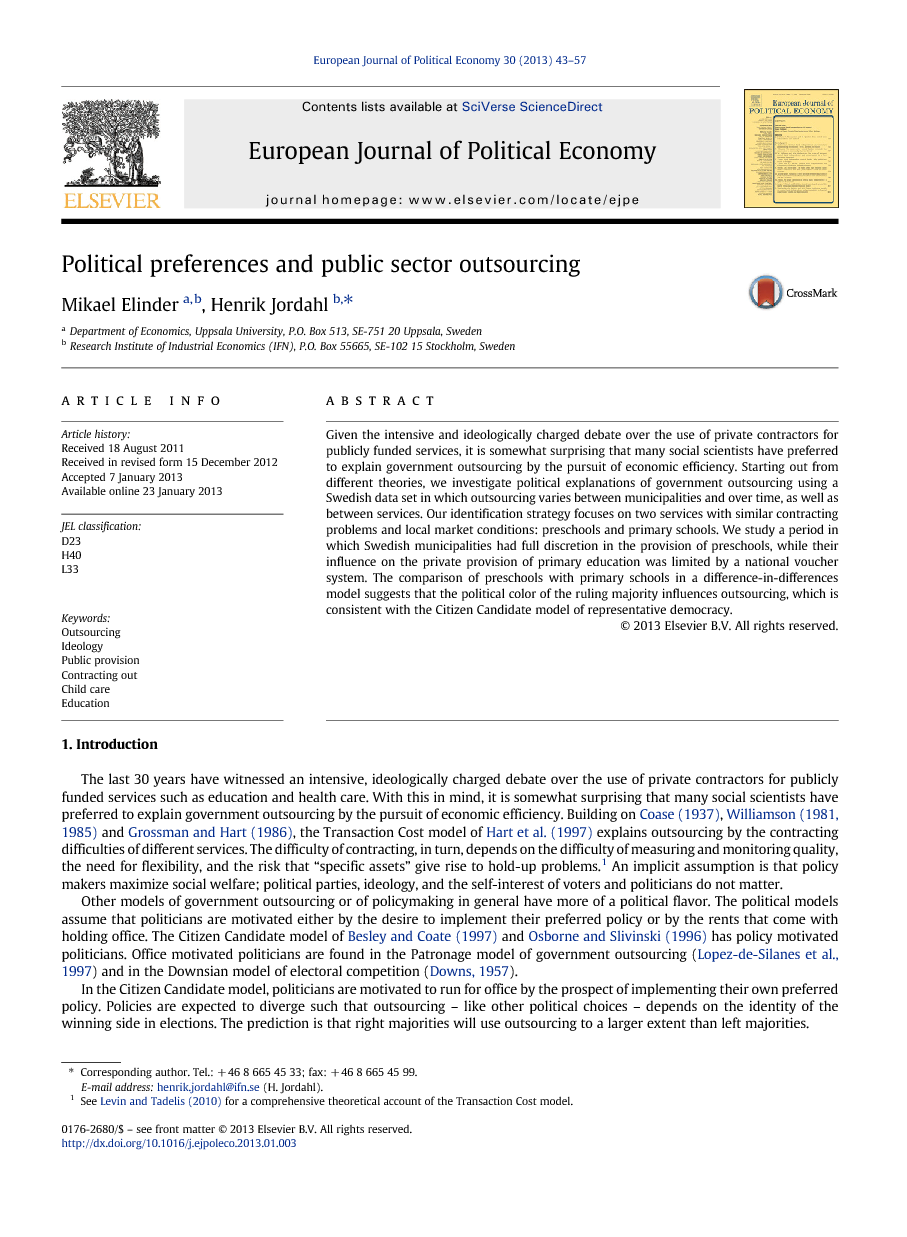 Given the intensive and ideologically charged debate over the use of private contractors for publicly funded services, it is somewhat surprising that many social scientists have preferred to explain government outsourcing by the pursuit of economic efficiency. Starting out from different theories, we investigate political explanations of government outsourcing using a Swedish data set in which outsourcing varies between municipalities and over time, as well as between services. Our identification strategy focuses on two services with similar contracting problems and local market conditions: preschools and primary schools. We study a period in which Swedish municipalities had full discretion in the provision of preschools, while their influence on the private provision of primary education was limited by a national voucher system. The comparison of preschools with primary schools in a difference-in-differences model suggests that the political color of the ruling majority influences outsourcing, which is consistent with the Citizen Candidate model of representative democracy.

Traditional explanations of public sector outsourcing have mainly focused on contracting difficulties and transaction costs. The few papers that have tested for political explanations have either focused on the Patronage model or failed to connect their results to specific political theories. In this paper, we have tested for political explanations of outsourcing by making use of a new data set containing detailed information on outsourcing in Swedish municipalities. We find that right governments are more prone to use outsourcing to provide publicly financed services than left governments. This is consistent with the political view of government outsourcing in the Citizen Candidate model of Osborne and Slivinski (1996) and Besley and Coate (1997), in which politicians are motivated by the chance to implement their own preferred policy. Other political models (the Patronage model and the Downsian model) fail to capture the development of outsourcing in the Swedish public sector. The Downsian model explicitly predicts that there should be no difference in outsourcing between left and right governments, whereas the Patronage model does not give any comparable prediction. The Patronage model predicts that voters' preferences will have a larger influence on outsourcing in close elections, a prediction which our data do not support. Given its prominence among economists, most notable is the inability of the Transactions Cost model to explain the outsourcing pattern in Swedish municipalities. Both our descriptive and our econometric evidence speak against the relevance of the Transaction Cost model. Our result stands in contrast to previous studies in other countries, which have mostly concluded that political preferences are unrelated to outsourcing. We conclude that the political preferences of the ruling majority appear to be important in explaining public sector outsourcing. The related question of whether outsourcing affects electoral outcomes and whether it does so differently for the left and for the right is left for future research.