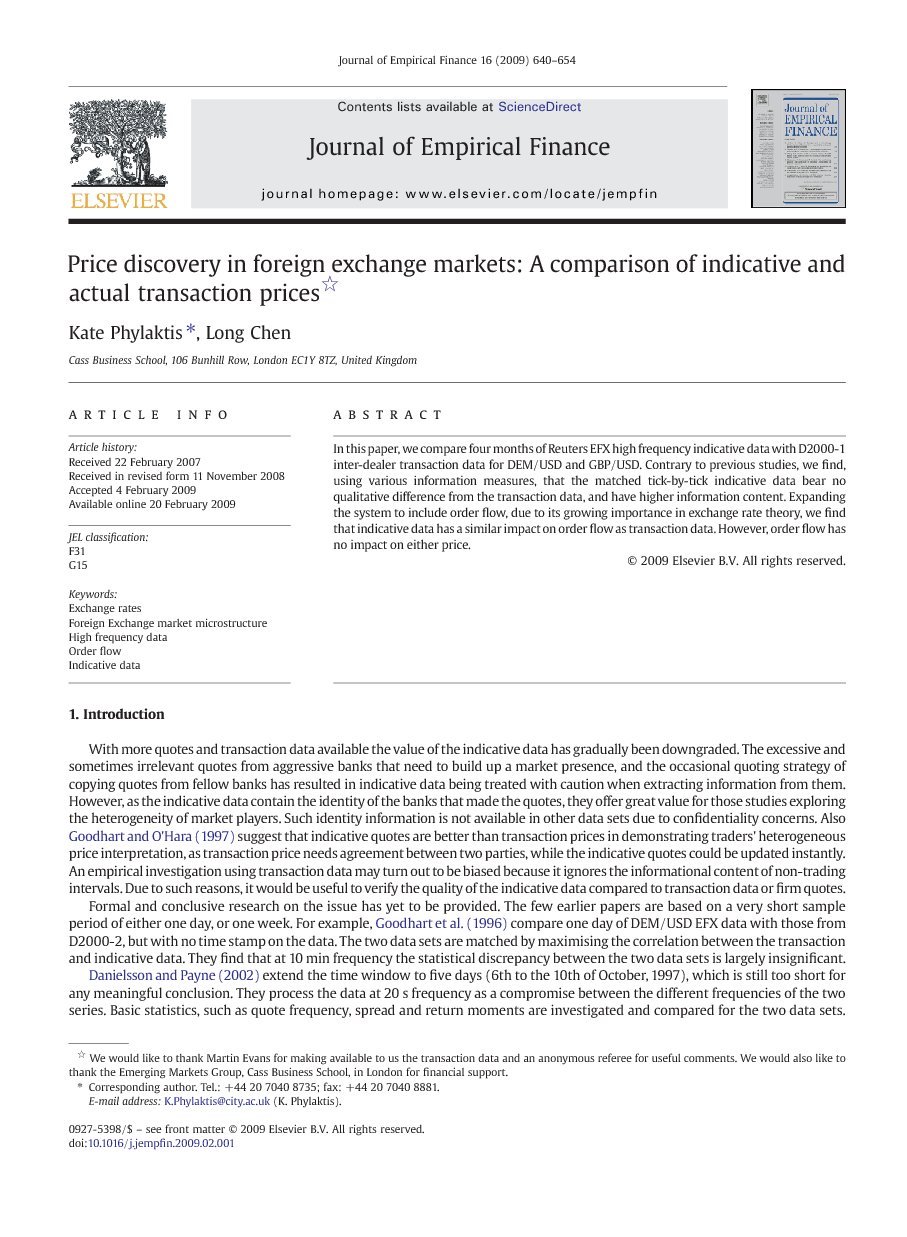 With more quotes and transaction data available the value of the indicative data has gradually been downgraded. The excessive and sometimes irrelevant quotes from aggressive banks that need to build up a market presence, and the occasional quoting strategy of copying quotes from fellow banks has resulted in indicative data being treated with caution when extracting information from them. However, as the indicative data contain the identity of the banks that made the quotes, they offer great value for those studies exploring the heterogeneity of market players. Such identity information is not available in other data sets due to confidentiality concerns. Also Goodhart and O'Hara (1997) suggest that indicative quotes are better than transaction prices in demonstrating traders' heterogeneous price interpretation, as transaction price needs agreement between two parties, while the indicative quotes could be updated instantly. An empirical investigation using transaction data may turn out to be biased because it ignores the informational content of non-trading intervals. Due to such reasons, it would be useful to verify the quality of the indicative data compared to transaction data or firm quotes. Formal and conclusive research on the issue has yet to be provided. The few earlier papers are based on a very short sample period of either one day, or one week. For example, Goodhart et al. (1996) compare one day of DEM/USD EFX data with those from D2000-2, but with no time stamp on the data. The two data sets are matched by maximising the correlation between the transaction and indicative data. They find that at 10 min frequency the statistical discrepancy between the two data sets is largely insignificant. Danielsson and Payne (2002) extend the time window to five days (6th to the 10th of October, 1997), which is still too short for any meaningful conclusion. They process the data at 20 s frequency as a compromise between the different frequencies of the two series. Basic statistics, such as quote frequency, spread and return moments are investigated and compared for the two data sets. Using Hasbrouck's ECM based information share, they find that D2000-2 has a dominant role in pricing the information except during midnight hours. However, all these differences disappear when they aggregate the data into 5 and 10 min frequency. In our paper, we use indicative data from Reuters high-frequency EFX quotes on the DEM/USD and GBP/USD. The corresponding transaction data are D2000-1 inter-dealer transaction data on the same currency pairs.1 Our sample data span 82 trading days, increasing substantially the time window compared to previous work, and making our empirical tests more reliable. Furthermore, instead of only focusing on DEM/USD, we also introduce GBP/USD to make the comparison of the two data sets more conclusive. In this paper, we employ various methods to compare the indicative data and their corresponding transaction data. We conduct first cross correlation tests to investigate the lead and lag relation between the indicative and transaction return series. We find that both indicative currency pair data sets lead transaction data by around 5 to 10 min. We then use Hasbrouck's (1995) information share technique to recover the information content of the two data sets, which further suggests that indicative data have the dominant role in mapping the fundamental information into the prices. We vary the data frequency of the data by using real transaction time, 5 and 10-minute calendar time frequency to test the robustness of our results. Furthermore, we perform our tests for different trading sessions according to the opening and closing times of major foreign exchange markets in order to eliminate the trading zone effect on the 24-hour global foreign exchange trading. Finally, due to the growing importance of order flow in exchange rate theory, we investigate whether our indicative data are relevant to the relationship between the order flow from the D2000-1 data and transaction prices. Order flow is the difference between the volume of dollar buyers initiated trades and that of the seller initiated trades. Micro-based foreign exchange models treat order flow as an important channel to map the widely dispersed fundamental information on to exchange rates. In Lyons and Evans' various models (see e.g., Evans and Lyons, 2002 and Evans, 2002), the causality runs strictly from order flow to exchange rates. By applying generalized impulse response method to both price series and order flow, we first find that the D2000-1 prices take longer (up to 5 to 10 min) to absorb one standard error of shock from the EFX price, compared to the time that EFX price takes to absorb one standard error of shock from the D2000-1 price. This confirms the results of the cross-correlation test. Adding to these findings is that the shock from EFX data imposes similar impact on order flow as the shock from D2000-1. However, we find that there is no significant impact from the shock of order flow to prices at both 5 and 10 min frequency. Though the prices and order flows display obvious co-movements during our sample period, it seems that order flow has more of a latent response to changes in prices, which is in contrast to Lyons' (2001) claim that order flow explains exchange rates at lower frequencies (1 h or daily frequency). Granger causality tests confirm this result and cast doubt on the importance of order flow as an important determinant of exchange rates. The paper is structured as follows. In Section 2, we give a description of our data sets and how we process them before we conduct our empirical tests. In Section 3, we carry out a simple lead-lag return analysis and then the routine unit root and cointegration tests. In Section 4, we estimate the Hasbrouck information share for both prices. In Section 5, we introduce the order flow to the price data and perform generalized impulse response analysis and Granger causality tests. In the final section, we briefly summarize the results and the significance of our findings.

By comparing various statistical features of the EFX and D2000-1 data sets, we find that, contrary to previous studies, the indicative data are not inferior in terms of quality of information. More precisely, both lead-lag and impulse response analyses conclude that the indicative data lead the transaction data by 5 to 10 min. Furthermore, information share technique indicates a dominant role for the indicative data in mapping information. By adding order flow in the trivariate generalized impulse response analysis, we find that EFX price has a similar impact on order flow as D2000-1 price. These findings are supportive of studies using indicative data, since the quality of their data has never been formally tested. As indicative data contain important information on the identity of the banks that made the quotes, they provide unique value for the study of market heterogeneity. The different merits of indicative and transaction data in reflecting market information suggest that we should combine both types of data to reveal the hidden picture of the heterogeneously distributed information in foreign exchange markets.