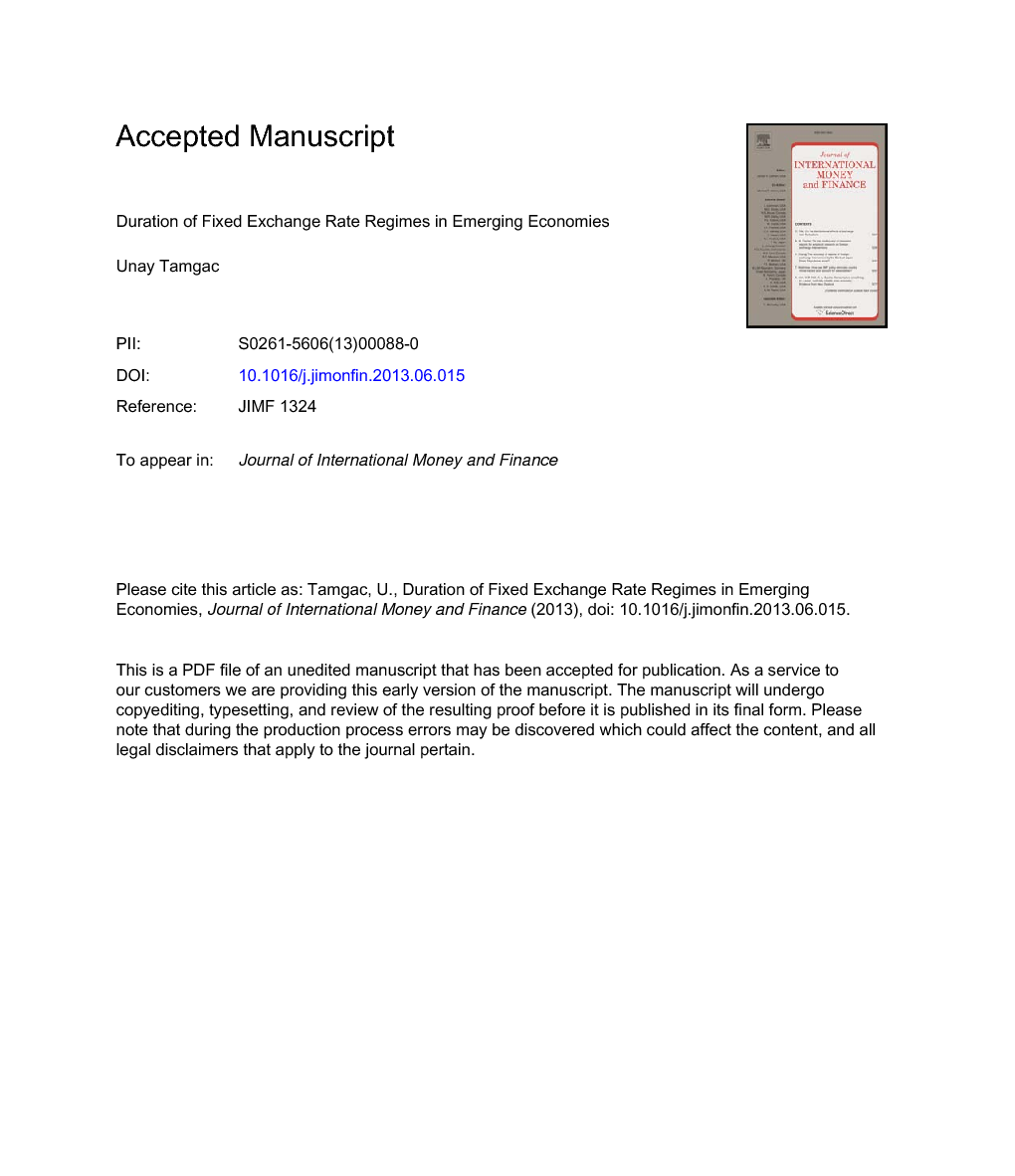 This paper examines the duration of fixed exchange rate regimes and investigates whether there is a certain pattern of time dependence in the survival rate of pegged exchange rate regimes for emerging economies. We query why some fixed regimes last longer and determine the macroeconomic, social and political factors that make a pegged regime more durable. We use survival analysis, a technique which accounts for the unobservable cumulative effects associated with maintaining a fixed exchange rate that build up over the duration of a regime. In our model, time enters as a proxy for these unobserved persistent effects as we investigate the relative importance of the fundamentals in the economy on regime durability by considering their relation together with the effect of time itself. Using the de facto exchange rate regime classification proposed by Reinhart and Rogoff (2004), we find non-monotonic duration dependence and show that time is a significant factor for the duration of pegged regimes. Openness, changes in foreign reserves, growth, real exchange rate misalignment, claims on government and sociopolitical instability are also found to influence the pegged regime duration.

The choice of the exchange rate regime is an important policy decision facing emerging economies. Despite frequent collapses, many emerging economies continue to follow some sort of a de facto fixed exchange rate regime. Regime switches between fixed and floating regimes are common, and there are few emerging economies that have managed to maintain a fixed regime for more than 10 years. The expected duration of pegged regimes and the factors that affect their sustainability is still a central question for economists and policy makers. Is this low regime persistence a result of macroeconomic and financial conditions, or is there a certain time dependence that makes fixed regimes less durable over time. Specifically, what are the factors that affect regime durability? One problem in measuring the effect of the fundamentals on regime duration is the possibility of some unobservable cumulative effects associated with maintaining a fixed regime that build up over the regime duration. These are the effects for which there is no direct measure, but their impact affects regime sustainability. Example of such an effect is the buildup of a regime’s credibility. In such a case the expectation would be for a regime to become more sustainable the longer it has been effective. However, it is also possible that some negative factors that affect the continuation of the regime adversely will build up over time and make the regime less sustainable. The effect of such unobservable persistent effects has not been studied in the literature before. If such unobservable effects were present, any analysis that does not consider them would be biased. We overcome this problem by using a specific technique, survival analysis, which allows for explicit modeling of time dependence, and the inclusion of explanatory variables that change over time. In our analysis, time enters as a proxy for the unobserved cumulating effects that affect regime duration. This allows us to investigate the relative importance of the factors on regime durability by considering their relation together with the effect of time itself. Using a large sample of countries, we have shown that the survival experience of pegged regimes differs across economies, and that emerging economies have the highest hazard rate compared to other country groups. The hazard rate of the emerging economies is also the most volatile, suggesting that time plays a more important role in the sustainability of pegged regimes in these economies. In addition, we estimate the hazard rate using a Semi-parametric Cox model with time varying covariates. The model gives us an estimate of sustainability as a function of macroeconomic and financial variables, and as a function of the duration of the pegged regime itself. The results show that misalignment in the exchange rate, an increase in liability dollarization and claims on the government reduce the lifetime of a pegged regime. On the other hand, economic growth, an increase in foreign reserves, improvement in the current account and a strong foreign asset position increase regime duration. Open economies have a lower hazard rate, suggesting that the cost of abandoning the peg is higher for open economies. Another important finding is that capital controls are not effective in increasing regime duration. Among the socio-political factors of regime duration, we find that the probability of an exit from a fixed regime is less likely under social conflict and autocratic regimes. Electoral cycles and government ideology are not found to have a significant effect on regime duration. Regime change is more likely in presidential than in an assembly elected president and than in a parliamentary system. We also find that the likelihood exit from a pegged regime increases with central bank independence, supporting the argument that central bank independence and fixed regimes are exercised as alternative monetary commitments. Even after controlling for macroeconomic and socio-political factors, emerging economies exhibit non-monotonic duration dependence, where the probability of abandoning the pegged regime increases initially and then declines. This suggests that time, which captures the cumulating unobservable effects, is an important factor for the regime duration, and also explains why few countries manage to sustain a pegged regime for more than a decade. An extension of the analysis for future work would be to explore the survival experience for a finer classification of intermediate regimes, and analyze how the degree of flexibility affects regime duration. It would also be interesting to look at regime duration for alternative de facto classification measures of exchange rate regimes, specifically, those that do not allow one-time devaluations within the same regime. So far, the literature has focused on the external factors of regime duration. However, this paper has presented that policy makers also need to consider the time dependence of regime duration. Knowledge of the circumstances that make the regime unsustainable can work as early warning signals for authorities who want to maintain a pegged regime or guide them on the timing of a regime change and when to follow tough policies. Our findings suggests that pegged regimes that have survived more than 10 years , such as that of Hong Kong, have passed the threshold point and, unless there are unfavorable changes in the macroeconomic and financial environment, the regime will become even more durable as time goes by.