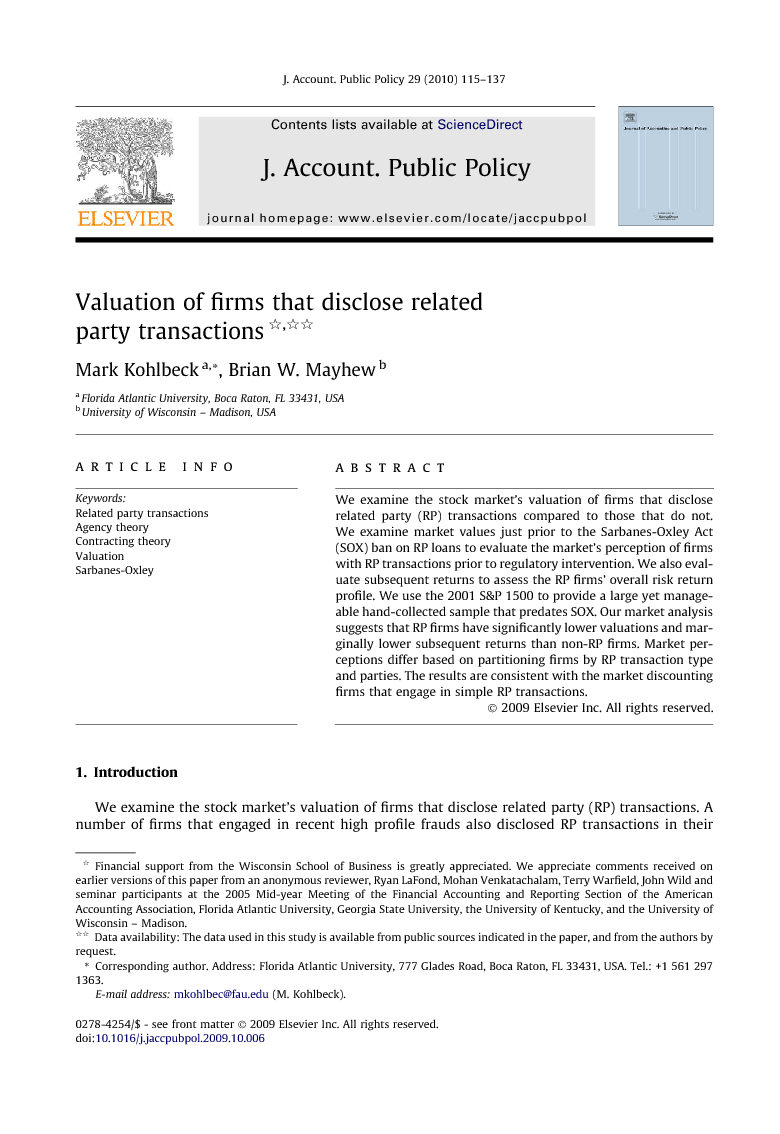 We examine the stock market’s valuation of firms that disclose related party (RP) transactions compared to those that do not. We examine market values just prior to the Sarbanes-Oxley Act (SOX) ban on RP loans to evaluate the market’s perception of firms with RP transactions prior to regulatory intervention. We also evaluate subsequent returns to assess the RP firms’ overall risk return profile. We use the 2001 S&P 1500 to provide a large yet manageable hand-collected sample that predates SOX. Our market analysis suggests that RP firms have significantly lower valuations and marginally lower subsequent returns than non-RP firms. Market perceptions differ based on partitioning firms by RP transaction type and parties. The results are consistent with the market discounting firms that engage in simple RP transactions.

Overall, our results suggest that the market assigns lower values to firms that engage in certain types of RP transactions. We document both lower valuations and subsequent returns for RP firms. Further analyses exploring differences in transaction types suggest firms with simple transactions with DOS drive the negative valuation and returns findings. The RP loans banned by SOX appear to have particularly strong negative valuation implications, and marginal negative returns. However, the market generally does not appear to value more complex RP transactions or those involving a firm’s investments such as partnerships and joint ventures negatively. While proving that there is not some unidentified variable driving the association is not possible, our analysis suggests that no obvious underlying factor is driving the documented associations. Our sample imposes some limitations on our findings. First, we identify all the firms that disclose RP transactions. However, there may be firms that enter into but do not disclose RP transactions. In light of this limitation, our results are best interpreted as documenting a negative market valuation associated with the disclosure of RP transactions. Second, our findings with respect to complex RP transaction firms do not constitute clear evidence that the market values such transactions differently from simple transactions. The complex RP transaction disclosures range from very detailed revenue and expense disclosures to very high level summary discussions that exclude dollar amounts. It is possible that the wide range of disclosure quality leads to the minimal lack of association. Third, we examine the S&P 1500 which while important, represent only part of the market and as a result, caution should be taken not to over-generalize our findings. Finally, 2002 was a year in which RP transactions were in the press on a regular basis with respect to a number of high-profile frauds. This extensive media focus may have increased the market’s sensitivity to RP transactions. This risk is limited to the returns analysis as we examine 2001 valuations prior to the majority of the fraud announcements. Our findings raise some questions about both practice and theory. First, the market seems to treat firms with other simple RP transactions in a manner that is very similar to RP loans which leads us to question separate regulatory treatment for RP loans. But, our findings in general support separate consideration for different types of RP transactions especially for the types of transactions with investments and complex transactions. Regardless of the regulatory implications, our results suggest that those involved in corporate governance (i.e. board members) should carefully consider the potential market costs and the differential impact across RP transaction classifications when deciding whether or not to approve RP transactions. Second, the negative association between RP firms and both valuation and returns suggests that the market price protects against firms that engage in RP transactions, especially simple transactions. This result is somewhat surprising because the transactions are publicly disclosed and international research suggests that the US approach to self-dealing is stronger than most countries (Djankov et al., 2008). We believe our findings can be reconciled with the international research and expectations about disclosure. First, disclosure provides the necessary information for the market to value RP transactions. Without disclosure, the market would not be able to separate RP firms from other firms. Second, we document a significant but modest decline in RP firm value. This modest level of price protection suggests that RP transactions are value relevant. Further, the modesty of the decline is consistent with the argument that disclosure on average inhibits insiders from more damaging transactions that would lower firm valuations even more. Third, it may be that contracting alone cannot entirely overcome the threat of management opportunism. Corporate insiders have considerable power with respect to RP transactions, including what types of contracts the firm enters into and the monitoring mechanisms that are in place. As Jensen and Meckling so eloquently point out, once a manager owns less than the full firm, he has strong incentives to consume firm resources, because he does not bear the full cost of the consumption. Our paper suggests there is a market-based cost to this consumption. However, it may be that from the related parties’ perspective, the market cost does not offset the personal gain to the RP transaction. Furthermore, the market may not have any reason to discipline the behavior after it has taken price protection in the form or lower valuations and returns. The resulting equilibrium suggests a moderate dead-weight loss to the market as whole that neither stockholders nor management are motivated to fix.