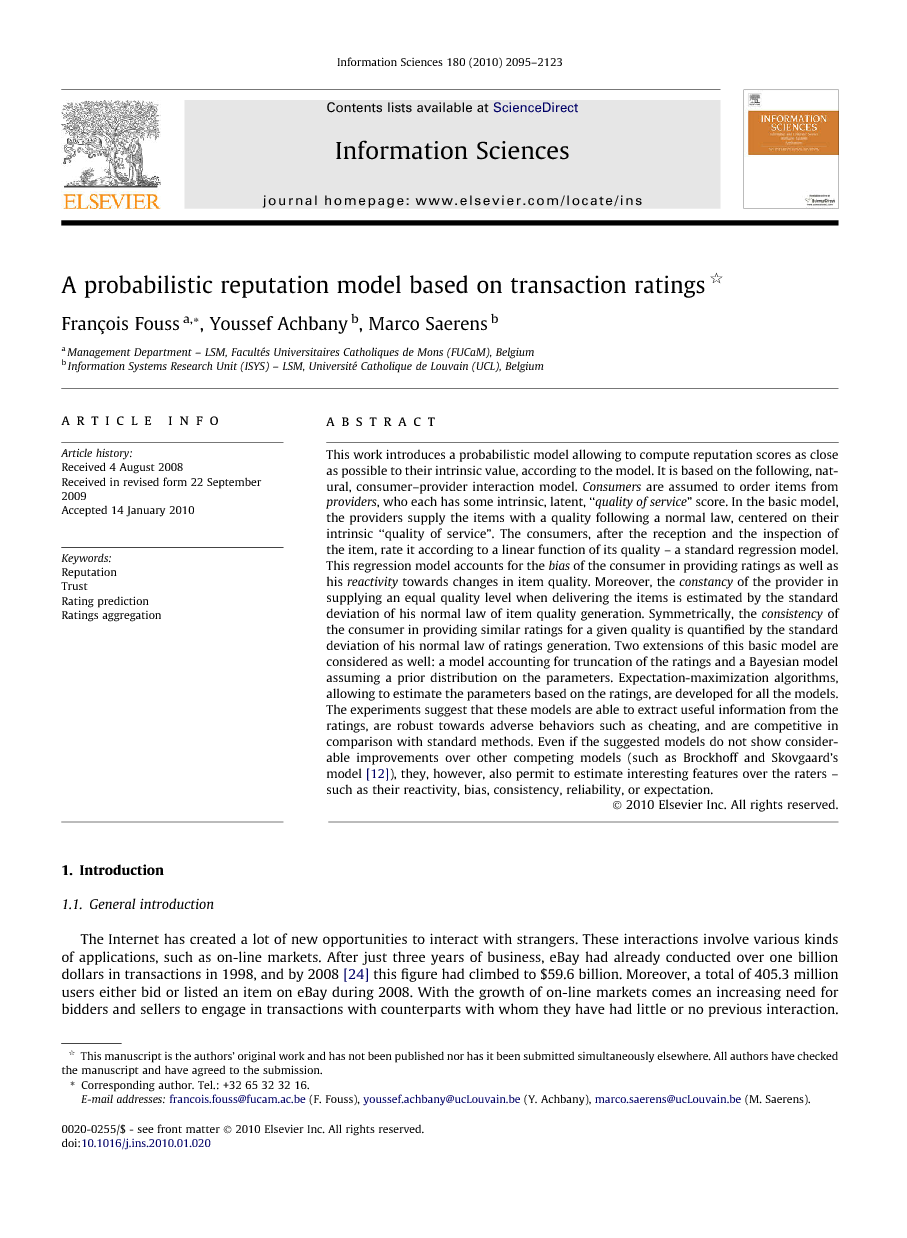 This work introduces a probabilistic model allowing to compute reputation scores as close as possible to their intrinsic value, according to the model. It is based on the following, natural, consumer–provider interaction model. Consumers are assumed to order items from providers, who each has some intrinsic, latent, “quality of service” score. In the basic model, the providers supply the items with a quality following a normal law, centered on their intrinsic “quality of service”. The consumers, after the reception and the inspection of the item, rate it according to a linear function of its quality – a standard regression model. This regression model accounts for the bias of the consumer in providing ratings as well as his reactivity towards changes in item quality. Moreover, the constancy of the provider in supplying an equal quality level when delivering the items is estimated by the standard deviation of his normal law of item quality generation. Symmetrically, the consistency of the consumer in providing similar ratings for a given quality is quantified by the standard deviation of his normal law of ratings generation. Two extensions of this basic model are considered as well: a model accounting for truncation of the ratings and a Bayesian model assuming a prior distribution on the parameters. Expectation-maximization algorithms, allowing to estimate the parameters based on the ratings, are developed for all the models. The experiments suggest that these models are able to extract useful information from the ratings, are robust towards adverse behaviors such as cheating, and are competitive in comparison with standard methods. Even if the suggested models do not show considerable improvements over other competing models (such as Brockhoff and Skovgaard’s model [12]), they, however, also permit to estimate interesting features over the raters – such as their reactivity, bias, consistency, reliability, or expectation.

The Internet has created a lot of new opportunities to interact with strangers. These interactions involve various kinds of applications, such as on-line markets. After just three years of business, eBay had already conducted over one billion dollars in transactions in 1998, and by 2008 [24] this figure had climbed to $59.6 billion. Moreover, a total of 405.3 million users either bid or listed an item on eBay during 2008. With the growth of on-line markets comes an increasing need for bidders and sellers to engage in transactions with counterparts with whom they have had little or no previous interaction. This new type of market has introduced a new risk dimension to traders: the winner of the auction might not deliver payment, the seller might not deliver the item, or the delivered item might not be as the seller described [36] and [63]. These risks are an important restraint to the growth of on-line markets. One of the principal means by which on-line auction sites try to mitigate these risks associated with exchange among strangers is to use electronic reputation or feedback mechanisms (see, e.g., [64] for a detailed description of the eBay reputation system; see [84] and [85] for a discussion of desiderata that are specific for on-line reputation systems). In other words, reputation or feedback mechanisms aim at providing the type of information available in more traditional close-knit groups, where members are frequently involved in one another’s dealings. More generally, as discussed for instance in [8], [20] and [80], on-line markets are often asymmetric information problems: the service provider has private information about product characteristics whereas consumers only have a vague idea. Indeed, consumers cannot directly observe the product quality – they only observe it when buying and receiving it. This asymmetric information may result in undesired behavior, such as a breakdown of the market or the so-called lemons problem [3] and [36]. Therefore, providers (or firms) have to set up signaling instruments/devices to overcome this issue and to establish a trust relationship with the consumer. Such instruments have been studied in marketing and economics – they try to facilitate the communication of the product quality or increase its reputation. They are of various types [8], like advertising, providing free products that consumers can test, contracting a certification label (ISO), offering warranties, branding, providing a reputation mechanism, etc. Indeed, as already observed in the middle age, the sharing of reputation seriously lowers the ability of the dishonest agent to make profit in the future [32] and [80]. In other words, reputation mechanisms help the community learn the true quality of the product by acting as signaling devices [20]. This is the main incentive for designing on-line reputation systems allowing to compute, using ratings provided by consumers, providers’ reputation scores that are as close to their intrinsic values as possible – this is precisely the aim of the present work. Moreover, as discussed later in this general introduction (see Reputation in on-line markets paragraph), there is empirical evidence [9] showing that a reputation mechanism induces quite a substantial improvement in transaction efficiency in on-line markets. Notice however that there remain technical issues with reputation mechanisms in digital markets. For instance, there is usually no real incentive for on-line traders to share one’s own experience-based information with others and on-line traders can change their identities as often as they wish [80]. Two fundamental aspects of reputation systems are the presence of communication protocols (allowing participants to provide ratings about transaction partners as well as to obtain reputation scores of potential transaction partners), and a reputation computation model to derive aggregated scores for each participant, based on received ratings and possibly also on other information. Our work is devoted to the definition of new reputation computation models. The last part of this section introduces (1) various fields where reputation mechanisms have been studied before being applied in on-line markets, (2) important considerations of on-line market reputation systems, and (3) several works related to the development of reputation models (Section 1.2).

This paper proposed a general procedure allowing to estimate reputation scores characterizing a provider’s quality of service, based on transactions between consumers (raters) and providers. As a by-product, some essential features of the raters, such as their reactivity and their bias, are also estimated. The procedure is based on a probabilistic model of consumer–provider interactions whose parameters are estimated by a variant of the expectation-maximization algorithm. Computer simulations show that the model is able to accurately retrieve the correct parameters, much more accurately than simply taking, as a measure of reputation, the average of the ratings for each provider. Further work will investigate the adaptation and the application of the proposed models to the computation of importance scores in social networks or web pages. Indeed, the PMR models could be adapted in order to provide importance scores instead of reputation scores. One key difference between these two features is the crucial impact of the number of ratings on the importance score. A node is considered as important if both the received ratings and the number of ratings are high. We will therefore have to integrate the influence of the number of ratings in our PMR models. Two generalizations of the models introduced in this paper will also be considered. First, the regression models for the providers could easily be extended by introducing some external features characterizing the provider, such as his gender, his age, etc. Symmetrically, the models for the consumer could be extended in the same way by introducing consumer features in the regression model. Second, the consumers are currently assumed to be independent. It could be a good idea to take the correlations between consumers into account.