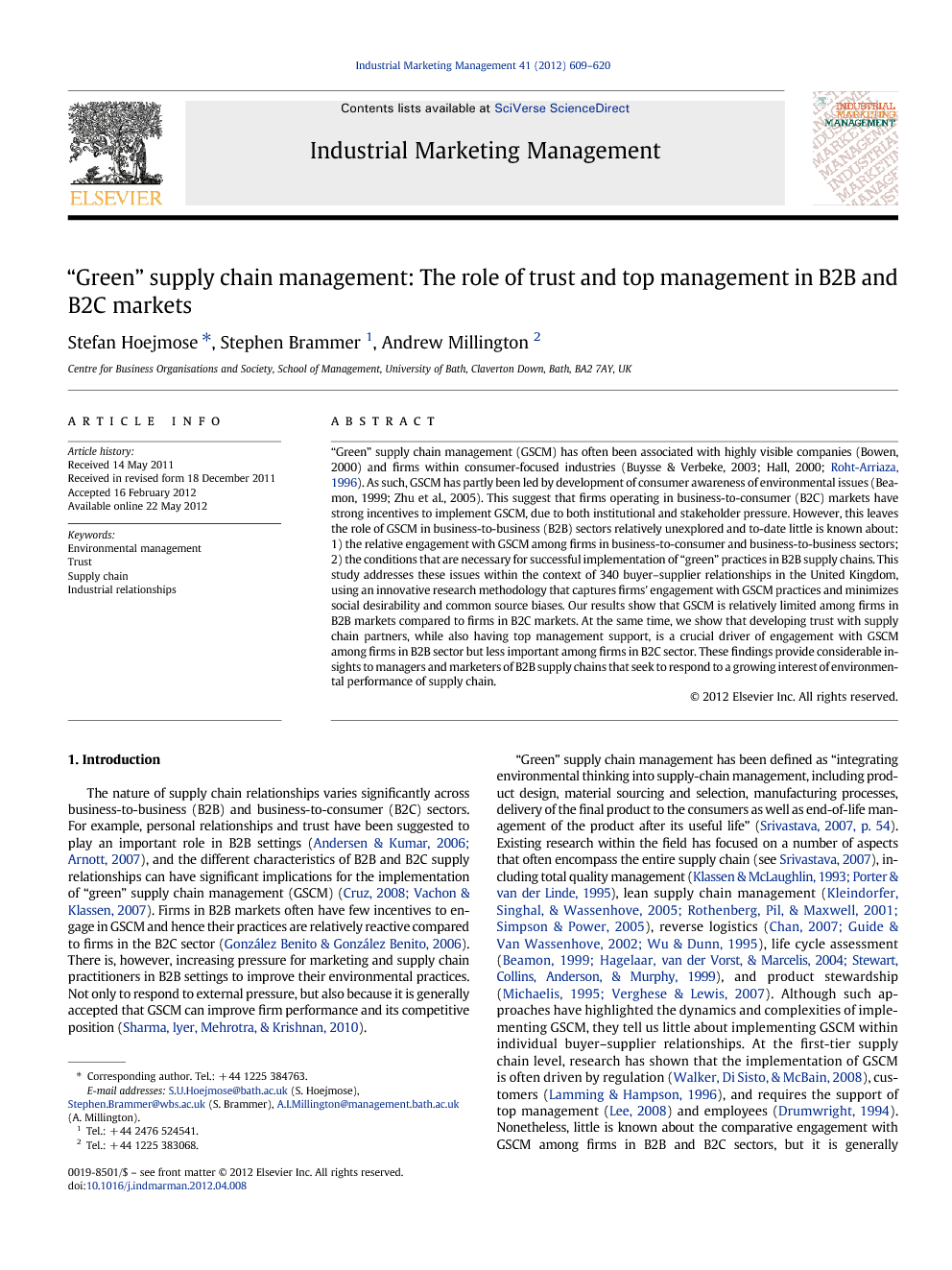 “Green” supply chain management (GSCM) has often been associated with highly visible companies (Bowen, 2000) and firms within consumer-focused industries (Buysse & Verbeke, 2003; Hall, 2000; Roht-Arriaza, 1996). As such, GSCM has partly been led by development of consumer awareness of environmental issues (Beamon, 1999; Zhu et al., 2005). This suggest that firms operating in business-to-consumer (B2C) markets have strong incentives to implement GSCM, due to both institutional and stakeholder pressure. However, this leaves the role of GSCM in business-to-business (B2B) sectors relatively unexplored and to-date little is known about: 1) the relative engagement with GSCM among firms in business-to-consumer and business-to-business sectors; 2) the conditions that are necessary for successful implementation of “green” practices in B2B supply chains. This study addresses these issues within the context of 340 buyer–supplier relationships in the United Kingdom, using an innovative research methodology that captures firms' engagement with GSCM practices and minimizes social desirability and common source biases. Our results show that GSCM is relatively limited among firms in B2B markets compared to firms in B2C markets. At the same time, we show that developing trust with supply chain partners, while also having top management support, is a crucial driver of engagement with GSCM among firms in B2B sector but less important among firms in B2C sector. These findings provide considerable insights to managers and marketers of B2B supply chains that seek to respond to a growing interest of environmental performance of supply chain.

The nature of supply chain relationships varies significantly across business-to-business (B2B) and business-to-consumer (B2C) sectors. For example, personal relationships and trust have been suggested to play an important role in B2B settings (Andersen and Kumar, 2006 and Arnott, 2007), and the different characteristics of B2B and B2C supply relationships can have significant implications for the implementation of “green” supply chain management (GSCM) (Cruz, 2008 and Vachon and Klassen, 2007). Firms in B2B markets often have few incentives to engage in GSCM and hence their practices are relatively reactive compared to firms in the B2C sector (González Benito & González Benito, 2006). There is, however, increasing pressure for marketing and supply chain practitioners in B2B settings to improve their environmental practices. Not only to respond to external pressure, but also because it is generally accepted that GSCM can improve firm performance and its competitive position (Sharma, Iyer, Mehrotra, & Krishnan, 2010). “Green” supply chain management has been defined as “integrating environmental thinking into supply-chain management, including product design, material sourcing and selection, manufacturing processes, delivery of the final product to the consumers as well as end-of-life management of the product after its useful life” (Srivastava, 2007, p. 54). Existing research within the field has focused on a number of aspects that often encompass the entire supply chain (see Srivastava, 2007), including total quality management (Klassen and McLaughlin, 1993 and Porter and van der Linde, 1995), lean supply chain management (Kleindorfer et al., 2005, Rothenberg et al., 2001 and Simpson and Power, 2005), reverse logistics (Chan, 2007, Guide and Van Wassenhove, 2002 and Wu and Dunn, 1995), life cycle assessment (Beamon, 1999, Hagelaar et al., 2004 and Stewart et al., 1999), and product stewardship (Michaelis, 1995 and Verghese and Lewis, 2007). Although such approaches have highlighted the dynamics and complexities of implementing GSCM, they tell us little about implementing GSCM within individual buyer–supplier relationships. At the first-tier supply chain level, research has shown that the implementation of GSCM is often driven by regulation (Walker, Di Sisto, & McBain, 2008), customers (Lamming & Hampson, 1996), and requires the support of top management (Lee, 2008) and employees (Drumwright, 1994). Nonetheless, little is known about the comparative engagement with GSCM among firms in B2B and B2C sectors, but it is generally anticipated that firms in B2C sectors are more involved with GSCM because of greater consumer pressure, media scrutiny and their more immediate visibility to stakeholders (Bowen, 2000 and Hall, 2000). In this study we use a novel data collection approach to capture buyer engagement with GSCM activities within the context of 340 buyer–supplier relationships. Our first aim is to understand and compare the extent of GSCM across firms in B2B and B2C sectors. In addition, we seek to examine the conditions under which firms in the B2B sector implement environmental processes into their individual buyer–supplier relationships. We focus in particular on two drivers: The buyer's perceived trust in its supplier, which has been shown to be a significant predictor of supply chain outcomes in B2B settings (del Bosque Rodriguez et al., 2006 and King and Burgess, 2008); and top management support which has consistently been found to be a major driver of GSCM (Drumwright, 1994, Lee, 2008, Walker et al., 2008 and Zhu and Sarkis, 2006). Given the nature of this study, we make three contributions: First, we provide one of the most comprehensive analyses of “green” supply chain management in the U.K. and we explicitly relate and compare GSCM across firms in B2B and B2C sectors. As such, this study extends our understanding of the degree to which GSCM is context dependent. Second, our study furthers existing research in the field of GSCM, which suggests that trust is an important factor for its successful implementation (e.g. Boyd et al., 2007 and Cheng et al., 2008). We therefore contribute to an emerging literature, which suggests that the implementation of GSCM is sensitive to the characteristics of buyer–supplier relationships. Third, we distinguish between industrial, i.e. B2B, and final consumer-oriented, i.e. B2C, supply chains, and compare the extent to which trust, combined with top management support, plays a role in shaping GSCM in both settings. In the following section we briefly review the literature on GSCM and its relationship with both trust and top management support. We then develop a set of testable hypotheses, which encompass trust, top management support and a set of moderating effects. Subsequently, we outline our methodology before presenting a set of results which incorporate descriptive statistics on the relative engagement with GSCM among firms in B2B and B2C sectors, and a set of hierarchical ordinary least square regressions, which explains the role of trust and top management in shaping GSCM. Finally, we discuss the managerial and research implications of our study.