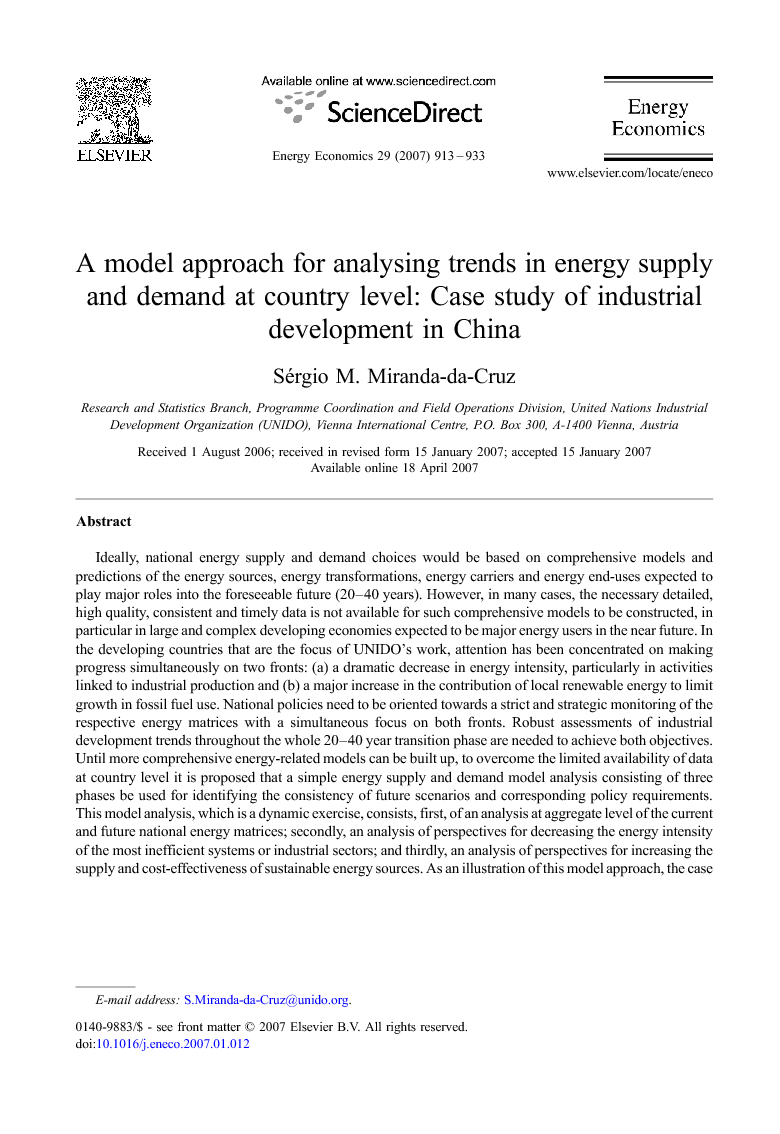 Ideally, national energy supply and demand choices would be based on comprehensive models and predictions of the energy sources, energy transformations, energy carriers and energy end-uses expected to play major roles into the foreseeable future (20–40 years). However, in many cases, the necessary detailed, high quality, consistent and timely data is not available for such comprehensive models to be constructed, in particular in large and complex developing economies expected to be major energy users in the near future. In the developing countries that are the focus of UNIDO's work, attention has been concentrated on making progress simultaneously on two fronts: (a) a dramatic decrease in energy intensity, particularly in activities linked to industrial production and (b) a major increase in the contribution of local renewable energy to limit growth in fossil fuel use. National policies need to be oriented towards a strict and strategic monitoring of the respective energy matrices with a simultaneous focus on both fronts. Robust assessments of industrial development trends throughout the whole 20–40 year transition phase are needed to achieve both objectives. Until more comprehensive energy-related models can be built up, to overcome the limited availability of data at country level it is proposed that a simple energy supply and demand model analysis consisting of three phases be used for identifying the consistency of future scenarios and corresponding policy requirements. This model analysis, which is a dynamic exercise, consists, first, of an analysis at aggregate level of the current and future national energy matrices; secondly, an analysis of perspectives for decreasing the energy intensity of the most inefficient systems or industrial sectors; and thirdly, an analysis of perspectives for increasing the supply and cost-effectiveness of sustainable energy sources. As an illustration of this model approach, the case of China is analysed with emphasis on the industrial sector, followed by a discussion of some of the structural change policies indicated for China to reach its planned energy supply and demand objectives for 2020.

The next 20–40 years will have to be a global transition period to more sustainable energy supply and demand patterns with two major courses simultaneously: a decrease in energy intensity and an increase in the contribution of renewable energy. Robust assessments of likely industrial trends and corresponding indications of energy supply and use throughout this transition phase are necessary to achieve both objectives. To overcome the limited availability and inconsistencies of data in countries being assisted by UNIDO, a simple energy supply and demand model analysis focusing on the corresponding implications in terms of policy has been adopted. The proposed approach should not be perceived as an alternative, but rather as an intermediary step to more traditional and comprehensive energy-related models. This model analysis, which is dynamic and consisting of three phases, can be applied to any economy for assessing the consistency of future scenarios and policy requirements to reduce energy intensity while simultaneously promoting cost-efficient use of sustainable (i.e., renewable) energy sources. The model consists of an analysis at aggregate level of current and future national energy matrices, followed by analyses of the two pillars used to reach the future matrix. The latter consist at an analysis through the energy use optimization cycle of prospects for decreasing the energy intensity of the most inefficient systems or industrial sectors, and another through the energy supply optimization cycle of prospects for increasing the supply and cost-effectiveness of sustainable energy sources. Each cycle is considered from four perspectives: diagnosis and assessment; tech-knowledge absorption and development; policy formulation; and policy implementation. The combination of these three phases, which is proposed to be carried out continuously, as a monitoring mechanism, and involving the sum of expert analysis of individual systems in the country, leads to a systematic assessment of the energy status and prospects for a country. As an illustration of the model approach, the case of China is analysed, and three specific examples were given. They illustrate that the continuous application of the cycles can lead to a reasonable indication of the likelihood of moving successfully from current to future matrices, as well as the required policies to reach some of the key government objectives. The main reason for working with macro and aggregated scenarios in UNIDO's assessments is that waiting for a detailed energy supply and use modelling exercise in the case of large and complex developing economies would lead to years of delay. Furthermore, there would be also a highly questionable degree of confidence in the results from the difficulty of obtaining consistent energy supply and demand data and keeping up with the rapidly developing economic structure and energy systems. Consequently, it would be much more difficult, for UNIDO, to provide timely policy advice in the absence of such reliable, detailed and up-to-date energy supply and use figures to the majority of its Member States on issues where energy is likely to be a constraint for their industrial and overall economic development.