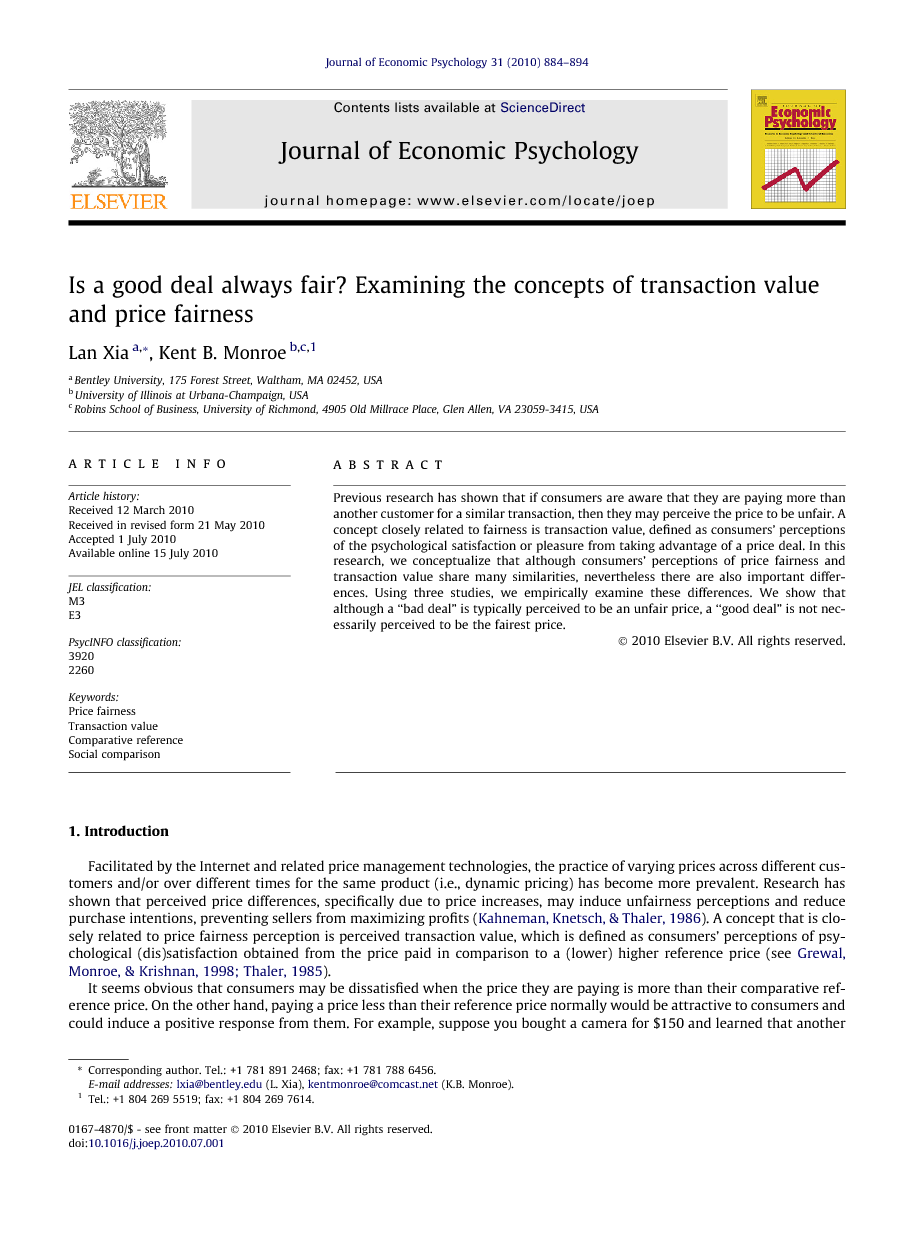 Previous research has shown that if consumers are aware that they are paying more than another customer for a similar transaction, then they may perceive the price to be unfair. A concept closely related to fairness is transaction value, defined as consumers’ perceptions of the psychological satisfaction or pleasure from taking advantage of a price deal. In this research, we conceptualize that although consumers’ perceptions of price fairness and transaction value share many similarities, nevertheless there are also important differences. Using three studies, we empirically examine these differences. We show that although a “bad deal” is typically perceived to be an unfair price, a “good deal” is not necessarily perceived to be the fairest price.

Facilitated by the Internet and related price management technologies, the practice of varying prices across different customers and/or over different times for the same product (i.e., dynamic pricing) has become more prevalent. Research has shown that perceived price differences, specifically due to price increases, may induce unfairness perceptions and reduce purchase intentions, preventing sellers from maximizing profits (Kahneman, Knetsch, & Thaler, 1986). A concept that is closely related to price fairness perception is perceived transaction value, which is defined as consumers’ perceptions of psychological (dis)satisfaction obtained from the price paid in comparison to a (lower) higher reference price (see Grewal et al., 1998 and Thaler, 1985). It seems obvious that consumers may be dissatisfied when the price they are paying is more than their comparative reference price. On the other hand, paying a price less than their reference price normally would be attractive to consumers and could induce a positive response from them. For example, suppose you bought a camera for $150 and learned that another customer purchased the same camera from the same seller on the same day for $190. You are probably happy that you paid a lower price (i.e., experienced positive transaction value). However, do you also think it is fair that the other customer paid a higher price than you? The key question we are asking in this research is whether an apparent good deal (i.e., paying less than others) would always be perceived as fair. If so, then the next question is when would price advantaged consumers perceive a “good deal” to be an unfair or a less fair price? These are the questions we examine in this research. Most price fairness research has focused on the situation when consumers are price disadvantaged (that is, the price they pay is higher than their reference price). Aside from price promotion research considering the sales effects of prices less than a reference price, little research has examined the effects when consumers learn that they are paying less than another customer. By examining the effects of advantaged price inequity, we further extend our knowledge of the effects of price fairness perceptions. More importantly, by comparing and contrasting the concepts of price fairness and transaction value, we offer additional insights into the psychological processes underlying consumers’ evaluations of a price outcome. In the following, we start with a discussion of the price fairness concept. Then we compare and contrast the concepts of fairness and transaction value. Finally, we identify boundary conditions for the different effects of advantaged price inequity on perceptions of fairness and transaction value.

Will a perceived better deal also be perceived as a fairer price? Overall, although counter-intuitive, our research has demonstrated that paying a price that is less than the reference price may be perceived to be less fair when the reference price is a higher price paid by another customer for a similar transaction. In two studies, we demonstrated that in the context of social comparisons, an advantaged price inequity had a negative effect on fairness perceptions. As a result, the good deal does not necessarily convert into higher purchase intentions or willingness to provide positive word-of-mouth as otherwise might be expected. Indeed, it may even negatively influence these behavioral intentions. However, compared to the effect of a disadvantaged price inequity on unfairness perceptions, an advantaged price inequity effect is relatively smaller. The asymmetry effect found demonstrated this difference. Further, we also identified boundary conditions of the negative effect of an advantaged inequity. A good deal is a less fair price only when the reference is another customer and is not disadvantaged relative to other customers at the same time when multiple references are available. Most previous price fairness research has focused on situations when consumers pay a higher price than their reference. We address this gap by examining the effects of an advantaged price inequity and its boundary condition, thus extending our knowledge about consumers’ price fairness perceptions. Second, existing research on price fairness has been focusing on equity between buyer and seller (e.g., the Dual Entitlement Principle and the effect of inferred motive). We demonstrate that social comparisons have a crucial role in fairness perceptions both when consumers are price disadvantaged and advantaged. By incorporating other buyers into the comparison process, we extend the price fairness framework for further research. Third, the question of whether a good deal is a fair deal represents a potential conflict between what consumers would prefer and what they may think is the right thing. Hence this research offers an interesting scenario to examine the similarities and subtle differences between perceptions of fairness and transaction value. Results showed that while a disadvantaged price inequity is perceived to be unfair as well as producing negative transaction value, an advantaged price inequity while producing positive transaction value, nevertheless was perceived to be less fair than paying an equal price under certain circumstances. Our findings shed light on the psychological processes underlying the intriguing interplay between consumers’ preferences and fairness considerations when evaluating outcomes. Although the differences are subtle and effects are relatively small, these distinctions are theoretically and practically important. In addition to contributing to our overall understanding of perceived price fairness, our research also suggests important managerial implications. Price fairness has long been recognized as a constraint for corporations’ profit seeking activities. However, research has been focused on consumers who are being disadvantaged and their reactions to price increases. Implicitly, we assume that consumers who are on the other end of the stick will be happy and the price advantage will have a positive impact on their behavioral intentions. Our results showed that it is not necessarily the case. When perceived high transaction value due to advantaged prices is accompanied with a perception of unfairness, such an advantage may not necessarily lead to the expected positive behavioral consequences. Sellers routinely offer preferential treatment to some customers as a reward and to encourage loyalty and positive word-of-mouth. Our results imply that it is important to separate customers who are rewarded from other customers who do not qualify for the reward or advantage to minimize negative effects due to social comparisons. From the consumers’ perspective, research has shown that consumers care about what other customers are paying (Ackerman and Perner, 2004, Feinberg et al., 2002 and Midgely, 1983). Today, with online chat rooms, forums, consumer blogs, various social networks (Bickart & Schindler, 2001) and traditional market mavens (Feick & Price, 1987), it is likely that many consumers do know when they pay more or less than a comparative reference. Thus, it may help to provide customers with a good rationale for the preferential treatment, such as stating that only loyal customers or customers with special status (e.g., senior citizens) have the opportunity to receive a lower price. Such a rationale may reduce the potential uneasy feeling, thereby reducing any potential negative effect of being price advantaged. Xia et al. (2004) suggest that combining price variations with customization or personalization of products and services may reduce comparability between transactions, hence unfairness perceptions rising from price differences. This principle also applies to advantaged prices. Reducing the unfairness perceptions associated with advantaged inequity will ensure the positive behavior consequences led by the price advantage.