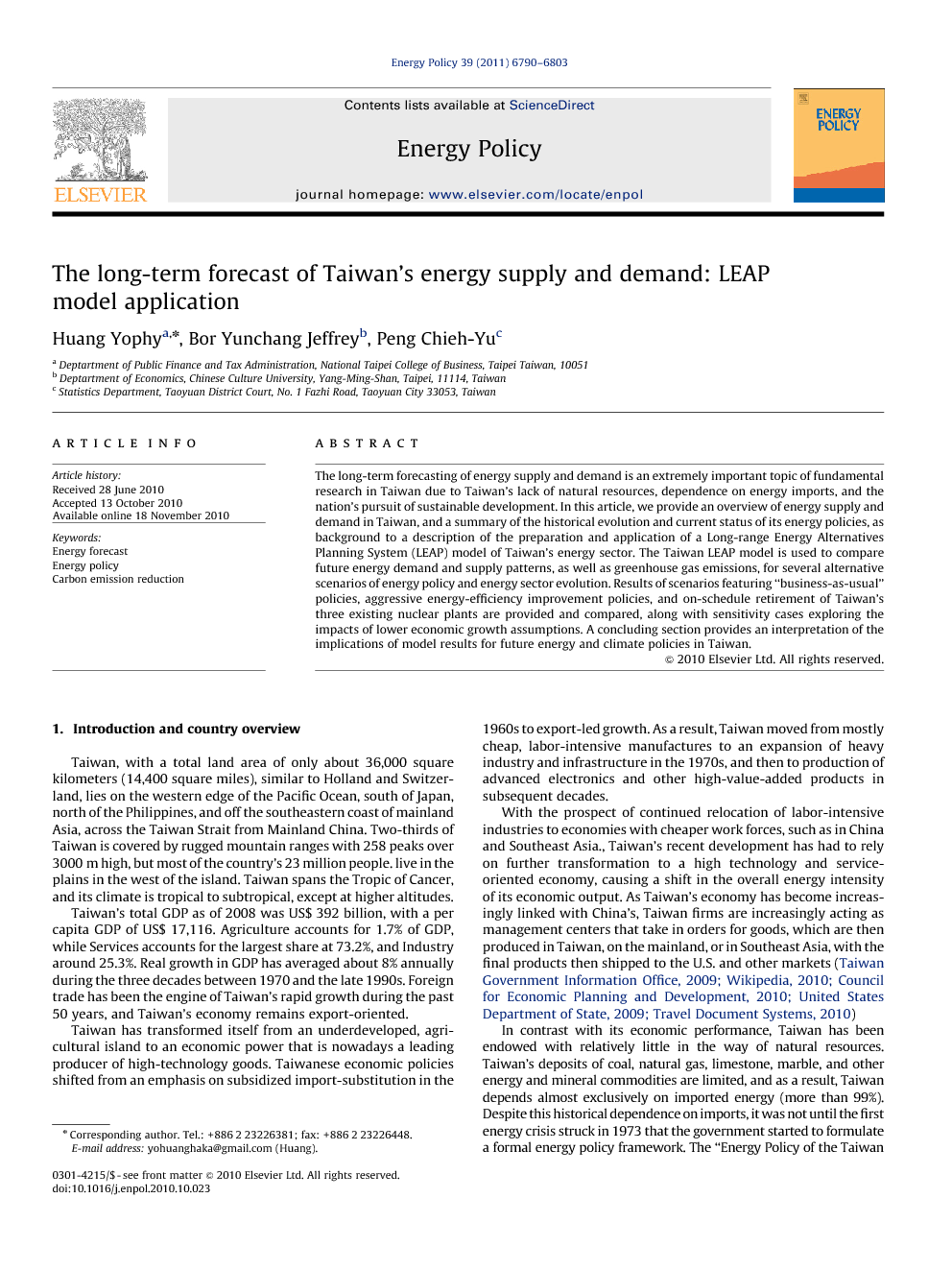 The long-term forecasting of energy supply and demand is an extremely important topic of fundamental research in Taiwan due to Taiwan’s lack of natural resources, dependence on energy imports, and the nation’s pursuit of sustainable development. In this article, we provide an overview of energy supply and demand in Taiwan, and a summary of the historical evolution and current status of its energy policies, as background to a description of the preparation and application of a Long-range Energy Alternatives Planning System (LEAP) model of Taiwan’s energy sector. The Taiwan LEAP model is used to compare future energy demand and supply patterns, as well as greenhouse gas emissions, for several alternative scenarios of energy policy and energy sector evolution. Results of scenarios featuring “business-as-usual” policies, aggressive energy-efficiency improvement policies, and on-schedule retirement of Taiwan’s three existing nuclear plants are provided and compared, along with sensitivity cases exploring the impacts of lower economic growth assumptions. A concluding section provides an interpretation of the implications of model results for future energy and climate policies in Taiwan.

Some of the many advantages of the LEAP Model are that it allows users to build energy forecast systems based on existing energy demand and supply data, to prepare and compare different long-run scenarios, and to compare results with those of other countries or economies that apply the LEAP model using a common approach (cross-sectional analysis). This comparison helps to identify those energy policies that have better effects on energy conservation, greenhouse gas abatement, or other attributes. The assembly of LEAP models, in different countries can help analysts and policymakers to identify a positive and aggressive energy and environmental policies on the international scale, thus catalyzing further cooperation and efforts in coping with potential energy issues from the standpoint of “global villages”. In this article, we describe the assembly of a first version of Taiwan’s LEAP model, and use it to compare the energy demand of BAU (assuming current trends and government plans), GOV (enhancing energy efficiency by over 2% annually through 2025), FIN (a sensitivity case assuming the financial tsunami’s far-reaching negative effects on Taiwan’s economic growth), RET (assuming that the existing three nuclear power plants are retired as scheduled, but not replaced), and ALL (all of the above three cases combined). We find that the retirement of existing nuclear power plants as scheduled (RET) has a negative impact on energy supply (increasing the need for coal, for example) and results in an increase in CO2 emissions. The rest of the scenarios result in significantly reduced energy demand by 2030, in which the ALL case, combining energy efficiency with an assumption of lower economic growth, results in the greatest reductions, followed by the GOV case. The FIN case has less effect on energy consumption than the GOV or ALL cases, indicating that lowered economic growth is likely to have less effect on energy demand than aggressive policies to change energy consumption behavior patterns. In terms of carbon dioxide emissions projections for 2030, the ALL case shows the least emissions followed by the GOV case, while the carbon dioxide emissions in the RET will be higher than in the BAU case. Fig. 21, Fig. 22 and Fig. 23 show comparisons between the BAU case and the other scenarios with regard to changes in energy demand, energy conversion, and carbon dioxide emissions over time, in a form somewhat different from the previous section so as to enable results of all three scenarios to be viewed together. The policy implications for Taiwan of the modeling results described above are as follows. First, unless alternative energy sources can be developed to fill the gap, nuclear power is a must in Taiwan’s energy agenda in coping with global warming. Bringing the fourth nuclear power plant on line by 2012 will have a significant impact in reducing emissions, because the power it provides will offset coal- and gas-fired generation. Second, as Taiwan lacks indigenous energy resources and imports 99% of its energy supplies, the finding of these LEAP simulations confirms that the most effective energy policy is to adopt demand-side management (DSM); for example, through an aggressive energy-conservation policy and adoption of reasonable energy pricing to provide incentives for energy efficiency and conservation. This study verifies that increasing energy efficiency by 2% annually, supported and made possible by adoption of an executive master plan for energy followed up by the development and adoption of effective energy conservation policies in Taiwan, will work to significantly reduce CO2 emissions and the level of Taiwan’s energy imports. Implementing this aggressive energy-efficiency policy, however, will require a concerted, determined, and persistent effort on the part of both Taiwan’s government and private sector. Third, in the long run, letting Taiwan’s energy prices float in line with world energy prices and adjusting them to reflect intergenerational costs and external costs would be very important steps in providing an incentive for energy conservation. With the passage of the Renewable Energy Act in June 2009, and the Greenhouse Gas Abatement Act, which is in the process of being ratified by the Legislative Yuan, together with potential energy prices hikes in the near future, Taiwan will have to adopt a series of demand-side management (DSM) policies to deal with energy and environmental issues. Other elements such as the completion (or not) of the fourth nuclear power plant (for example, by 2012) might have a further impact on Taiwan’s structure and level of energy supply. It will therefore be very meaningful and useful to track how these energy policies will affect the energy demand and supply in the long run through further use, adaptation, and elaboration of the newly established Taiwan LEAP Model.