عنوان انگلیسی
Lithium availability in the EU27 for battery-driven vehicles: The impact of recycling and substitution on the confrontation between supply and demand until2050
دانلود فوری مقاله + سفارش ترجمه 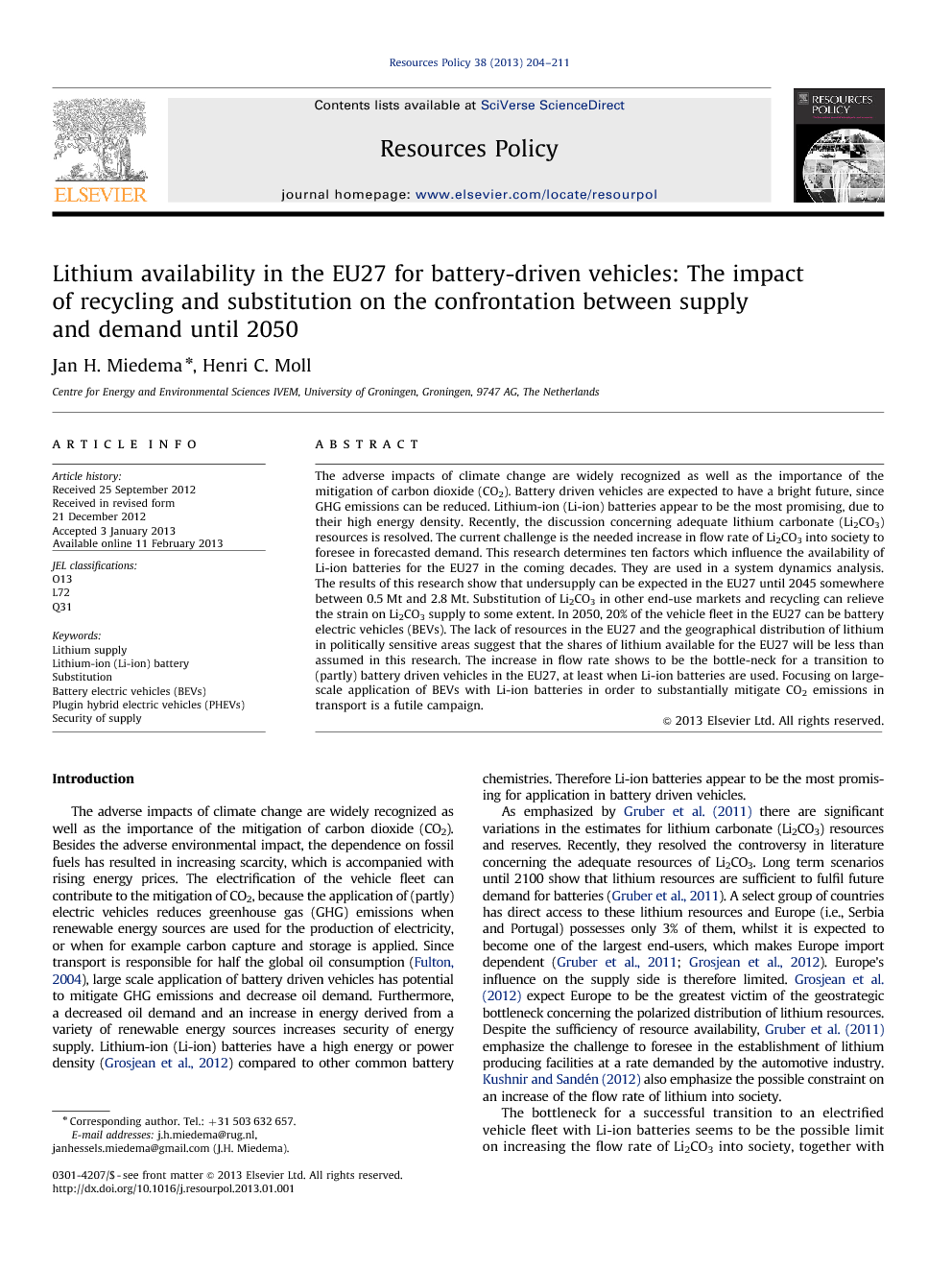 The adverse impacts of climate change are widely recognized as well as the importance of the mitigation of carbon dioxide (CO2). Battery driven vehicles are expected to have a bright future, since GHG emissions can be reduced. Lithium-ion (Li-ion) batteries appear to be the most promising, due to their high energy density. Recently, the discussion concerning adequate lithium carbonate (Li2CO3) resources is resolved. The current challenge is the needed increase in flow rate of Li2CO3 into society to foresee in forecasted demand. This research determines ten factors which influence the availability of Li-ion batteries for the EU27 in the coming decades. They are used in a system dynamics analysis. The results of this research show that undersupply can be expected in the EU27 until 2045 somewhere between 0.5 Mt and 2.8 Mt. Substitution of Li2CO3 in other end-use markets and recycling can relieve the strain on Li2CO3 supply to some extent. In 2050, 20% of the vehicle fleet in the EU27 can be battery electric vehicles (BEVs). The lack of resources in the EU27 and the geographical distribution of lithium in politically sensitive areas suggest that the shares of lithium available for the EU27 will be less than assumed in this research. The increase in flow rate shows to be the bottle-neck for a transition to (partly) battery driven vehicles in the EU27, at least when Li-ion batteries are used. Focusing on large-scale application of BEVs with Li-ion batteries in order to substantially mitigate CO2 emissions in transport is a futile campaign.

The adverse impacts of climate change are widely recognized as well as the importance of the mitigation of carbon dioxide (CO2). Besides the adverse environmental impact, the dependence on fossil fuels has resulted in increasing scarcity, which is accompanied with rising energy prices. The electrification of the vehicle fleet can contribute to the mitigation of CO2, because the application of (partly) electric vehicles reduces greenhouse gas (GHG) emissions when renewable energy sources are used for the production of electricity, or when for example carbon capture and storage is applied. Since transport is responsible for half the global oil consumption (Fulton, 2004), large scale application of battery driven vehicles has potential to mitigate GHG emissions and decrease oil demand. Furthermore, a decreased oil demand and an increase in energy derived from a variety of renewable energy sources increases security of energy supply. Lithium-ion (Li-ion) batteries have a high energy or power density (Grosjean et al., 2012) compared to other common battery chemistries. Therefore Li-ion batteries appear to be the most promising for application in battery driven vehicles. As emphasized by Gruber et al. (2011) there are significant variations in the estimates for lithium carbonate (Li2CO3) resources and reserves. Recently, they resolved the controversy in literature concerning the adequate resources of Li2CO3. Long term scenarios until 2100 show that lithium resources are sufficient to fulfil future demand for batteries (Gruber et al., 2011). A select group of countries has direct access to these lithium resources and Europe (i.e., Serbia and Portugal) possesses only 3% of them, whilst it is expected to become one of the largest end-users, which makes Europe import dependent (Gruber et al., 2011 and Grosjean et al., 2012). Europe’s influence on the supply side is therefore limited. Grosjean et al. (2012) expect Europe to be the greatest victim of the geostrategic bottleneck concerning the polarized distribution of lithium resources. Despite the sufficiency of resource availability, Gruber et al. (2011) emphasize the challenge to foresee in the establishment of lithium producing facilities at a rate demanded by the automotive industry. Kushnir and Sandén (2012) also emphasize the possible constraint on an increase of the flow rate of lithium into society. The bottleneck for a successful transition to an electrified vehicle fleet with Li-ion batteries seems to be the possible limit on increasing the flow rate of Li2CO3 into society, together with the share of the Li2CO3 flow available for car batteries, which are both still subject to discussion. The main aim of this research is to analyse the confrontation between supply and demand for Li2CO3 in the 27 member states of the European Union (EU27) until 2050 for a penetration scenario of (partly) electric vehicles and draw conclusions about the feasibility of such a scenario. A system dynamics analysis is commonly used to study the complexity of a systems’ stocks, flows and feedback loops over time. Such studies are not done so far with regard to the lithium availability for large scale introduction scenarios of battery drivencars. A system dynamics analysis starts with the identification of the drivers and factors that influence the system. Ten factors can be indicated for the case of lithium availability for large scale introduction scenarios of battery driven cars, namely trends in Li2CO3 production (1), the production trends of battery driven vehicles for the EU27 (2), the lithium requirements per kW h battery capacity (3), the range of a battery driven vehicle (4), trends in battery recycling and lithium recovery (5), the share of Li2CO3 available for the EU27 (6), the lifetime of a battery (7), the share of Li2CO3 available for vehicle batteries (8), trends in other end-use markets of lithium (9)and substitution of lithium in other end-uses (10). These factors are analysed in order to resolve whether the global lithium resources are enough to fulfil the ambitious targets set out by the EU. The technological factors in the system are chosen quite optimistic which should result in an estimate for the lower boundaries in lithium demand belonging to the chosen scenario. In order to approach these factors a supply forecast curve has been developed. Subsequently, vehicle developments in the EU27 and recycling rates have been analysed. The size of other lithium end-use markets has been estimated and the share of substitutable lithium in these markets has been determined. This article is organized as follows. First the further outlining of the research context, followed by a description of the developed model and scenarios, the associated results discussing the impact of substitution and recycling and the feasibility of a full electric scenario, a discussion including a sensitivity analysis and a thought experiment addressing the application of plugin hybrid electric vehicles (PHEVs) at the cost of battery electric vehicles (BEVs) and a concluding section which reflects on the constraints concerning lithium supply in the coming decades.

The confrontation between supply and demand for Li2CO3 in the coming decades has been studied with a system dynamics analysis. The results show that the share of lithium to be available for batteries on a global scale is significant. The share available for the EU27 is not; obtaining approximately one-fifth at some stage in time is necessary, but not probable when the optimistic natures of several model assumptions done during this research are taken into account. The best case scenario estimates a 45 fold increase in Li2CO3 supply in 50 years. As shown this ultimately results in an excess in supply (Fig. 4). The coming decades however present a distinct undersupply even though an average of 8% increase in production per annum is assumed, which is similar to a decadal doubling of the production. Increases in production are stemmed by the fact that these are largely brine dependent. Hence, putting a new facility into production can take a decade. Undersupply is a serious risk in the coming decades. A faster increase in the Li2CO3 flow rate than estimated in the BC scenario seems improbable. Besides this, a globally binding climate convention cannot count on a significant reduction in GHG emissions based on the large scale adoption of Li-ion battery driven vehicles. The impact of recycling is small in the first decades, due to rapid increases in demand and a relatively small waste stream available for recycling. On the longer term the impact of recycling increases. When substitution is applied on a large scale, this could compensate for recycling and alleviate the strain on the undersupply in theEU27. If the supply curve is sound, 20% of the European vehicle fleet can be BEVs in 2050. Instead of 20% BEVs, a 100% PHEV adoption scenario is also feasible requiring less Li2CO3 and only 63% of the gasoline demand. This results in postponing the timeframe of undersupply, which suggests that the optimal adoption of BEVs should be gradual, since rapid large scale application of BEVs is not feasible. Therefore the large scale adoption of PHEVs in a transitioning phase, until Li2CO3 is produced on a large scale (at least 45 times the 2000 production rate), would decrease the strain on the production in the coming decades and would also decrease the gasoline demand. This can be followed by large-scale adoption of BEVs, but this will require some long-term coordination to prevent for undersupply. When transitioning to an electrified vehicle fleet the aim should be to not become dependent on another single material. The lack of resources in the EU27 and the geographical distribution of lithium in politically sensitive areas suggest that the shares of lithium available for the EU27 in the coming decades will be lower than the assumed shares in this research. Combined with the optimistic technological assumptions done in this research it shows that the flow rate of lithium into society and specifically the increase in flow rate is the bottle-neck for a transition to (partly) battery driven vehicles in the EU27, at least when Li-ion batteries are used. Focusing on large-scale application of BEVs with Li-ion batteries in order to substantially mitigate CO2 emissions in transport is a futile campaign and will result in a shift from energy to material dependency at least on a Europeanscale.