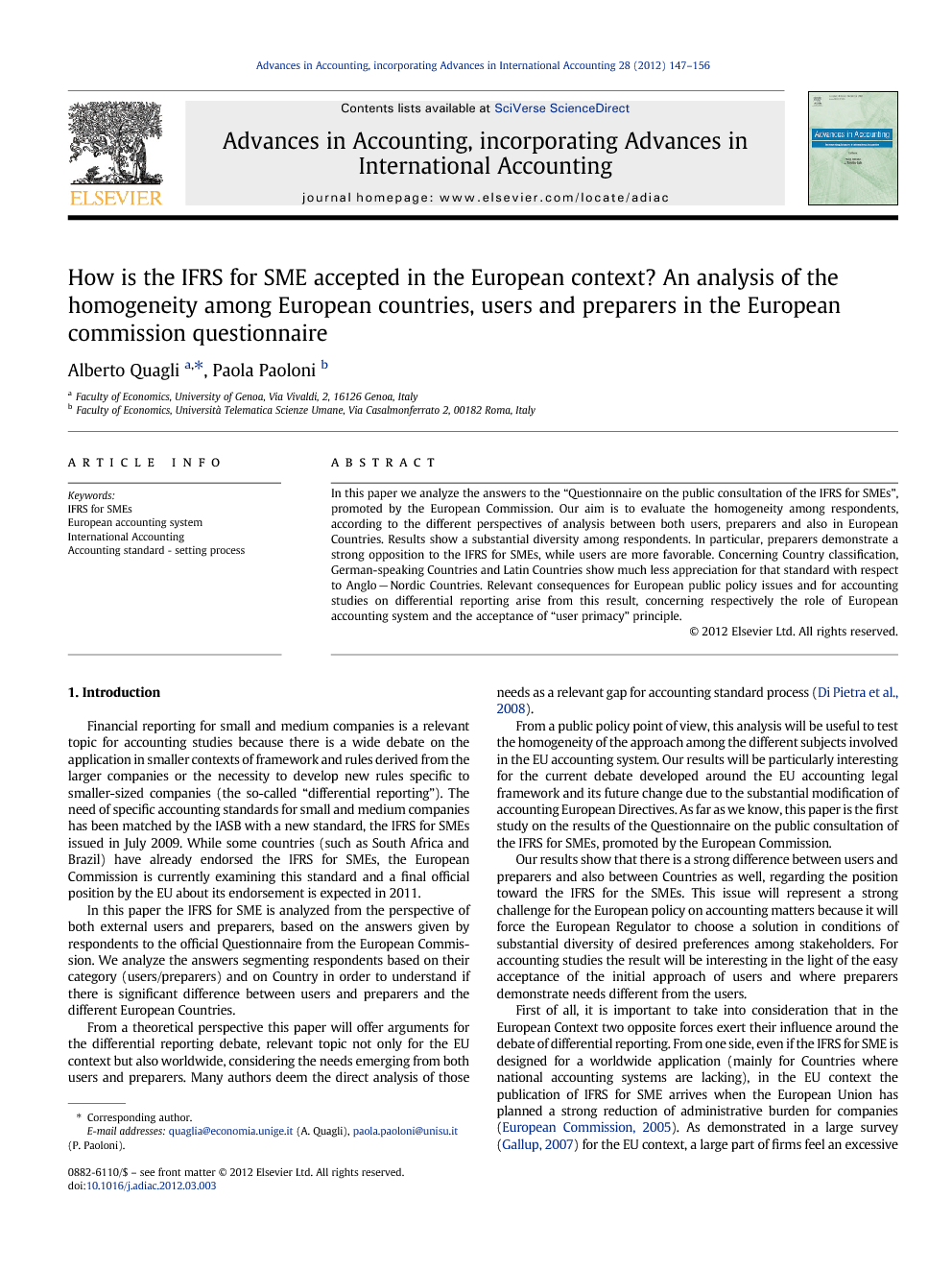 In this paper we analyze the answers to the “Questionnaire on the public consultation of the IFRS for SMEs”, promoted by the European Commission. Our aim is to evaluate the homogeneity among respondents, according to the different perspectives of analysis between both users, preparers and also in European Countries. Results show a substantial diversity among respondents. In particular, preparers demonstrate a strong opposition to the IFRS for SMEs, while users are more favorable. Concerning Country classification, German-speaking Countries and Latin Countries show much less appreciation for that standard with respect to Anglo − Nordic Countries. Relevant consequences for European public policy issues and for accounting studies on differential reporting arise from this result, concerning respectively the role of European accounting system and the acceptance of “user primacy” principle.

Financial reporting for small and medium companies is a relevant topic for accounting studies because there is a wide debate on the application in smaller contexts of framework and rules derived from the larger companies or the necessity to develop new rules specific to smaller-sized companies (the so-called “differential reporting”). The need of specific accounting standards for small and medium companies has been matched by the IASB with a new standard, the IFRS for SMEs issued in July 2009. While some countries (such as South Africa and Brazil) have already endorsed the IFRS for SMEs, the European Commission is currently examining this standard and a final official position by the EU about its endorsement is expected in 2011. In this paper the IFRS for SME is analyzed from the perspective of both external users and preparers, based on the answers given by respondents to the official Questionnaire from the European Commission. We analyze the answers segmenting respondents based on their category (users/preparers) and on Country in order to understand if there is significant difference between users and preparers and the different European Countries. From a theoretical perspective this paper will offer arguments for the differential reporting debate, relevant topic not only for the EU context but also worldwide, considering the needs emerging from both users and preparers. Many authors deem the direct analysis of those needs as a relevant gap for accounting standard process (Di Pietra et al., 2008). From a public policy point of view, this analysis will be useful to test the homogeneity of the approach among the different subjects involved in the EU accounting system. Our results will be particularly interesting for the current debate developed around the EU accounting legal framework and its future change due to the substantial modification of accounting European Directives. As far as we know, this paper is the first study on the results of the Questionnaire on the public consultation of the IFRS for SMEs, promoted by the European Commission. Our results show that there is a strong difference between users and preparers and also between Countries as well, regarding the position toward the IFRS for the SMEs. This issue will represent a strong challenge for the European policy on accounting matters because it will force the European Regulator to choose a solution in conditions of substantial diversity of desired preferences among stakeholders. For accounting studies the result will be interesting in the light of the easy acceptance of the initial approach of users and where preparers demonstrate needs different from the users. First of all, it is important to take into consideration that in the European Context two opposite forces exert their influence around the debate of differential reporting. From one side, even if the IFRS for SME is designed for a worldwide application (mainly for Countries where national accounting systems are lacking), in the EU context the publication of IFRS for SME arrives when the European Union has planned a strong reduction of administrative burden for companies (European Commission, 2005). As demonstrated in a large survey (Gallup, 2007) for the EU context, a large part of firms feel an excessive burden in applying the system of rules developed by the European Commission. In this way, the IFRS for SME could find a good acceptance because they resemble a simplification of the full IFRS. On the other hand, the EU has for a longtime adopted some Directives to harmonize financial statements among the Member States. After the endorsement of full IFRS for publicly listed companies in 2002 and continuously updated Directives for national harmonized regulations, the adoption also of a third option, the IFRS for SME could generate excessive confusion at a macro-level of the whole accounting system for European companies. Having taken into account the above two premises, the evaluation about the standard that emerged from the Questionnaire is not unidirectional, depending on the starting point of comparison. If the operators judge the IFRS for SMEs using the lens of the full IFRS, a strong simplification is acknowledged. For those operators who express their opinions considering the current EU accounting system based on the IV and the VII Directives, the evaluation is quite different: the IFRS for SME seems still too complex and for the majority, unnecessary.

The limitations of this study concern some methodological issues. First, in an open questionnaire there is a risk of self-selection bias of the respondents (e.g. opposite people are the most likely participants to the questionnaire). Second, numbers of respondents are not so high (we use 24 users and 81 preparers) and we attribute the same weight to association representing a large numbers of respondents and single entities. Concerning theoretical implications, our study confirms some impressions contained in SME financial reporting literature. There is a confirmation of weak participation of the users as noted at the first stages of the IFRS for SMEs setting process (Paoloni, 2006 and Schiebel, 2007), even though they are the stakeholders whose needs are addressed by the standard itself. Moreover, the above analysis of comments given by users demonstrates that the IFRS for SMEs has not until now succeeded in satisfying the user needs, enforcing doubts cast by some scholars on the real understanding of the user world (Durocher and Gendron, 2011 and Young, 2006), especially if referred to SMEs' financial reporting (Di Pietra et al., 2008). Respondents call for a SME financial reporting framework, as solicited by several scholars and practitioners (American Institute of Certified Public Accountants, 2005, February 28, Di Pietra et al., 2008 and Sinnett and de Mesa Graziano, 2006). The differences among Countries theorized by international accounting literature (Nobes, 1983) are confirmed as well by our analysis: accounting culture and economic environment seem very relevant in differentiating the answers with German-speaking and Latin Countries from one side and Anglo–Nordic from the other side. As an element of progress, our study poses to theory the relevant challenge originated by different views between preparers and users. According to the “user primacy” principle, no match should exist and user perspective should be preferred in standard setting process and its consequent endorsement. The case of SMEs financial reporting is an environment too particular for the aseptic use of the classic “user primacy” perspective. First, in practical terms, the main users of a SME financial statement are banks which have a great power to acquire any other detailed information they want from the SME, even if not included in the registered financial reports. Second, SMEs accounting standard, such as the IFRS for SMEs, rise with the declared goal to reduce the administrative charges for the preparers, so it is implicit the search of an equilibrium between user need satisfaction and preparers real capabilities to develop a suitable financial reporting. This equilibrium seems far from being found. Accounting theory, in our opinion, has to produce more efforts to develop an accounting framework more comprehensive, where preparers and not only users, are taken in account to define the objectives of financial reporting. This last point concerns also public policy issues. EU Commission will have to decide in a few months the endorsement of the IFRS for SMEs and a subtle equilibrium between user need satisfaction and preparer perspective have to be searched for. This is the most relevant public policy issue that emerged in our study. There are other challenges to EU Commission posed by the respondents. First, we have demonstrated a strong fracture between different groups of EU Countries concerning the appreciation of the IFRS for SMEs, reflecting a more general problem of intra-EU alignment, very evident also in other, non accounting, domains. Finally, many respondents call for a new accounting strategy, 30 years after the first harmonization. There is a strong need of an European accounting framework, not conditioned by other “private” frameworks, considering the specifics of both public and non public companies, and careful to the peculiarities of the company size. In this sense, European accounting scholars are called now to be involved in a wider debate than narrow investigations about accounting technicalities.