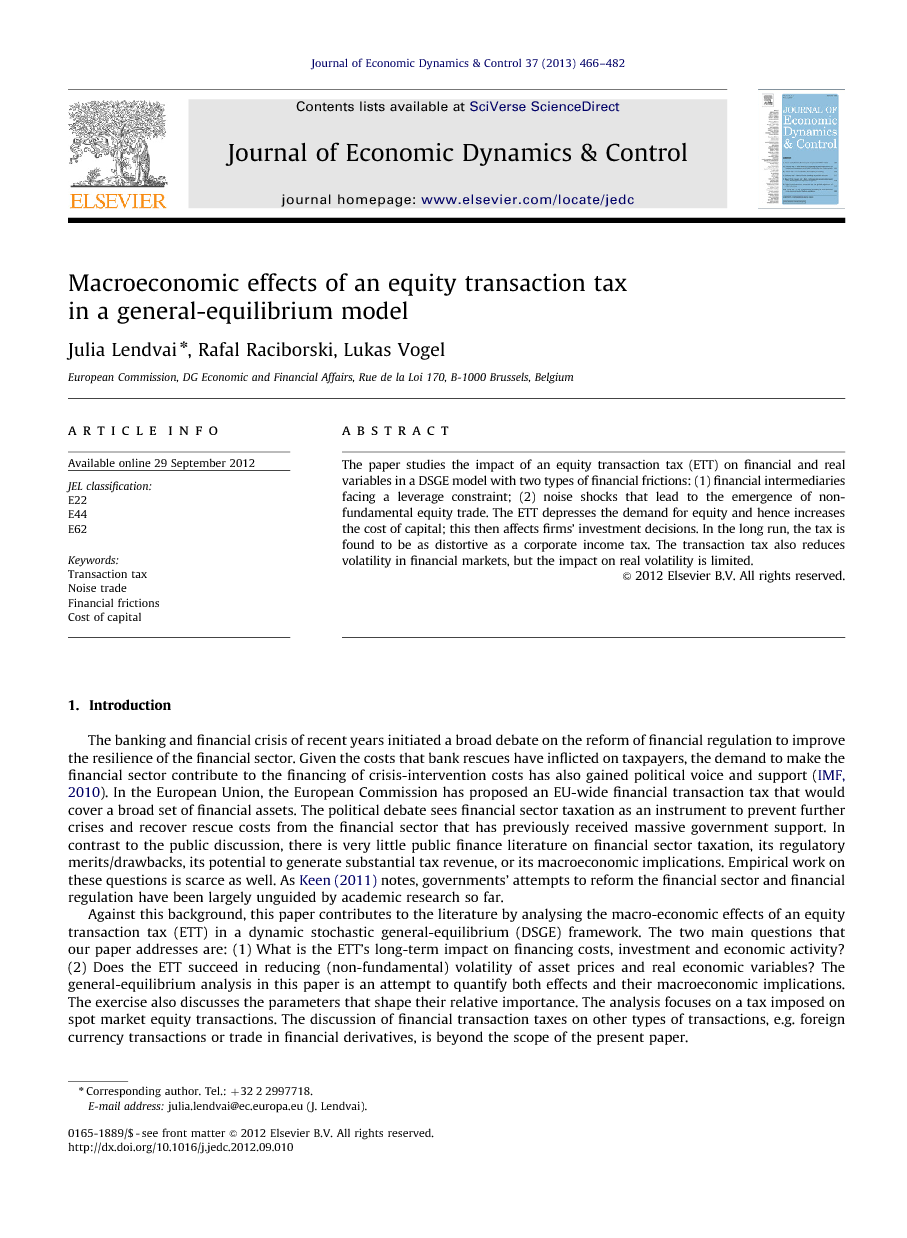 The paper studies the impact of an equity transaction tax (ETT) on financial and real variables in a DSGE model with two types of financial frictions: (1) financial intermediaries facing a leverage constraint; (2) noise shocks that lead to the emergence of non-fundamental equity trade. The ETT depresses the demand for equity and hence increases the cost of capital; this then affects firms' investment decisions. In the long run, the tax is found to be as distortive as a corporate income tax. The transaction tax also reduces volatility in financial markets, but the impact on real volatility is limited.

Theoretical work to assess the impact of financial transaction taxes on the real economy is scarce, and papers that make such attempt (Kupiec, 1996 and Song and Zhang, 2005) use partial-equilibrium frameworks. To the best of our knowledge, the only paper analysing the impact of a transaction tax with non-fundamental volatility (noise trading) in a general-equilibrium framework is Xu (2010) who does, however, focus on the foreign exchange market and does not consider financial market imperfections beyond the presence of noise traders. Few papers address the impact of financial transaction taxes on asset prices and the real economy. Matheson (2011) uses a simple formula to assess the effects of a transaction tax on equity prices for given interest rates and dividends. Against this background, the paper integrates one type of financial transaction tax, namely a tax on equity transactions (ETT), into a coherent DSGE framework. The model develops the interaction between the financial and non-financial sectors of the economy and allows for non-fundamental (noise) trade in equity markets. The model illustrates two effects of an ETT on the economy. On the one hand, the ETT increases the cost of capital and, hence, reduces levels of investment, capital and output. On the other hand, it can dampen the excess volatility associated with non-fundamental trading. Simulations with the benchmark model suggest that an ETT generating tax revenue of 0.1% of GDP would: (1) reduce physical investment and the capital stock by circa 0.5% in the long run, implying a long-term 0.2% decline in real GDP, and (2) reduce the volatility of financial variables, while having little impact on the volatility of non-financial variables. The first finding is in line with empirical studies that have analysed the impact of stamp duties and financial transaction costs on asset prices and financing costs (e.g., Bond et al., 2005, Jackson and O'Donnell, 1985, Umlauf, 1993 and Westerholm, 2003). On the other hand, our finding that an ETT reduces the volatility on financial markets appears optimistic in view of the empirical research that tends to reach the opposite conclusion (e.g., Hau, 2006). A part of the discrepancy may be linked to the fact that our model confines the ETT to non-fundamental equity transactions, whereas transaction taxes in practice apply to fundamental and non-fundamental transactions alike. The output loss associated with an ETT in our model has the same magnitude as the output loss from a corporate tax increase that would generate identical additional tax revenue. Hence, the ETT is as distortive as a direct tax on capital in our model despite being limited to the non-fundamental part of equity transactions. The sensitivity checks in the paper confirm the robustness of our results for deviations from the benchmark parameterisation of the model. The model in the paper makes a number of simplifying assumptions that may be relaxed in further work. The representative household framework, e.g., precludes an analysis of the distributional impact of financial transaction taxes. The distinction between noise traders and rational traders as implemented in the model excludes a contagion of expectations in the sense of rational traders having some faith in the non-fundamental signals. The behaviour of rational traders in our framework is contrarian to the behaviour of noise traders. A modified setup, in which rational traders (partly) follow the noisy information, would amplify boom–bust behaviour in the aggregate and potentially strengthen the stabilising role of transaction taxes. Future work may also aim at an explicit welfare analysis.