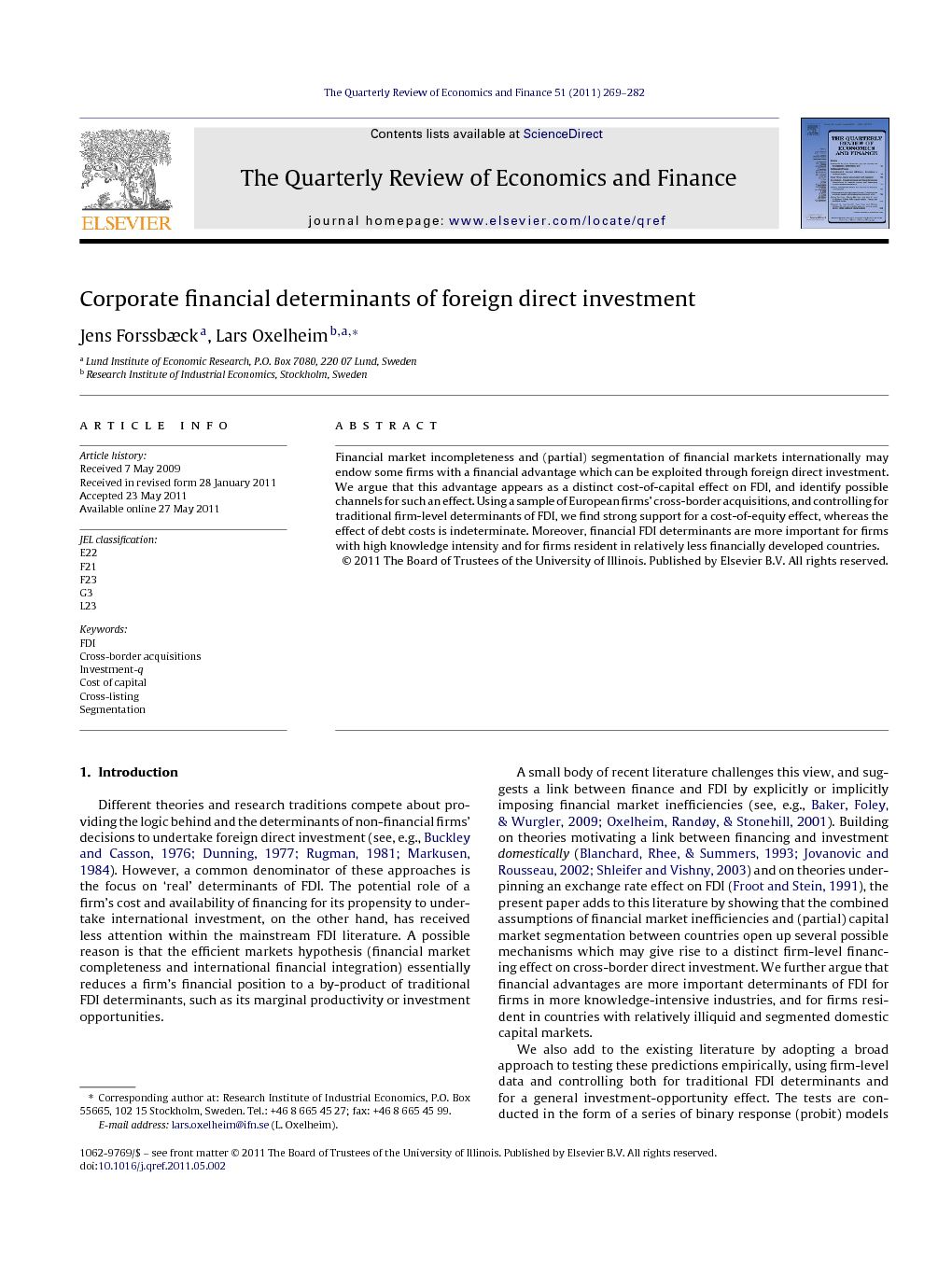 Financial market incompleteness and (partial) segmentation of financial markets internationally may endow some firms with a financial advantage which can be exploited through foreign direct investment. We argue that this advantage appears as a distinct cost-of-capital effect on FDI, and identify possible channels for such an effect. Using a sample of European firms’ cross-border acquisitions, and controlling for traditional firm-level determinants of FDI, we find strong support for a cost-of-equity effect, whereas the effect of debt costs is indeterminate. Moreover, financial FDI determinants are more important for firms with high knowledge intensity and for firms resident in relatively less financially developed countries.

Different theories and research traditions compete about providing the logic behind and the determinants of non-financial firms’ decisions to undertake foreign direct investment (see, e.g., Buckley and Casson, 1976, Dunning, 1977, Rugman, 1981 and Markusen, 1984). However, a common denominator of these approaches is the focus on ‘real’ determinants of FDI. The potential role of a firm's cost and availability of financing for its propensity to undertake international investment, on the other hand, has received less attention within the mainstream FDI literature. A possible reason is that the efficient markets hypothesis (financial market completeness and international financial integration) essentially reduces a firm's financial position to a by-product of traditional FDI determinants, such as its marginal productivity or investment opportunities. A small body of recent literature challenges this view, and suggests a link between finance and FDI by explicitly or implicitly imposing financial market inefficiencies (see, e.g., Baker et al., 2009 and Oxelheim et al., 2001). Building on theories motivating a link between financing and investment domestically ( Blanchard et al., 1993, Jovanovic and Rousseau, 2002 and Shleifer and Vishny, 2003) and on theories underpinning an exchange rate effect on FDI (Froot and Stein, 1991), the present paper adds to this literature by showing that the combined assumptions of financial market inefficiencies and (partial) capital market segmentation between countries open up several possible mechanisms which may give rise to a distinct firm-level financing effect on cross-border direct investment. We further argue that financial advantages are more important determinants of FDI for firms in more knowledge-intensive industries, and for firms resident in countries with relatively illiquid and segmented domestic capital markets. We also add to the existing literature by adopting a broad approach to testing these predictions empirically, using firm-level data and controlling both for traditional FDI determinants and for a general investment-opportunity effect. The tests are conducted in the form of a series of binary response (probit) models testing the effect of financial characteristics on the probability of undertaking FDI, using a sample of approximately 1400 European non-financial firms’ cross-border acquisitions in a total of 44 target markets. The results reveal a consistently significant explanatory power of equity-related financial variables over a number of different specifications, and regardless of the proxy used for equity market valuation. The effect of debt costs, on the other hand, is indeterminate. The hypothesis that financial motivations for FDI are stronger for more knowledge-intensive firms receives strong support from the data, whereas a more general systematic variation in FDI-finance sensitivity by industry could not be detected. As hypothesized, financial determinants also prove to be more important for firms originating in countries that are relatively less financially developed. Finally, the importance of financial explanations of cross-border direct investment is confirmed in a number of robustness tests. The article is organized in the following way. Section 2 outlines a number of mechanisms whereby financial factors can be identified as independent drivers of FDI. Section 3 presents the empirical methodology. In Section 4 we present the variables and the dataset. Results are presented and discussed in Section 5, and Section 6 concludes.

In this paper we have argued that the assumption of (at least partial) international capital market segmentation opens up a number of possible mechanisms for a direct cost-of-capital effect on firms’ incentives to undertake foreign investment projects. The paper adds to recent research suggesting links between firms’ financing and cross-border investment (e.g., Baker et al., 2009 and Oxelheim et al., 2001) by testing the effect of a larger set of firm-level financial characteristics while controlling for traditional firm-level FDI determinants, by correcting the cost of equity measures used for a general investment opportunity effect, and by conditioning the finance-FDI effect on both knowledge intensity and industry and on home-country financial development. Based on binary-response regressions on a sample of European non-financial firms and their foreign acquisitions, we found strong evidence in favor of an independent equity-valuation effect on acquisition FDI. Key equity-related financial variables turned out to be equally important as, or more important than, several conventional firm-level determinants of FDI. Specifically, our results show that firms with more highly valued equity, and firms which have recently cross-listed their equity on a large and liquid stock exchange, are more likely to make foreign acquisitions. These results are qualitatively robust to alternative model specifications and largely independent of the measure for equity costs used. The effects on foreign acquisition likelihood of financial characteristics not directly related to equity, however, appear to be marginal. The effects of debt costs and internal financing are, overall, indeterminate, and usually statistically insignificant. Our proxy for credit worthiness, on the other hand, is often statistically significant, but typically small in economic terms. Also in line with arguments made in the paper is the finding that financial motives for FDI are significantly stronger for more knowledge-intensive firms. Finally, we found support for our hypothesis that financial determinants are more important for firms originating in countries that are relatively less financially developed. Again, it is primarily the sensitivity of FDI to equity costs that is affected by knowledge intensity and home-country financial development. Our conclusion is that an explicit consideration of firms’ financial positions is necessary to explain cross-border investment. However, more work is needed to identify the exact mechanism by which the finance-FDI effect occurs. Our results are consistent with several candidate rationalizations for the effect, including a discount-factor/mispricing effect, a wealth effect (Baker et al., 2009 and Froot and Stein, 1991), and a proactive-financial-strategy effect (Oxelheim et al., 2001). The question by what mechanism the finance-FDI effect occurs is also linked to the mode of investment. It remains to be researched whether the equity-acquisition effect revealed in this paper can be generalized to non-acquisition FDI.