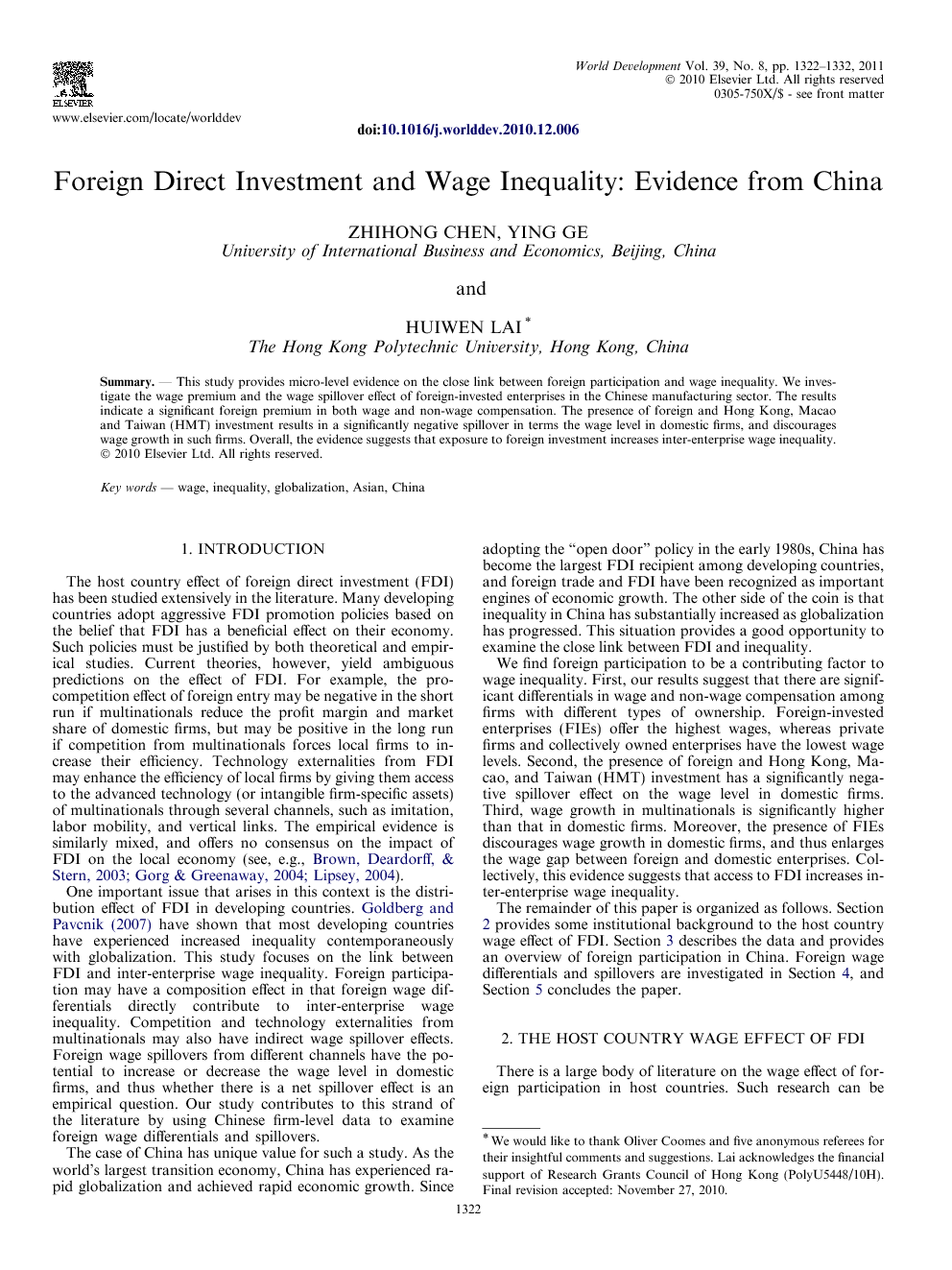 This study provides micro-level evidence on the close link between foreign participation and wage inequality. We investigate the wage premium and the wage spillover effect of foreign-invested enterprises in the Chinese manufacturing sector. The results indicate a significant foreign premium in both wage and non-wage compensation. The presence of foreign and Hong Kong, Macao and Taiwan (HMT) investment results in a significantly negative spillover in terms the wage level in domestic firms, and discourages wage growth in such firms. Overall, the evidence suggests that exposure to foreign investment increases inter-enterprise wage inequality.

The host country effect of foreign direct investment (FDI) has been studied extensively in the literature. Many developing countries adopt aggressive FDI promotion policies based on the belief that FDI has a beneficial effect on their economy. Such policies must be justified by both theoretical and empirical studies. Current theories, however, yield ambiguous predictions on the effect of FDI. For example, the pro-competition effect of foreign entry may be negative in the short run if multinationals reduce the profit margin and market share of domestic firms, but may be positive in the long run if competition from multinationals forces local firms to increase their efficiency. Technology externalities from FDI may enhance the efficiency of local firms by giving them access to the advanced technology (or intangible firm-specific assets) of multinationals through several channels, such as imitation, labor mobility, and vertical links. The empirical evidence is similarly mixed, and offers no consensus on the impact of FDI on the local economy (see, e.g., Brown et al., 2003, Gorg and Greenaway, 2004 and Lipsey, 2004). One important issue that arises in this context is the distribution effect of FDI in developing countries. Goldberg and Pavcnik (2007) have shown that most developing countries have experienced increased inequality contemporaneously with globalization. This study focuses on the link between FDI and inter-enterprise wage inequality. Foreign participation may have a composition effect in that foreign wage differentials directly contribute to inter-enterprise wage inequality. Competition and technology externalities from multinationals may also have indirect wage spillover effects. Foreign wage spillovers from different channels have the potential to increase or decrease the wage level in domestic firms, and thus whether there is a net spillover effect is an empirical question. Our study contributes to this strand of the literature by using Chinese firm-level data to examine foreign wage differentials and spillovers. The case of China has unique value for such a study. As the world’s largest transition economy, China has experienced rapid globalization and achieved rapid economic growth. Since adopting the “open door” policy in the early 1980s, China has become the largest FDI recipient among developing countries, and foreign trade and FDI have been recognized as important engines of economic growth. The other side of the coin is that inequality in China has substantially increased as globalization has progressed. This situation provides a good opportunity to examine the close link between FDI and inequality. We find foreign participation to be a contributing factor to wage inequality. First, our results suggest that there are significant differentials in wage and non-wage compensation among firms with different types of ownership. Foreign-invested enterprises (FIEs) offer the highest wages, whereas private firms and collectively owned enterprises have the lowest wage levels. Second, the presence of foreign and Hong Kong, Macao, and Taiwan (HMT) investment has a significantly negative spillover effect on the wage level in domestic firms. Third, wage growth in multinationals is significantly higher than that in domestic firms. Moreover, the presence of FIEs discourages wage growth in domestic firms, and thus enlarges the wage gap between foreign and domestic enterprises. Collectively, this evidence suggests that access to FDI increases inter-enterprise wage inequality. The remainder of this paper is organized as follows. Section 2 provides some institutional background to the host country wage effect of FDI. Section 3 describes the data and provides an overview of foreign participation in China. Foreign wage differentials and spillovers are investigated in Section 4, and Section 5 concludes the paper.

Most developing countries have experienced a sharp increase in inequality over the course of the globalization process. This study presents evidence that exposure to FDI is closely associated with inter-enterprise wage inequality. Using Chinese micro-level data, we investigate foreign wage differentials and foreign spillovers to domestic firms. Consistent with previous studies, we find a significant foreign premium in both wage and non-wage compensation. The presence of foreign and HMT investment has significantly negative spillover effects on the wage level in domestic firms. These negative effects are more significant for HMT investment than for foreign investment, indicating that the technology externalities of HMTIEs are weaker than those of FIEs. The insignificance of the within-industry spillovers from foreign investment suggests that within-industry technology spillovers may be sufficiently strong to offset the negative spillovers created through pecuniary channels. Our analysis also shows that the wage growth rates in FIEs and HMTIEs are higher than the wage growth rate in domestic firms, and that foreign and HMT investment discourages wage growth in domestic firms. FDI promotion policies are important development strategies for developing countries undergoing industrialization. For example, FDI has been long recognized as an important engine of China’s rapid growth. Whalley and Xin (2006) find that foreign firms (including HMTIEs) contributed more than 40% of China’s economic growth in 2003 and 2004. However, the distribution effect has become an increasingly important consideration in evaluating these policies. Our findings of significant foreign wage differentials and negative foreign wage spillovers suggest that FDI may have a detrimental effect on domestic firms when the negative competition effect dominates the positive effect of technology externalities. Foreign participation not only directly contributes to wage inequality through the composition effect, but also enlarges the wage gap through negative spillovers to domestic enterprises. Due to data limitations, our analysis does not include the service sector. The service sector has gradually been liberalized in recent years, and has become increasingly important to the Chinese economy, accounting for 39.1% of GDP and 32.1% of employment in 2006. Foreign participation in the service industry has grown rapidly, especially since China’s accession to the WTO (see, e.g., Branstetter & Lardy, 2006). It would be interesting for future research to examine the impact of foreign entry to the service sector on wage inequality. Another possible extension of our study would be to investigate whether the wage effect of FDI depends on regional, industry, and enterprise characteristics.