عنوان انگلیسی
Does it matter where you come from? Vertical spillovers from foreign direct investment and the origin of investors
دانلود فوری مقاله + سفارش ترجمه 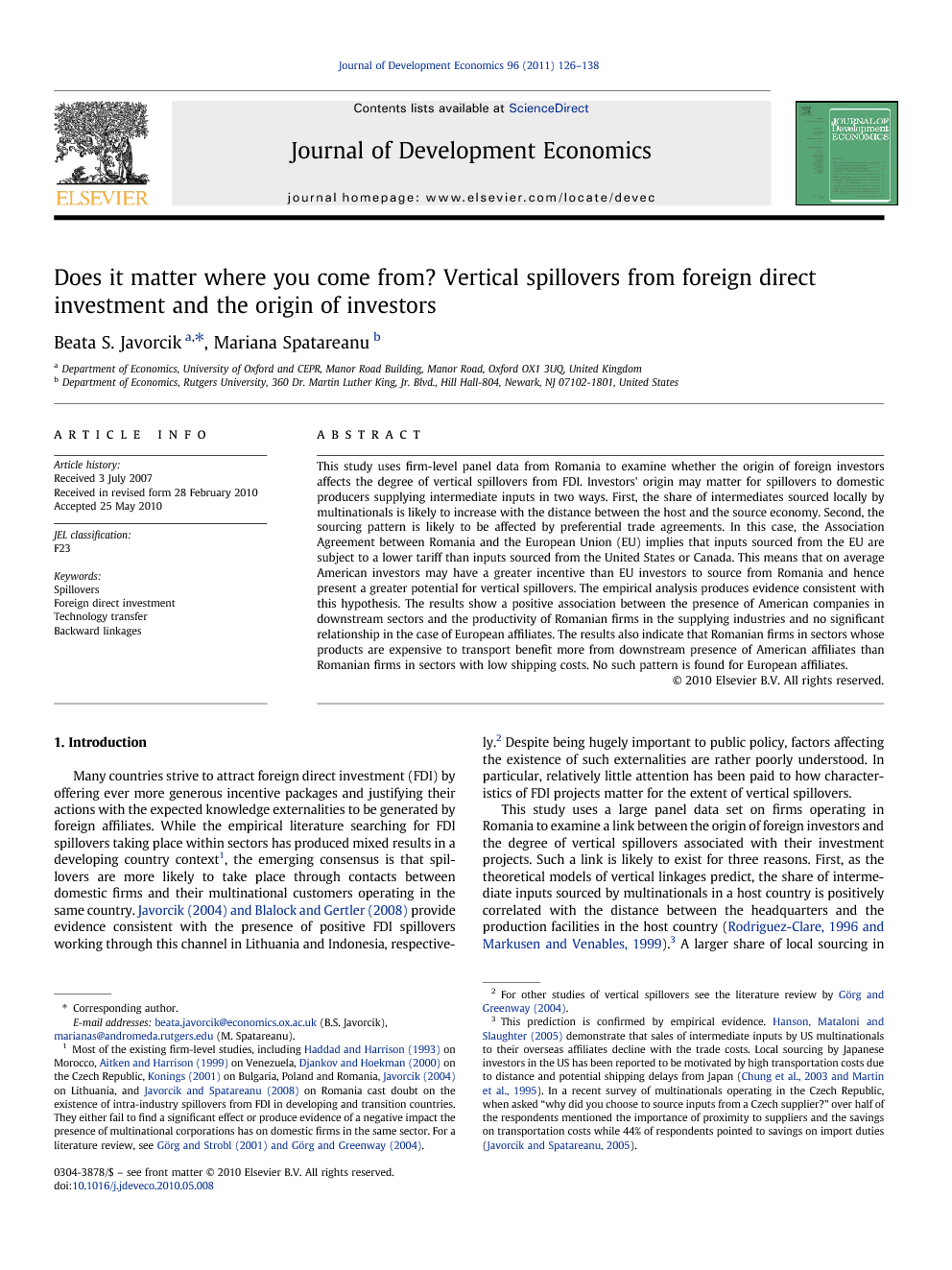 This study uses firm-level panel data from Romania to examine whether the origin of foreign investors affects the degree of vertical spillovers from FDI. Investors' origin may matter for spillovers to domestic producers supplying intermediate inputs in two ways. First, the share of intermediates sourced locally by multinationals is likely to increase with the distance between the host and the source economy. Second, the sourcing pattern is likely to be affected by preferential trade agreements. In this case, the Association Agreement between Romania and the European Union (EU) implies that inputs sourced from the EU are subject to a lower tariff than inputs sourced from the United States or Canada. This means that on average American investors may have a greater incentive than EU investors to source from Romania and hence present a greater potential for vertical spillovers. The empirical analysis produces evidence consistent with this hypothesis. The results show a positive association between the presence of American companies in downstream sectors and the productivity of Romanian firms in the supplying industries and no significant relationship in the case of European affiliates. The results also indicate that Romanian firms in sectors whose products are expensive to transport benefit more from downstream presence of American affiliates than Romanian firms in sectors with low shipping costs. No such pattern is found for European affiliates.

This study uses a firm-level panel data set from Romania to examine whether the origin of foreign investors affects the degree of vertical spillovers from FDI. Foreign investors' country of origin may matter for spillovers to domestic producers in upstream sectors (supplying intermediate inputs) in several ways. First, the share of intermediate inputs sourced by multinationals from a host country is likely to increase with the distance between the host and the source economy. Second, preferential trade agreements of which some but not other investors are members are also likely to affect the sourcing patterns of foreign affiliates. In our case, the Association Agreement signed between Romania and the EU implies that inputs sourced from the European Union are subject to lower tariffs than those purchased from the US or Canada. Further, while for European investors intermediate inputs sourced from home country suppliers comply with the rules of origin and thus products in which they are incorporated can be exported to the EU on preferential terms, this would not be the case for home country suppliers of American multinationals. Therefore, while for European investors the benefits of volume discounts stemming from using parent company's suppliers in the home country are likely to outweigh the import costs, and the opposite is likely to be the case for American investors. For this reason, we expect that American investors have on average a greater incentive to source inputs in Romania than do European multinationals. A larger share of local sourcing implies more contacts between multinationals and Romanian firms in upstream sectors and thus a greater potential for knowledge spillovers. Thus our hypothesis is that (relative to European FDI) American investment is likely to be associated with greater knowledge spillovers to Romanian firms in the supplying industries. Our empirical analysis produces evidence in support of this hypothesis. We find a statistically significant and positive association between the presence of American companies in downstream sectors and the productivity of Romanian firms in the supplying industries. The data also indicate that operations of European investors in downstream sectors are not correlated with the productivity of Romanian firms in the supplying industries. The differences between the effects stemming from investors of different origin are statistically significant. More importantly, we find that the different extent of vertical spillovers associated with American and European FDI is systematically related to sector-specific transport costs. Romanian firms in sectors whose products are expensive to transport benefit more from downstream presence of American FDI than other firms. In the case of European FDI, the magnitude of spillovers to the supplying sectors is not systematically related to the shipping costs. We conclude that the observed pattern is consistent with our hypothesis that FDI inflows from far away source countries are more likely to be associated with positive vertical spillovers. Thus in sum, the origin of foreign investors does seem to matter for FDI spillovers.