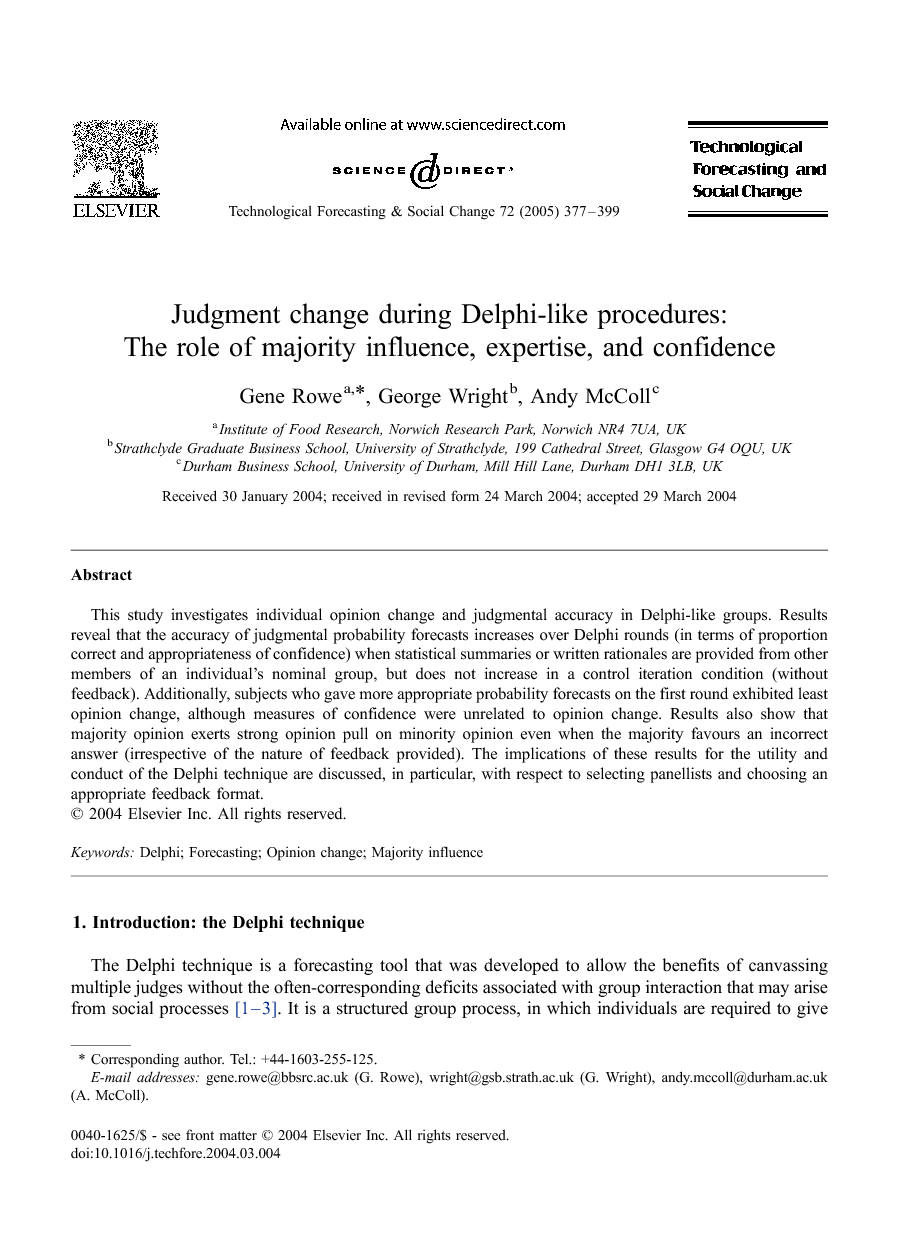 This study investigates individual opinion change and judgmental accuracy in Delphi-like groups. Results reveal that the accuracy of judgmental probability forecasts increases over Delphi rounds (in terms of proportion correct and appropriateness of confidence) when statistical summaries or written rationales are provided from other members of an individual's nominal group, but does not increase in a control iteration condition (without feedback). Additionally, subjects who gave more appropriate probability forecasts on the first round exhibited least opinion change, although measures of confidence were unrelated to opinion change. Results also show that majority opinion exerts strong opinion pull on minority opinion even when the majority favours an incorrect answer (irrespective of the nature of feedback provided). The implications of these results for the utility and conduct of the Delphi technique are discussed, in particular, with respect to selecting panellists and choosing an appropriate feedback format.

The Delphi technique is a forecasting tool that was developed to allow the benefits of canvassing multiple judges without the often-corresponding deficits associated with group interaction that may arise from social processes [1], [2] and [3]. It is a structured group process, in which individuals are required to give numerical judgments or forecasts over a number of rounds, with feedback being provided from the anonymous other members of the panel, and the final aggregate being taken as the process output. It is not, however, a method intended to force consensus per se—response stability rather than consensus is the signal to cease additional polling, with disagreement (as indicated by, for example, a bipolar distribution of responses) accepted as informative. Delphi's effectiveness over comparative procedures, at least in terms of judgmental accuracy, has generally been demonstrated [3]. In a review of empirical studies of Delphi, Rowe and Wright [4] found that Delphi groups outperformed ‘statistical’ groups (which involve the aggregation of the judgments of noninteracting individuals) in 12 studies, underperformed these in two, and ‘tied’ in two others, while Delphi outperformed standard interacting groups in five studies, underperformed in one, and ‘tied’ in two. This trend is all the more impressive given that many laboratory studies of Delphi effectiveness have used simplified versions of the technique (e.g., with limited feedback) in simplified contexts (e.g., using nonexpert, student subjects) that might be anticipated to undermine the virtues of the technique [4] and [5]. We return to this issue shortly. Although research suggests that Delphi allows improved judgment compared to alternative methods, as demonstrated in these ‘technique comparison’ studies, the reasons for this are still unclear, given a relative dearth of ‘process’ studies that have attempted to establish the precise mechanism for improvement in Delphi [5]. In this study, we attempt to advance understanding of how Delphi improves judgmental performance.