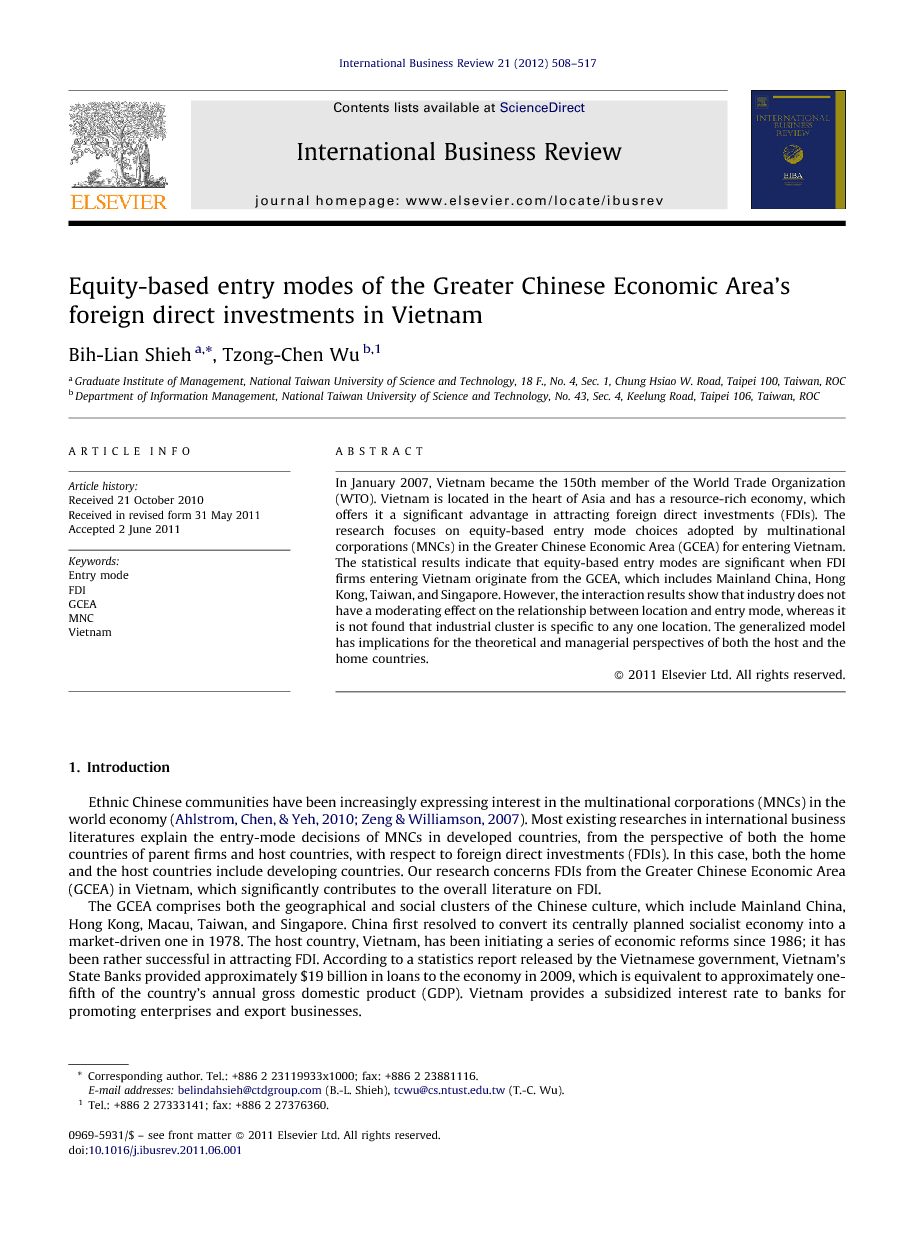 In January 2007, Vietnam became the 150th member of the World Trade Organization (WTO). Vietnam is located in the heart of Asia and has a resource-rich economy, which offers it a significant advantage in attracting foreign direct investments (FDIs). The research focuses on equity-based entry mode choices adopted by multinational corporations (MNCs) in the Greater Chinese Economic Area (GCEA) for entering Vietnam. The statistical results indicate that equity-based entry modes are significant when FDI firms entering Vietnam originate from the GCEA, which includes Mainland China, Hong Kong, Taiwan, and Singapore. However, the interaction results show that industry does not have a moderating effect on the relationship between location and entry mode, whereas it is not found that industrial cluster is specific to any one location. The generalized model has implications for the theoretical and managerial perspectives of both the host and the home countries.

Ethnic Chinese communities have been increasingly expressing interest in the multinational corporations (MNCs) in the world economy (Ahlstrom et al., 2010 and Zeng and Williamson, 2007). Most existing researches in international business literatures explain the entry-mode decisions of MNCs in developed countries, from the perspective of both the home countries of parent firms and host countries, with respect to foreign direct investments (FDIs). In this case, both the home and the host countries include developing countries. Our research concerns FDIs from the Greater Chinese Economic Area (GCEA) in Vietnam, which significantly contributes to the overall literature on FDI. The GCEA comprises both the geographical and social clusters of the Chinese culture, which include Mainland China, Hong Kong, Macau, Taiwan, and Singapore. China first resolved to convert its centrally planned socialist economy into a market-driven one in 1978. The host country, Vietnam, has been initiating a series of economic reforms since 1986; it has been rather successful in attracting FDI. According to a statistics report released by the Vietnamese government, Vietnam's State Banks provided approximately $19 billion in loans to the economy in 2009, which is equivalent to approximately one-fifth of the country's annual gross domestic product (GDP). Vietnam provides a subsidized interest rate to banks for promoting enterprises and export businesses. We could not find any publications that developed a formal theory for investigating MNCs from emerging economies (Demirbag, Tatoglu, & Glaister, 2009); further, MNCs in emerging countries have not been studied yet in the context concerning MNCs from developing countries. The objective of this study is to explore the manner in which MNCs from the GCEA enter emerging countries like Vietnam, which probably follows China's footsteps in the developing world, and determining the equity-based entry modes of FDIs. Vietnam provides a good case to test a number of variables on the determinants of equity-based entry mode strategies of emerging country MNCs. Particularly, the objective of this research is to test the relationships between the entry mode and its determinations of the GCEA's FDIs in Vietnam, thereby contributing to the scope of international business study in Asia. This paper reviews the extant literature on entry modes, develops a theoretical argument for ascertaining the influence of equity-based entry mode strategies using important determinants, and presents the findings obtained from a unique data source, i.e., MNCs from the GCEA in Vietnam. By making the case of FDI in an emerging country, the framework attempts to identify a formal theory of MNCs from emerging countries.

One explanation for the difficulties in determinants of FDI at the subsidiary level in an emerging country is the lack of relevant data since data regarding subsidiaries are rather difficult to collect. As with previous researches, this study does not comprise any major limitations. This study contributes to the overall understanding of emerging markets and particularly to entry-mode choice of MNCs from such emerging countries. Theoretically, our model establishes the essential factors that affect FDI equity-based entry mode in emerging countries. The equity-based entry mode model can be used as a reference not only in Vietnam but also in other sides of both the host and home emerging countries. We do find that country risk, cultural distance, foreign exchange rate, competitive intensity, investment amounts, and duration have statistically significant effects on entry strategy. Empirically, our findings develop a generalized model for the decision-making process in the proper way. Generally speaking, making the case that MNCs from emerging countries are different because of the determinants of FDI as below. First, foreign exchange rates significantly influence the entry-mode choice. Essentially, models A and B clearly indicate that foreign exchange rates significantly influence the entry-mode choice of firms from the GCEA in Vietnam. When the VND is weakened, firms are more likely to select WOSs instead of EJVs as an entry mode. This indicates that the equity-based entry modes adopted by MNCs in GCEA are major determinants of FDI in Vietnam. Second, our data suggest that advertising intensity does not significantly influence the entry mode of FDIs. Although Tsang had used the 1993 edition of the Almanac of Business and Industrial Ratios for calculating advertising intensity, this study considered the period from 1992 to 2009 and used the 2009 edition of the same book; however, comparing to previous empirical evidence, the findings in this attempt to clarify the positive sign. Third, competitive intensity significantly influences the entry-mode choice. As compared to other foreign firms, the results of the industry-specific variables including advertising intensity and competitive intensity are rather different for the firms from the GCEA that invest in Vietnam. These results may be easily ascertained from the variance analysis indicated in Table 2. It is evident that the firms from GCEA are more likely to select WOSs when the competitive intensity in Vietnam is higher. Finally, no support was found for the impact of location on the entry-mode choices. In practice, our results lend some credence to the hypotheses that the GCEA firms are more likely to choose WOSs rather than EJVs whenever the investments involve higher country risk, the host currency depreciates, or the investments are for long durations. Moreover, the findings also suggest that the GCEA firms are more likely to choose EJVs rather than WOSs in case of large investments and if investments are made in HCMC. We have limited this research to only two modes of entry – this may be a limitation to the empirical test; on the other hand, this is an essential contribution to the theoretical discussion of the overall literature on FDI. Moreover, although China's economy has experienced rapid growth in recent decades, significant differences between the economy of Mainland China and the economies of Hong Kong, Macau, Singapore, and Taiwan may still exist. The observed relationships between country-specific factors, industry-specific factors, venture-specific factors, and equity-based entry modes are unique to subsidiaries owned by MNCs in the GCEA; therefore, these results help us further assess the impact of equity-based entry mode on performance as well as the effect of the determinants of entry mode on performance. The manner in which entry-mode choice influences FDI performance in Vietnam as well as other developing countries must be studied further.