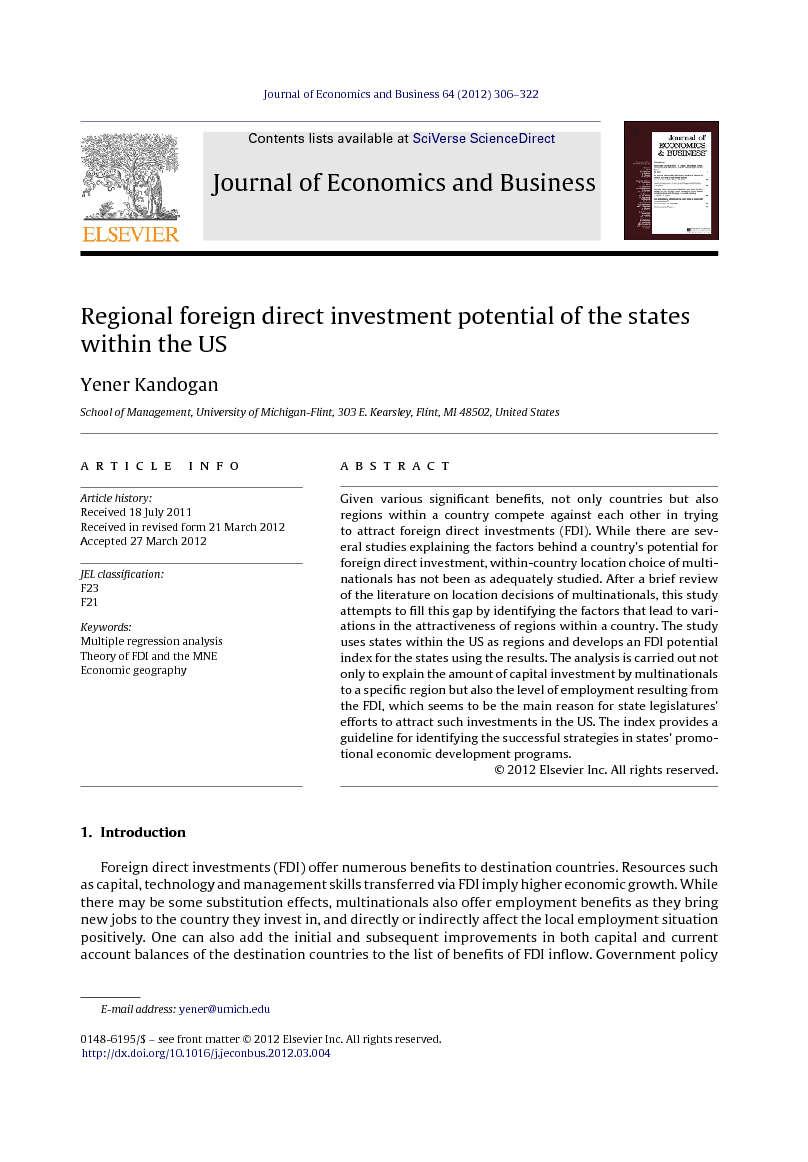 Given various significant benefits, not only countries but also regions within a country compete against each other in trying to attract foreign direct investments (FDI). While there are several studies explaining the factors behind a country's potential for foreign direct investment, within-country location choice of multinationals has not been as adequately studied. After a brief review of the literature on location decisions of multinationals, this study attempts to fill this gap by identifying the factors that lead to variations in the attractiveness of regions within a country. The study uses states within the US as regions and develops an FDI potential index for the states using the results. The analysis is carried out not only to explain the amount of capital investment by multinationals to a specific region but also the level of employment resulting from the FDI, which seems to be the main reason for state legislatures’ efforts to attract such investments in the US. The index provides a guideline for identifying the successful strategies in states’ promotional economic development programs.

Foreign direct investments (FDI) offer numerous benefits to destination countries. Resources such as capital, technology and management skills transferred via FDI imply higher economic growth. While there may be some substitution effects, multinationals also offer employment benefits as they bring new jobs to the country they invest in, and directly or indirectly affect the local employment situation positively. One can also add the initial and subsequent improvements in both capital and current account balances of the destination countries to the list of benefits of FDI inflow. Government policy makers recognize that these inflows can lead to high-value employment and crucial know-how inflow (Mudambi & Mudambi, 2005). Governments in developed countries tend to focus on the objective of generating new employment as evidenced by the widely used practice of assessing the effectiveness of incentives in terms of expenditures per job created (McCann & Mudambi, 2004). FDI inflows potentially play an important role in the economic development (Borensztein et al., 1998 and Markusen and Venables, 1999) of regions within a country as well. Fallon and Cook (2010) concludes that governmental policy makers at the regional level can also have an important role in drawing targeted FDI inflow to their regions. Going beyond such regional policies, existing research suggests that regional, national and international factors, including policies, all work together to attract FDI inflow to a particular region in advanced industrial countries (Dunning, 2002, Hill and Munday, 1992, Hill and Munday, 1995, Loewendahl, 2001, Phelps et al., 1998 and Stopford and Strange, 1991). Hence, there is a fierce competition among regions for FDI, which constitutes an important challenge for the local government policymakers (Phelps & Raines, 2003). Such interregional competition is increasingly common, especially in countries lacking strong government regulation at national level (Oman, 2000 and Phelps, 2000). This is likely the case in the US – a federal country with substantial regional autonomy on economic matters. Indeed, for the states within the US, the promotion of FDI inflow has become a high priority component of their economic development policy primarily motivated by the new jobs FDI brings to the states. In competing to attract the FDI to their regions, state governments adopt different strategies. These strategies include various incentives to foreign multinationals, including tax concessions, low interest loans, grants and subsidies, and funding for improving the infrastructure, among other approaches. The literature is uncertain whether state promotional programs are successful. Previous studies such as Coughlin, Terza, and Arromdee (1991), Friedman, Gerlowksi, and Silberman (1992), Head, Ries, and Swenson (1999) found positive associations between the location of FDI and promotion expenditures. In contrast, Wilson (1989) found that business incentives were not the primary factor for location decisions and did not have a significant effect on the state's employment growth. Luger and Shetty's (1985) study also revealed no clear correlation; they argued that state promotional incentives were just one of the criteria and were not viewed by many multinationals as a major source of motivation. This inconclusiveness is potentially a result the complexity of the state promotional programs. Various combinations of different incentives of varying intensity have been offered by the regions to the multinationals. Hence, it is rather difficult to gauge all of these in one unit of measurement. The contribution of this paper to the literature is multi-faceted. First, using the findings of numerous well-known studies in the literature that explore the attractiveness of countries for FDI inflow, we explore the factors that affect the within-country location decisions of foreign multinationals. Clearly, this knowledge of the factors influencing the location choices is important to state, local as well as federal officials who wish to capitalize on this important source of economic development. Then, we build an index of FDI potential using the results of the analysis. Since the US is a developed country and the local authorities care about the employment effects more so than the resource transfer benefits, the index developed here is based on factors affecting the employment generated by FDI. In other words, unlike other studies, the analysis in this paper also covers the employment at foreign multinationals as well as the FDI stock since the former seems to be the primary purpose of states seeking and often time engaging in promotional activities to bring FDI. This index reflects how much FDI each state should potentially attract under normal circumstances leaving the effects of state promotional programs out, providing a benchmark. A comparison of states’ actual FDI performance to their potential helps in identifying the states that outperform primarily resulting from the successful strategies in their promotional programs after controlling for other explanations for the difference from the literature. Future research analyzing the commonalities of these states’ programs is expected to shed conclusive light into the combination of which incentives at what intensity are successful in attracting FDI-generated employment to regions.

Using the literature's finding on FDI locations, this study identified factors that are important in within-country regional locational decisions of multinationals. Results are used to develop an index of a state's potential to generate employment by multinationals. Findings here are broadly consistent with those of previous studies. FDI location at regional level would appear to be driven by a range of strategic determinants, including the search for market, efficiency, and to a lesser extent, strategic assets. The most important factor is the agglomeration economies. FDI potential index using the results of the analysis yielded interesting sets of states that over- or underperformed relative to their potential. Other than the geographic location such as peripheral states, economic enclaves, and the technology-intensity of the FDI they attract, for which the states do not have much control, this article suggests that promotional expenditures by states can partially offset the disadvantages resulting from a lack of agglomeration. After controlling for these factors from the literature for the difference between the potential and actual employment, states with successful promotional economic development programs are identified. Identification of these states should be considered as an important step towards identifying effective specific incentives in these programs. Further research on the particular incentives used in these states should shed some light in this regard. Given the results of this study on the trade-off between employment and technology intensity of FDI, future research should also look into what kind of FDI each state should focus? Short-term employment generating FDI or know-how intensive FDI? Which incentives are useful for each type of FDI? Although the current emphasis seems to be on the former, securing know-how intensive FDI may become an increasingly important policy goal, since that is closely linked to economic growth, and eventually higher employment may be generated by creating globally competitive clusters. Some studies have already been done in this area. Investment incentives geared towards the latter can potentially create a virtuous circle of further investment, associated with regional agglomeration effects (Cantwell and Mudambi, 2000 and Cantwell and Mudambi, 2005). These incentives include tax abatement and firm-specific infrastructure supports that are generally associated with greater knowledge flows (Mudambi & Mudambi, 2005). In contrast, training grants and incentives for backward areas were associated with greater employment generation. Incentives that create employment generation seem to have a negative effect on knowledge generation. The result on the significance of agglomeration economies as a determinant for regional location of FDI suggests that future research should also look into different types of agglomeration economies. A study on this subject by Hilber and Voicu (2010) explores what types are most important. Industry-specific domestic agglomeration? Or foreign agglomeration? Finally, some shortcomings of this study must be noted. Other than lack of a time series analysis due to an absence of historical data, regions used in this study, the US states, consist of very large regions, which stretch the Marshall's (1898) concept of agglomeration. Very large regions may also be inadequate in accounting for labor market conditions. Additionally, relationships between determinants of FDI and greenfield investment might be different than those between determinants and acquisition investment (Blonigen & Tomlin, 2001).