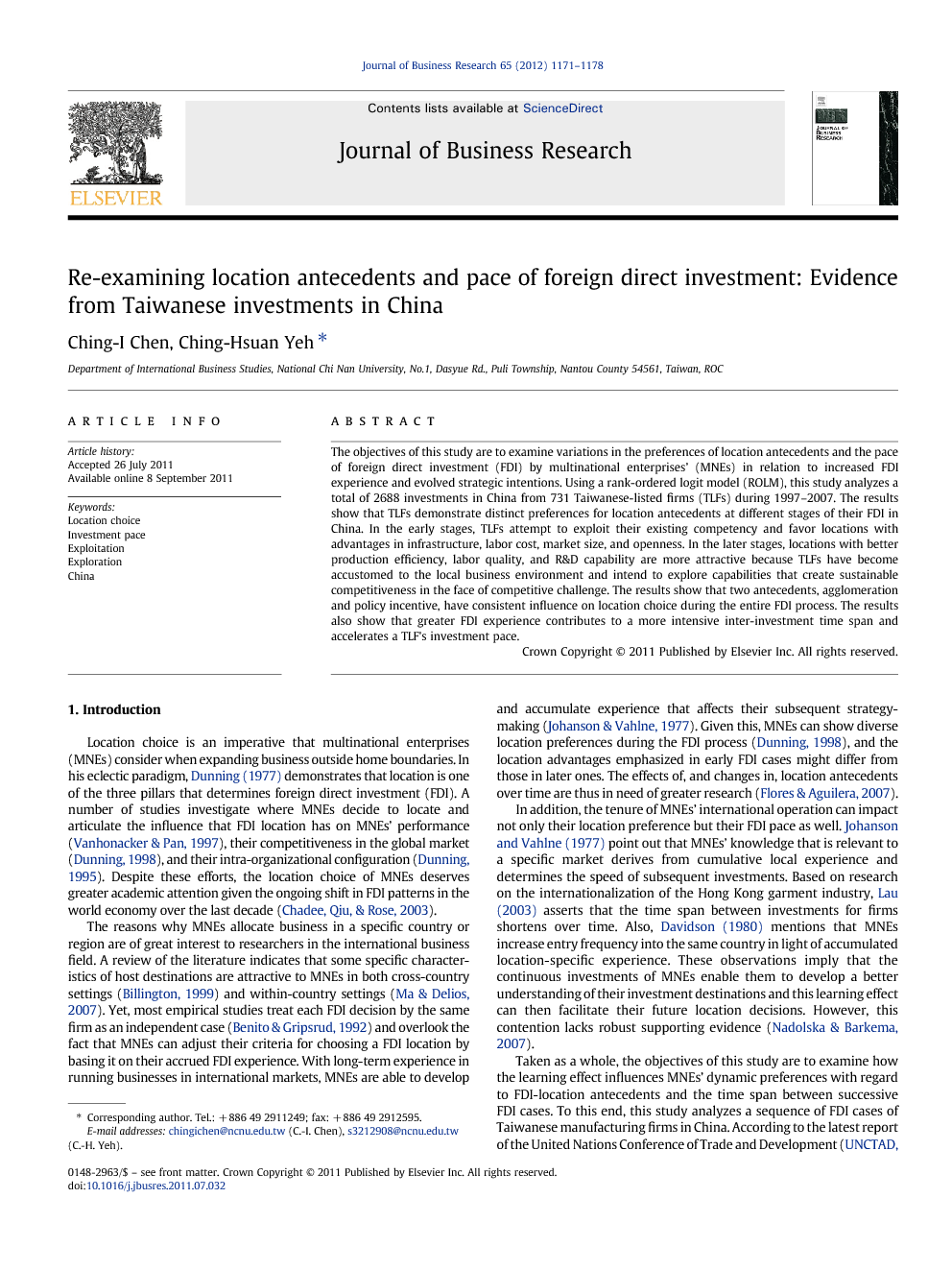 The objectives of this study are to examine variations in the preferences of location antecedents and the pace of foreign direct investment (FDI) by multinational enterprises’ (MNEs) in relation to increased FDI experience and evolved strategic intentions. Using a rank-ordered logit model (ROLM), this study analyzes a total of 2688 investments in China from 731 Taiwanese-listed firms (TLFs) during 1997–2007. The results show that TLFs demonstrate distinct preferences for location antecedents at different stages of their FDI in China. In the early stages, TLFs attempt to exploit their existing competency and favor locations with advantages in infrastructure, labor cost, market size, and openness. In the later stages, locations with better production efficiency, labor quality, and R&D capability are more attractive because TLFs have become accustomed to the local business environment and intend to explore capabilities that create sustainable competitiveness in the face of competitive challenge. The results show that two antecedents, agglomeration and policy incentive, have consistent influence on location choice during the entire FDI process. The results also show that greater FDI experience contributes to a more intensive inter-investment time span and accelerates a TLF's investment pace.

Location choice is an imperative that multinational enterprises (MNEs) consider when expanding business outside home boundaries. In his eclectic paradigm, Dunning (1977) demonstrates that location is one of the three pillars that determines foreign direct investment (FDI). A number of studies investigate where MNEs decide to locate and articulate the influence that FDI location has on MNEs’ performance (Vanhonacker & Pan, 1997), their competitiveness in the global market (Dunning, 1998), and their intra-organizational configuration (Dunning, 1995). Despite these efforts, the location choice of MNEs deserves greater academic attention given the ongoing shift in FDI patterns in the world economy over the last decade (Chadee, Qiu, & Rose, 2003). The reasons why MNEs allocate business in a specific country or region are of great interest to researchers in the international business field. A review of the literature indicates that some specific characteristics of host destinations are attractive to MNEs in both cross-country settings (Billington, 1999) and within-country settings (Ma & Delios, 2007). Yet, most empirical studies treat each FDI decision by the same firm as an independent case (Benito & Gripsrud, 1992) and overlook the fact that MNEs can adjust their criteria for choosing a FDI location by basing it on their accrued FDI experience. With long-term experience in running businesses in international markets, MNEs are able to develop and accumulate experience that affects their subsequent strategy-making (Johanson & Vahlne, 1977). Given this, MNEs can show diverse location preferences during the FDI process (Dunning, 1998), and the location advantages emphasized in early FDI cases might differ from those in later ones. The effects of, and changes in, location antecedents over time are thus in need of greater research (Flores & Aguilera, 2007). In addition, the tenure of MNEs’ international operation can impact not only their location preference but their FDI pace as well. Johanson and Vahlne (1977) point out that MNEs’ knowledge that is relevant to a specific market derives from cumulative local experience and determines the speed of subsequent investments. Based on research on the internationalization of the Hong Kong garment industry, Lau (2003) asserts that the time span between investments for firms shortens over time. Also, Davidson (1980) mentions that MNEs increase entry frequency into the same country in light of accumulated location-specific experience. These observations imply that the continuous investments of MNEs enable them to develop a better understanding of their investment destinations and this learning effect can then facilitate their future location decisions. However, this contention lacks robust supporting evidence (Nadolska & Barkema, 2007). Taken as a whole, the objectives of this study are to examine how the learning effect influences MNEs’ dynamic preferences with regard to FDI-location antecedents and the time span between successive FDI cases. To this end, this study analyzes a sequence of FDI cases of Taiwanese manufacturing firms in China. According to the latest report of the United Nations Conference of Trade and Development (UNCTAD, 2010), China has become the second largest recipient of FDI after the U.S. and received investments valued at US$95 billion in 2009. Of the numerous countries investing in China, Taiwan, which officially opened investment in China in 1991, accounts for a large portion of FDI in China in spite of the political hostility between these two parties (China Statistical Yearbook, 1997–2007 editions). Notably, this paper delves into the FDI patterns of TLFs in China at the provincial level and explicitly focuses on the economic incentives, like market size and labor cost, each province offers (Buckley et al., 2007 and Coviello and McAuley, 1999). Though China is a unitary nation with a uniform legal system, the institutions that contribute to a well-operating market economy (e.g., property rights protection and contract enforcement) can vary across provinces and influence a MNE's location choice (Du, Lu, & Tao, 2008). Given that Taiwan and China share the same language and similar cultures, very little cultural distance exists between them (Zhang, 2005). These close cultural ties enable TLFs to quickly adapt to the distinct local business environment by connecting to the local authorities and to minimize the influence of institutional variation. Hence, this study excludes location antecedents such as culture, language, and regulations (O'Grady and Lane, 1996, Schroath et al., 1993 and Sun et al., 2002). The structure of this paper is as follows. Section two begins with a review of literature on FDI location choice and associates the MNEs’ FDI motives with their preferred location advantages. The remainder of this section introduces nine major location antecedents that MNEs consider for FDI decisions in China. Section three delineates the potential effect of learning on the motive-preference relationship and on the FDI expansion pace. The ROLM and measurements of the focal variables adopted are in section four. The final two sections present the empirical results and discussion.