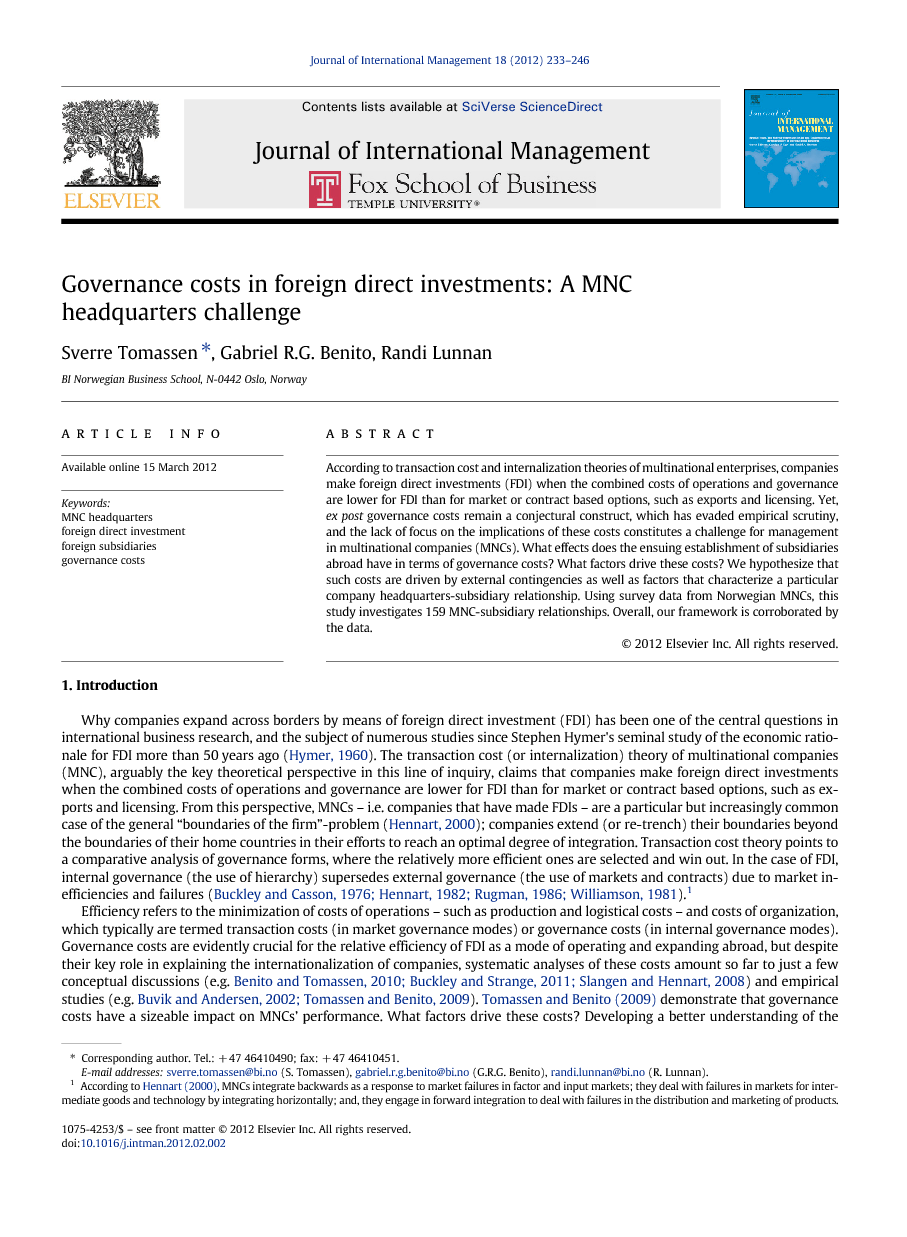 According to transaction cost and internalization theories of multinational enterprises, companies make foreign direct investments (FDI) when the combined costs of operations and governance are lower for FDI than for market or contract based options, such as exports and licensing. Yet, ex post governance costs remain a conjectural construct, which has evaded empirical scrutiny, and the lack of focus on the implications of these costs constitutes a challenge for management in multinational companies (MNCs). What effects does the ensuing establishment of subsidiaries abroad have in terms of governance costs? What factors drive these costs? We hypothesize that such costs are driven by external contingencies as well as factors that characterize a particular company headquarters-subsidiary relationship. Using survey data from Norwegian MNCs, this study investigates 159 MNC-subsidiary relationships. Overall, our framework is corroborated by the data.

Why companies expand across borders by means of foreign direct investment (FDI) has been one of the central questions in international business research, and the subject of numerous studies since Stephen Hymer's seminal study of the economic rationale for FDI more than 50 years ago (Hymer, 1960). The transaction cost (or internalization) theory of multinational companies (MNC), arguably the key theoretical perspective in this line of inquiry, claims that companies make foreign direct investments when the combined costs of operations and governance are lower for FDI than for market or contract based options, such as exports and licensing. From this perspective, MNCs – i.e. companies that have made FDIs – are a particular but increasingly common case of the general “boundaries of the firm”-problem (Hennart, 2000); companies extend (or re-trench) their boundaries beyond the boundaries of their home countries in their efforts to reach an optimal degree of integration. Transaction cost theory points to a comparative analysis of governance forms, where the relatively more efficient ones are selected and win out. In the case of FDI, internal governance (the use of hierarchy) supersedes external governance (the use of markets and contracts) due to market inefficiencies and failures (Buckley and Casson, 1976, Hennart, 1982, Rugman, 1986 and Williamson, 1981).1 Efficiency refers to the minimization of costs of operations – such as production and logistical costs – and costs of organization, which typically are termed transaction costs (in market governance modes) or governance costs (in internal governance modes). Governance costs are evidently crucial for the relative efficiency of FDI as a mode of operating and expanding abroad, but despite their key role in explaining the internationalization of companies, systematic analyses of these costs amount so far to just a few conceptual discussions (e.g. Benito and Tomassen, 2010, Buckley and Strange, 2011 and Slangen and Hennart, 2008) and empirical studies (e.g. Buvik and Andersen, 2002 and Tomassen and Benito, 2009). Tomassen and Benito (2009) demonstrate that governance costs have a sizeable impact on MNCs’ performance. What factors drive these costs? Developing a better understanding of the nature and drivers of such costs would seem important for MNC headquarters in their strive to manage foreign operations in the best possible manner. Specifically, we point to three major reasons for why it is essential to examine governance costs in the context of the relationship between MNC headquarters and foreign subsidiaries. First, MNCs make governance decisions, i.e. decisions about how to operate abroad – such as the choice of FDI over, say, a licensing contract – when they select countries to conduct a business activity, which could be production, R&D, procurement, sales and marketing etc. or a combination thereof. Such decisions are usually long-term, inter alia due to various costs of switching between foreign operation modes (Benito et al., 1999). As such decisions are made under imperfect information and with fallible foresight the choices made obviously do not guarantee flawless performance thereafter. Various external and internal factors could change, with consequent effects on governance costs. Second, even if the choice of FDI is supposedly based on a comparative efficiency assessment across various possible modes of operation, the level of governance costs could still be improved for the chosen (and presumably most efficient) mode by gaining further knowledge about such costs. In other words, reducing governance costs within a chosen mode might be possible by choosing cost-reducing courses of action and by avoiding circumstances and/or behaviors that are likely to escalate certain costs. Third, from the viewpoint of transaction cost theory the choice of governance form is principally a question of dealing ex ante with ownership rights pertaining to firms and their assets (Williamson, 1985); internal governance implies that owners of the firm hire labor over which they have the authority to instruct and command, but which they cannot own (in contrast to non-human assets residing within a firm), whereas in market or contract governance consensual exchanges of distinct transaction objects (goods and/or services) take place between independent parties based on expectations of private benefit. However, as pointed out by property rights theorists (see for example Hart, 1989 and Hart, 2011) ex post property rights of many important, even crucial assets often reside with employees and outside parties – for example, unique knowledge and relationships – which in reality leaves the ex ante choice of governance form (e.g. FDI in the form of a wholly-owned subsidiary) as a rather incomplete structural solution to various kinds of encountered, anticipated, or potential market and contract inefficiencies. FDI is simply no panacea. The decisions MNC managers make about where and when to establish subsidiaries in foreign countries have been studied in great detail from economic as well as behavioral perspectives (Aharoni et al., 2011). Fewer studies have gone beyond the initial, presumably more “strategic” entry decision. This is puzzling inasmuch as the period after entry is perhaps even more challenging in terms of managing the relationship between headquarters and subsidiaries, and among subsidiaries, and making local operations work. Here, we take a step in that direction by focusing on what factors drive ex post governance costs and result in variation in their levels. Our study probes into how and to what extent variation in such costs in general can be explained by the context in which the MNC-subsidiary relation is embedded, i.e. country (macro) factors, firm factors, as well relation-specific (micro) factors. Using data from a survey of 159 Norwegian multinational companies, the study indicates that governance costs are present when the MNC evaluates its headquarters-subsidiary relationship. Identifying these costs and their drivers are necessary first steps for MNC headquarters to design and implement actions to lower governance costs.

With few exceptions, research within international management has been limitedly concerned with the costs of governance in foreign ownership modes. This study has tried to shrink this knowledge gap by exploring the antecedents of governance costs, and measuring them. The study has identified several important antecedents such as opportunism, bargaining power, volatility and behavioral uncertainty. It has also shed light on the need to distinguish between internalized headquarters-subsidiary relations based on strong ownership versus strong local property rights. Although a MNC may formally own a subsidiary, the subsidiary could be in command of local specific knowledge etc. In the latter case governance costs are likely to be driven by the “softer” bonding investments, whereas the “harder” classical monitoring, bargaining and information mechanisms are preferred when ownership control is stronger. This insight should be valuable for MNCs in their attempts at building successful and profitable multi-location organizations. This study relies on single key informants. Although much effort has been made to find really knowledgeable persons at MNC headquarters, this is still a limitation of the study. Relying on just one person, opens up for biases in the measurement of the constructs. We recommend that future studies use multiple informant procedures, preferably from both sides of the dyad (since governance costs occur on both sides) and from different sources in each set of units. Further, a cross-sectional design is neither able to detect the direction of influence in the model, nor can lagged effects be revealed; such as an incurred monitoring cost today with negative effects on opportunism tomorrow. Hence, some of the variables might be endogenous. Longitudinal studies are required to really understand the dynamics in the relationship between governance costs and their antecedents. The empirical context for this study is Norwegian-owned multinational companies with majority-owned foreign affiliates, and the study comprises a diverse set of companies, in many different industries, and with activities in a variety of locations. The chosen context was appropriate in terms of variance in the independent variables as well regarding external validity. However, external validity must typically be traded against the isolation requirement, which implies high internal validity. A more homogenous setting would most certainly have increased the possibility of identifying significant relationships since homogeneity in the empirical context decreases the number of other possible explanatory variables. Future studies on governance costs in MNCs should consider alternative research designs to provide a fuller picture of the nature and effects of these costs.