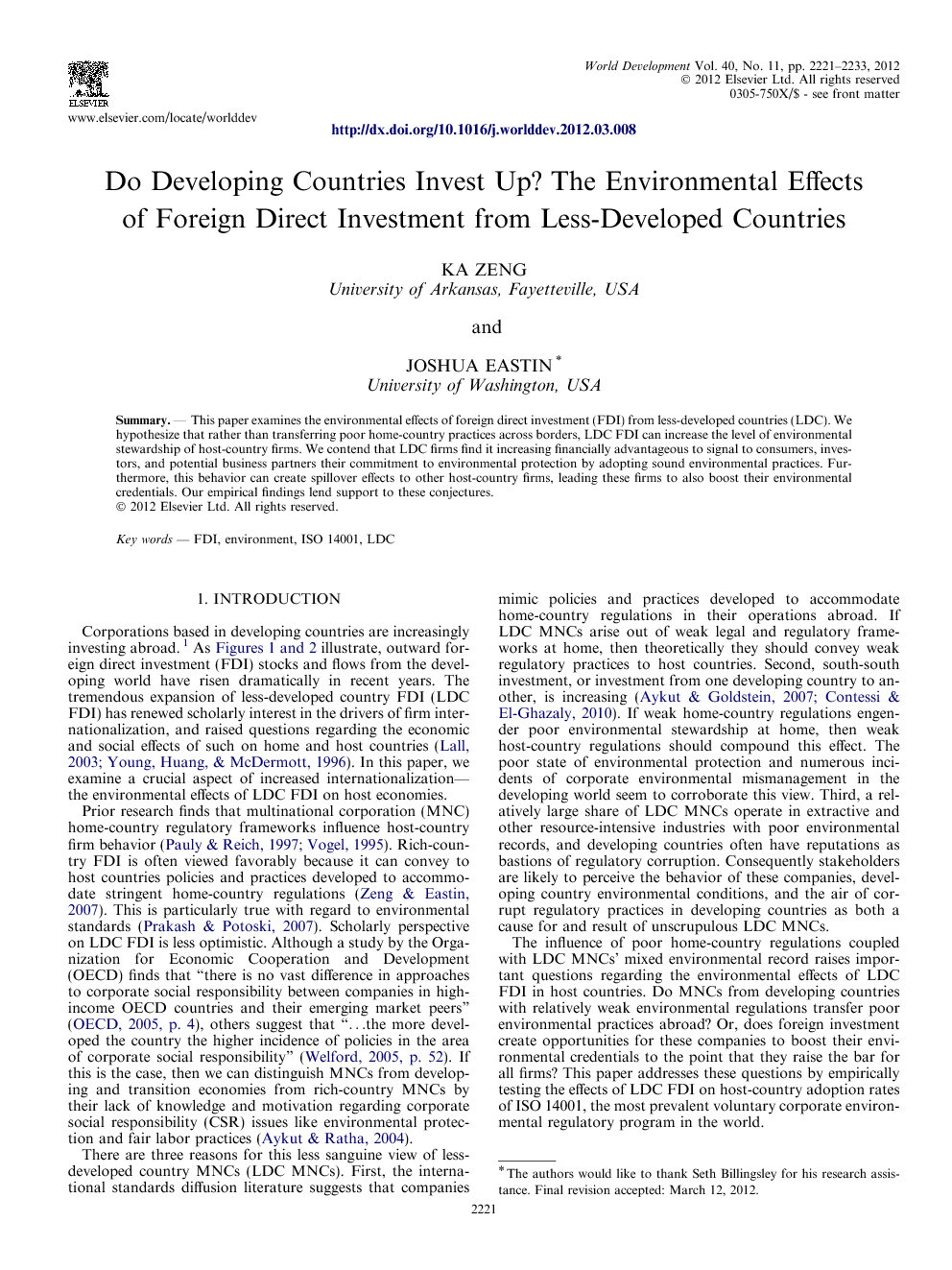 This paper examines the environmental effects of foreign direct investment (FDI) from less-developed countries (LDC). We hypothesize that rather than transferring poor home-country practices across borders, LDC FDI can increase the level of environmental stewardship of host-country firms. We contend that LDC firms find it increasing financially advantageous to signal to consumers, investors, and potential business partners their commitment to environmental protection by adopting sound environmental practices. Furthermore, this behavior can create spillover effects to other host-country firms, leading these firms to also boost their environmental credentials. Our empirical findings lend support to these conjectures.

Corporations based in developing countries are increasingly investing abroad.1 As Figure 1 and Figure 2 illustrate, outward foreign direct investment (FDI) stocks and flows from the developing world have risen dramatically in recent years. The tremendous expansion of less-developed country FDI (LDC FDI) has renewed scholarly interest in the drivers of firm internationalization, and raised questions regarding the economic and social effects of such on home and host countries (Lall, 2003 and Young et al., 1996). In this paper, we examine a crucial aspect of increased internationalization—the environmental effects of LDC FDI on host economies. Prior research finds that multinational corporation (MNC) home-country regulatory frameworks influence host-country firm behavior (Pauly and Reich, 1997 and Vogel, 1995). Rich-country FDI is often viewed favorably because it can convey to host countries policies and practices developed to accommodate stringent home-country regulations (Zeng & Eastin, 2007). This is particularly true with regard to environmental standards (Prakash & Potoski, 2007). Scholarly perspective on LDC FDI is less optimistic. Although a study by the Organization for Economic Cooperation and Development (OECD) finds that “there is no vast difference in approaches to corporate social responsibility between companies in high-income OECD countries and their emerging market peers” (OECD, 2005, p. 4), others suggest that “…the more developed the country the higher incidence of policies in the area of corporate social responsibility” (Welford, 2005, p. 52). If this is the case, then we can distinguish MNCs from developing and transition economies from rich-country MNCs by their lack of knowledge and motivation regarding corporate social responsibility (CSR) issues like environmental protection and fair labor practices (Aykut & Ratha, 2004). There are three reasons for this less sanguine view of less-developed country MNCs (LDC MNCs). First, the international standards diffusion literature suggests that companies mimic policies and practices developed to accommodate home-country regulations in their operations abroad. If LDC MNCs arise out of weak legal and regulatory frameworks at home, then theoretically they should convey weak regulatory practices to host countries. Second, south-south investment, or investment from one developing country to another, is increasing (Aykut and Goldstein, 2007 and Contessi and El-Ghazaly, 2010). If weak home-country regulations engender poor environmental stewardship at home, then weak host-country regulations should compound this effect. The poor state of environmental protection and numerous incidents of corporate environmental mismanagement in the developing world seem to corroborate this view. Third, a relatively large share of LDC MNCs operate in extractive and other resource-intensive industries with poor environmental records, and developing countries often have reputations as bastions of regulatory corruption. Consequently stakeholders are likely to perceive the behavior of these companies, developing country environmental conditions, and the air of corrupt regulatory practices in developing countries as both a cause for and result of unscrupulous LDC MNCs. The influence of poor home-country regulations coupled with LDC MNCs’ mixed environmental record raises important questions regarding the environmental effects of LDC FDI in host countries. Do MNCs from developing countries with relatively weak environmental regulations transfer poor environmental practices abroad? Or, does foreign investment create opportunities for these companies to boost their environmental credentials to the point that they raise the bar for all firms? This paper addresses these questions by empirically testing the effects of LDC FDI on host-country adoption rates of ISO 14001, the most prevalent voluntary corporate environmental regulatory program in the world. Contrary to conventional wisdom, our findings suggest that on average LDC FDI does not convey poor corporate environmental practices to investments abroad. Indeed, FDI from developing countries can actually increase the level of environmental stewardship of all host-country firms. Our argument is twofold. First, we contend that financial concerns motivate LDC MNCs to demonstrate their commitment to environmental protection to stakeholders by adopting voluntary EMSs such as ISO 14001. Thus, LDC FDI can elevate host-country environmental standards because LDC MNCs themselves are increasingly becoming ISO 14001 certified. However, because we use the accumulation of FDI stock in host countries as our key independent variable, increasing LDC FDI flows cannot account for the whole story. Thus, the second portion of our argument suggests that increased LDC MNC ISO 14001 adoption can create spillover effects in host markets, leading other host-country firms to elevate their commitment to environmental protection. Spillover effects result from the competitive advantages conferred on companies who adopt ISO 14001, and from the change in normative expectations of host-country stakeholders regarding corporate environmental stewardship. While we expect the investing-up argument to apply to both developed and developing host-country contexts, we expect the spillover effects to be most prominent in the latter because there exists more room for upward competitive pressure to exert a visible effect, particularly with regard to changing consumer beliefs and expectations regarding CSR. Our empirical results lend support to these conjectures. In the following sections, we discuss competing theoretical perspectives, outline our argument regarding LDC MNC ISO 14001 adoption and the positive environmental spillover effects of increased LDC FDI, and discuss our data and statistical analysis.

This paper addresses the environmental effects of FDI from developing countries. We argue that MNCs from developing countries are constrained by reputational and financial considerations to adopt environmentally friendly policies in their overseas operations, despite relatively weak legal and regulatory frameworks in both home and host countries. Public awareness of MNCs’ corporate environmental policies and performance in host countries may enhance a company’s long-term competitiveness by improving its access to finance, partners, and markets, and by reducing exposure to operational and legal risks. Developing-country firms that fail to adhere to stringent environmental standards risk diminished sources of funding, rejection by developed-country MNCs as potential business partners, and a loss of market access. Moreover, as developing-world firms face direct competition with developed-country firms in emerging markets, the environmental norms and operating standards that bind the latter’s behavior should exert upward pressure on the former’s environmental conduct in all markets of operation. In other words, as the adoption of environmentally friendly policies has become the norm for global firms, MNCs from developing and transition economies will engage in similar practices in order to compete successfully in the global markets. We further suggest that when LDC MNCs meet or exceed local environmental mandates in overseas operations, it generates competitive pressure that can compel domestic host country firms to improve their own environmental practices through EMS adoption. The competitive environmental behavior of LDC MNCs, coupled with the potential for positive spillover in host economies, should exert upward pressure on the local environment. We expect such spillover effects to be most prominent in developing- host countries as domestic firms can stand to capture greater gains from the transfer of environmental norms. Our empirical analyses of the environmental effects of FDI from developing countries lend support to this conjecture, suggesting that even after controlling for other potentially confounding factors, developing-country FDI is associated with lower levels of emissions and higher voluntary environmental management systems adoption rates in host countries. This paper contributes to the literature on policy diffusion (Guler et al., 2002 and Prakash and Potoski, 2006) and on voluntary programs (Coglianese & Nash, 2001) by examining the environmental effects of foreign direct investment from developing countries. Our findings challenge the notion that developing-country investors behave irresponsibly in host country markets. Rather, they suggest that developing-country investors, similar to those in the developed world, exhibit the same (or greater) levels of ISO adoptions in their home and host operations. Furthermore, reputational and financial considerations and global market competition can induce environmental stewardship by developing-country multinationals. Thus globalization critics might need to revisit existing conceptualizations of the effects of global market integration. Future studies could examine the behavior of LDC MNCs in other issue areas such as labor rights and social practices to see if the dynamics described above can be generalized to other issue areas.