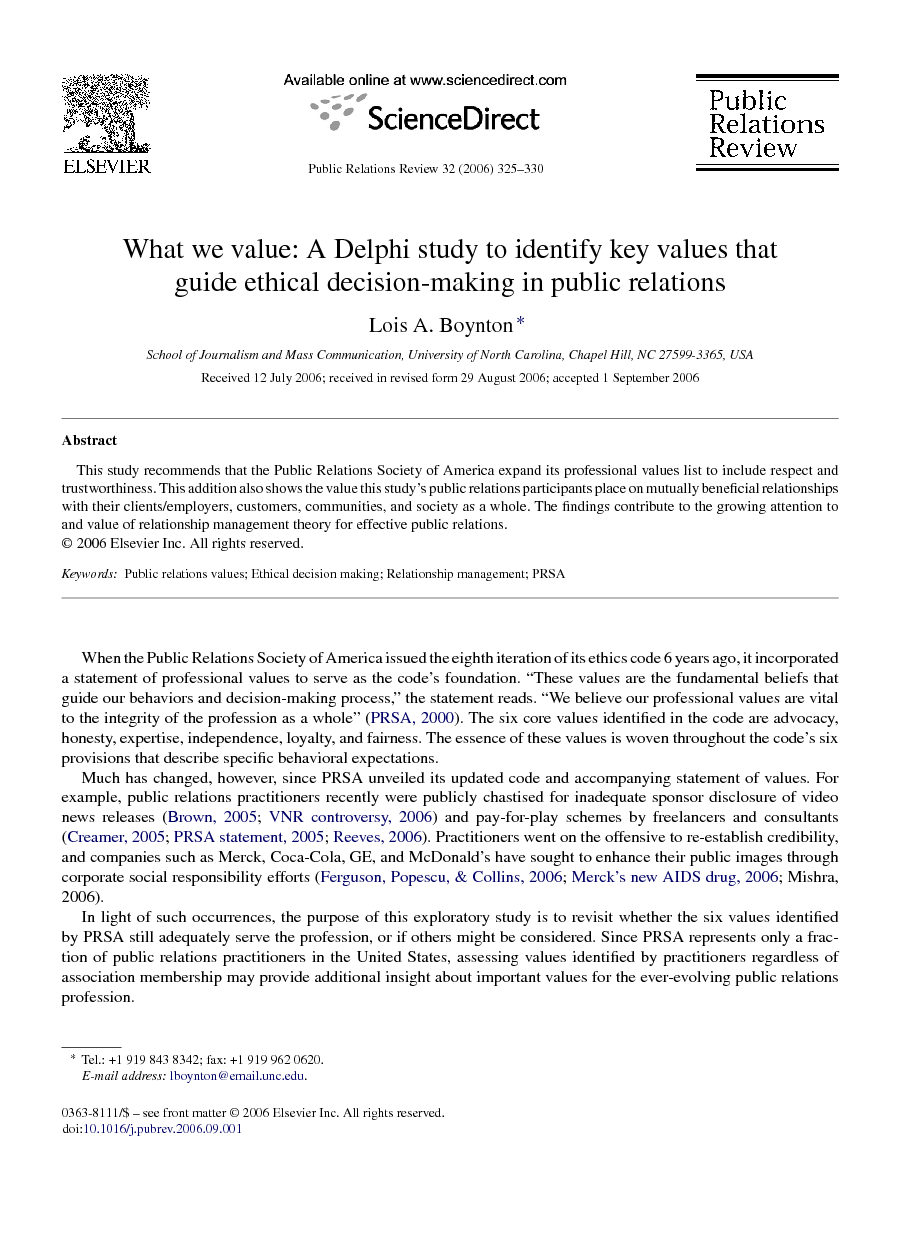 This study recommends that the Public Relations Society of America expand its professional values list to include respect and trustworthiness. This addition also shows the value this study's public relations participants place on mutually beneficial relationships with their clients/employers, customers, communities, and society as a whole. The findings contribute to the growing attention to and value of relationship management theory for effective public relations.

When the Public Relations Society of America issued the eighth iteration of its ethics code 6 years ago, it incorporated a statement of professional values to serve as the code's foundation. “These values are the fundamental beliefs that guide our behaviors and decision-making process,” the statement reads. “We believe our professional values are vital to the integrity of the profession as a whole” (PRSA, 2000). The six core values identified in the code are advocacy, honesty, expertise, independence, loyalty, and fairness. The essence of these values is woven throughout the code's six provisions that describe specific behavioral expectations. Much has changed, however, since PRSA unveiled its updated code and accompanying statement of values. For example, public relations practitioners recently were publicly chastised for inadequate sponsor disclosure of video news releases (Brown, 2005; VNR controversy, 2006) and pay-for-play schemes by freelancers and consultants (Creamer, 2005; PRSA statement, 2005; Reeves, 2006). Practitioners went on the offensive to re-establish credibility, and companies such as Merck, Coca-Cola, GE, and McDonald's have sought to enhance their public images through corporate social responsibility efforts (Ferguson, Popescu, & Collins, 2006; Merck's new AIDS drug, 2006; Mishra, 2006). In light of such occurrences, the purpose of this exploratory study is to revisit whether the six values identified by PRSA still adequately serve the profession, or if others might be considered. Since PRSA represents only a fraction of public relations practitioners in the United States, assessing values identified by practitioners regardless of association membership may provide additional insight about important values for the ever-evolving public relations profession.

The study's first research question asked, “What values do public relations practitioners believe are most important for their profession?” The exploratory Delphi study to identify key professional values produced a rather extensive list of 70 items. Grouping similar values as part of the data analysis resulted in 11 categories. These 11 values generally are consistent with those identified by the Public Relations Society of America (2000) statement of professional values (see Fig. 1). The Delphi study's identification of honesty, loyalty, and fairness corresponds directly to three of PRSA's six values. The professionalism and technical proficiency categories correspond to the PRSA value of expertise, and the open-mindedness category reflects the PRSA value of independence. Four additional groups of values produced by the Delphi study and not part of the PRSA list are respect, trustworthiness, accessibility, and proactivity. There were no surprises among the list of values, except perhaps for the inclusion of the term “ethical,” which one practitioner included for the first, open-ended question despite the survey introduction that explained the study purpose to identify values used in ethical decision-making. The term will not be included in subsequent research. The second research question asked, “Do these values reflect mutuality and reciprocity as advocated by relationship management?” Results showed that respondents consider mutuality as integral to ethical public relations practices, and these values reflect the dimensions of relationship management espoused by Ledingham (2006) and others—trust, openness, involvement in community welfare, community investment, and community commitment. Five of the 11 values that emerged from this study show some degree of mutuality—honesty, respect, trustworthiness, fairness, and accessibility (see Fig. 2). Two of these values correspond directly to dimensions of relationship management—trust and openness. Proactivity supports elements of involvement in community welfare, and respect supports both the community investment and community commitment dimensions of relationship management (Dimmick, Bell, Burgiss, & Ragsdale, 2000; Ledingham, 2006).